Tate Brown, a former athletic standout at Owen High School, died June 14 after a year and a half battle with testicular cancer. 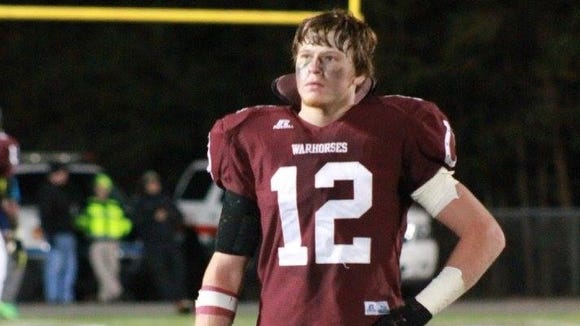 Tate Brown, a former athletic standout at Owen High School, died June 14 after a year and a half battle with testicular cancer. He was 22.

Brown, who signed with East Carolina to play college football, was diagnosed with stage 3 testicular cancer on New Year's Day 2019.

"When I came to Owen in 2015, one of the first things I did was watch game film from the 2014 season," Owen football coach Nathan Padgett said. "I remember saying to myself, 'I would have loved to coach Tate.' He is a perfect example of what it means to be a Warhorse football player. He fought cancer the way he played football. Fearless, dedicated, committed and fought with everything he had."

Brown was an All-WNC football selection his senior year after the 2014 season. He earned All-Western Highlands Conference honors after making 97 tackles (13 for a loss) and six sacks. Owen went 12-1 and advanced three rounds deep in the NCHSAA state playoffs in 2014.

Jager Gardner, a former teammate and close friend with Brown, took to Facebook to share his feelings about Brown.

"The memories we made I will never ever forget," Gardner said. "My heart is broken. It has been broken for a long time now. But I know you're not in pain anymore, brother. You fought like nobody I've ever known."

David Thompson is an award-winning reporter for the Citizen Times. He can be reached at dthompson@citizentimes.com, at 828-231-1747, or on Twitter at @acthshuddle.