Two things came to mind immediately when I learned Kenny Ford would be inducted into the Swannanoa, Black Mountain and C.D. Owen High Schools Hall of Fame before the Warhorses host Avery on Friday, Oct. 19. I knew I better get busy on that story, but I also couldn’t wait to be there to see it happen.

I’d just started my dream job at The Black Mountain News a couple of months after the Warhorses finished the 2013 season 9-3.

Having been a loyal reader of the local paper for years, I was aware of what an iconic figure Kenny Ford was in the Swannanoa Valley. Plus, long before I’d formally met the man who won 230 games as the head football coach at Owen, my wife and I were somehow permitted to stay in the old Watershed, currently the Trailhead, for his 50th birthday party. The event was closed to the public but, having just moved to town, we wandered in to watch an Alabama game and were allowed to stay for some reason.

That day former mayor Carl Bartlett, an Owen alumnus and athletics icon in his own right who has been in the Owen press box since the 1970s, read a proclamation declaring it Kenny Ford Day in Black Mountain. Everyone went crazy and even though I wasn’t familiar with all of the history, that moment helped confirm this was the kind of place I wanted to be.

Those memories were bouncing around in my head the first time I reached out to Coach Ford in March of 2014. I needed pictures for a track and field story for the sports section and Owen was scheduled to host a meet at home later that day. The wind and cold were brutal, but I called him to find out if the meet was still on.

“Hello,” I heard a voice scream into the phone over the howling wind.

“Hey Coach Ford, it’s Fred McCormick with The Black Mountain News,” I replied. “I’m working on a story this week about the track and field team and I’m going to need to get pictures. Is today’s track meet still on?”

There was a pause that was mostly 20- or 30-mile-per-hour wind gusts blowing into a phone.

“Son, I’m out here chasing my mat around this field and I can’t feel my fingers and you’re wondering if we’re having a track meet today?”

I didn’t know what to say.

“No,” I could almost feel the smile through the phone, “it’s been canceled.”

From there I remember him telling me “you sure did start at a good time,” as he went on to say that he expected “one hell of a season” for the Warhorses that fall.

It was immediately clear to me that this man, who graduated from Owen and played football for the Warhorses, was doing his dream job. I’ve felt a connection to Coach Ford since.

He was excited about an upcoming senior class that included a player he thought was about to be one of the best in the history of Western North Carolina. Of course, I would have a tremendous view for the magnificent senior season of Jager Gardner, who would become the region’s all-time leading rusher that year on his way to a ridiculous 3,416 all-purpose yards.

A lot of people look for signs that they’re doing what they’re supposed to do or in the right place in their lives, but when the 2014 football season began in front of an electric crowd at Warhorse Stadium and I was on the sidelines taking picture, I was pretty sure I’d never have to wonder any of that again.

I went to every game that season but two: week two in Brevard and the final regular season game on Halloween in Polk County. Instead I followed the live blog on the High School Huddle as my wife and I took my daughter trick or treating. The Warhorses won, 35-0.

I got to know that class of seniors and their story, which started at Owen Middle School on Shuford Field, a place near and dear to Ford’s heart. That group showed so much potential, the coach, who was already a legend in the Swannanoa Valley, told them he’d stay on to coach the through their senior season if they committed to playing hard for him.

That commitment to one another was never more apparent than on Sept. 5, 2014. I was there fumbling with a Canon EOS Rebel T2i on the field at Reynolds, who the Warhorses hadn’t beaten since 2004.

I saw Jager, Sam Drummond, Zee Johnston, Dexter Andrews, Chris McHone, Tate Brown, Taylor Frizsell and company, utterly exhausted, hold on for a 30-21 win against a team that had beaten them for nine straight years.

Sitting on the field, because his aching back wouldn’t allow him to stand, Kenny Ford talked to the press. He would sit there until the stadium’s lights were turned off, grinning from ear to ear. 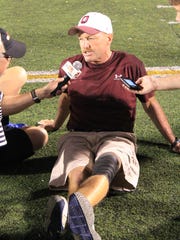 Kenny Ford sits on the field at Reynolds in 2014, after his Warhorses beat the Rockets to snap a 9-game losing streak against the rival school. Ford would sit there until the lights in the stadium were turned off. (Photo: Photo by Fred McCormick)

I saw tears on the faces on some of those players on the field that night. Tears fell again in the weight room at Owen on March 26, 2015, when Coach Ford told his players that after 29 seasons, he wouldn’t be back in the fall. It was the end of an era.

I caught a mere glimpse of the Kenny Ford era at Owen, but there was no denying the magic.

When Ford retired I remember thinking that it would be nice if I was still around at The Black Mountain News to cover him when he was inducted into the school’s hall of fame.