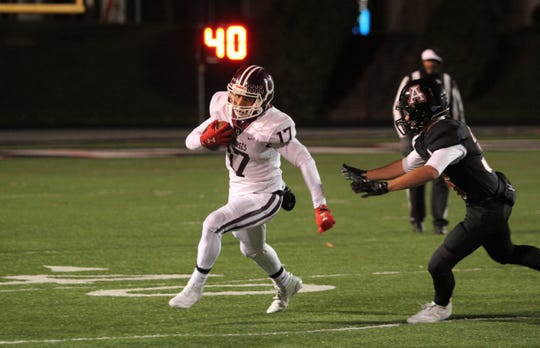 Temperatures plummeted inside MacDonald Stadium in Newland, Nov. 1, but the freezing weather did little to cool off a hot Owen offense.

The Warhorses scored a season-high 54 points in a Western Highlands Conference victory over Avery to improve to 5-4 on the year.

The Owen defense stifled the Vikings offense on its opening drive and junior quarterback Caleb Scott wasted little time getting the Warhorses on the scoreboard.

Scott his senior wide receiver Fred Graves for his first of 5 receptions on the night to put the Warhorses in scoring position. Junior Blake Roberts put Owen up 7-0 with a touchdown run on the next play.

Scott would put the Warhorses up by 14 before the end of the quarter with his first of 2 rushing touchdowns in the game.

Led by senior linemen Saevion Gibbs and Jaylin Davidson, the Owen defense continued to disrupt the passing attack of the Vikings before junior Dequan Boyce increased the lead to 21-0 on a long run from scrimmage. Boyce finished the game with 130 yards on 10 carries to lead the Warhorses. 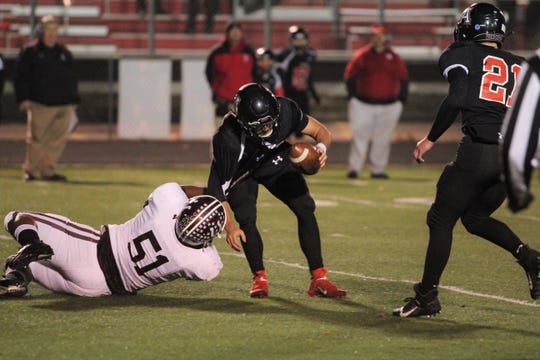 Owen senior defensive lineman Jaylin Davidson brings down Avery quarterback Troy Hoilman, as the Warhorses improve to 5-4 on the season with a 54-32 win over the Vikings. (Photo: Fred McCormick)

Avery responded with a touchdown and cut the lead to 21-6, but a 38-yard touchdown pass from Scott to junior Shavoy Harding would give the Warhorses a 28-12 lead at the half.

Scott opened the second half with a long run to put the Warhorses in scoring position. The quarterback found Graves later in the drive to put Owen up 34-12.

Scott completed 7 passes on 12 attempts for 167 yards and 4 touchdowns against Avery. He also carried the ball 10 times for 107 yards and 2 touchdowns.

The quarterback would again connect with Graves, who collected 129 receiving yards in the game, for another touchdown, putting Owen up 41-12. The duo would connect again to increase the Warhorse lead to 47-12.

Owen head coach Nathan Padgett put in players from the junior varsity roster to open the final quarter against Avery, which cut the Warhorse lead with a pair of fourth quarter touchdowns.

Owen celebrated its 54-32 win in sub-freezing temperatures on the field in Newland.

"You guys did everything right tonight," Padgett told his players after the game. "This was a real team effort."

The victory came a week after the Warhorses fell in the final minutes to Mountain Heritage after leading for much of the second half.

Padgett credited the work of the Owen line in the offensive outburst.

"It all starts up front," he said. "They did a great job up front and we were able to do a lot of things tonight that we hadn't been able to do all season, so I'm super proud of them for playing the way they did. They cleared the way for guys like Caleb Scott, Dequan Boyce, Blake Roberts and the rest to make plays for us." 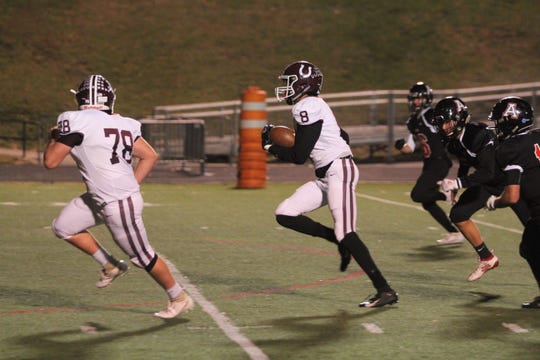 Owen senior Fred Graves pulls away from a group of Avery defenders on his way to the end zone for one of his 3 receiving touchdowns in the 54-32 victory. (Photo: Fred McCormick)

Defensively, Gibbs and Davidson and senior C.J. Gray applied steady pressure to Avery junior quarterback Troy Hoilman throughout the contest. Davidson picked up his fourth sack of the season.

Harding led Owen with 10 tackles and junior Myles Tate, who picked up his second blocked punt of the season, was credited with 8 tackles.

The Warhorses will welcome another conference opponent, 0-10 Madison, to close out the regular season, Friday, Nov. 8.

"We want to finish out strong next week at home for senior night and win another conference game," Padgett said. "Hopefully we can get a decent seed in the playoffs."