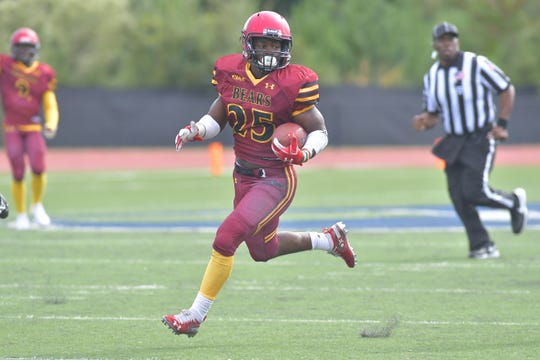 Sidney Gibbs earned his second Rookie of the Week award for his homecoming performance against Livingstone College, in which he picked up more than 220 yards of total offense and tied a Shaw University record with three touchdowns. (Photo: SPECIAL TO BMN/Shaw Athletics, Donald Watkins)

A record-tying homecoming performance by Black Mountain native Sidney Gibbs led Shaw University to a homecoming win over Livingstone College, Oct. 19, as the running back picked up his second Food Lion Rookie of the Week nod in the Central Intercollegiate Athletic Association.

Gibbs, who rushed for a season-high 161 yards in the contest, tied a Bears single-game record with three rushing touchdowns in the 27-20 victory over the Blue Bears.

The freshman carried the ball 21 times against Livingstone, including a 48-yard touchdown run in the third quarter and a 32-yard scoring play in the fourth. He also hauled in 5 receptions for a season-high 63 yards.

Gibbs was recognized as the conference's rookie of the week for the second time this year. He first earned the accolade for his 127-yard performance in a Sept. 28 win over Edward Waters College.

The former Owen High and Christ School standout eclipsed the 100-yard mark for the third time this season, Oct. 26, when the Bears beat Johnson C. Smith University, 36-19, on the road.

Gibbs carried the ball 25 times for 143 yards against the Golden Bulls.

Through eight games for the Bears (4-4), Gibbs has rushed for 732 yards and 7 touchdowns. His 239 receiving yards give him 971 all-purpose yards heading into Shaw's Saturday, Nov. 2 home game against Winston-Salem State.