Warlassies take share of conference title, fall in opening round of playoffs

Despite their loss to Lake Norman Charter in the opening round of the playoffs, the Warlassies exceeded expectations on the tennis courts this year

Warlassies take share of conference title, fall in opening round of playoffs 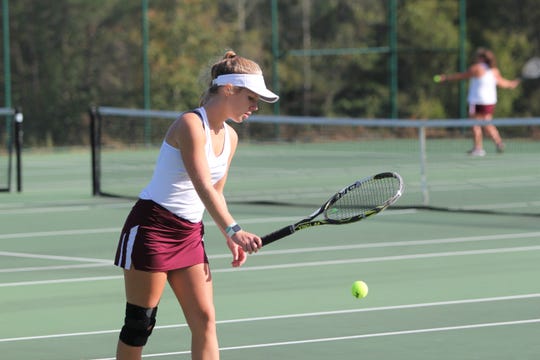 A 5-1 loss in the opening round of the NCHSAA state playoffs wasn't the way the Owen Warlassies tennis team was hoping to end its season, but it did little to take away from the accomplishments of the 2019 Western Highlands Conference Co-Champions.

The Warlassies, led by junior and WHC Co-Player of the Year Anna Sobol, finished the regular season 9-5, picking up their first conference title in recent memory.

"It's the first time in my five years at Owen that we've been able to at least share that conference title," said head coach, Chris Barcklow. "That was a big moment for us."

Owen entered the season with a new-look roster comprised of one senior, three juniors and filled out by seven sophomores and freshmen.

"We had a very young group this season," Barcklow said. "We lost a few players from last year's roster, so we were suddenly young, but they exceeded the expectations I had for them coming into the year."

Sobol, who suffered season-ending knee injuries as a freshman and sophomore, played every match at the number 1 seed for the Warlassies this season. She finished her junior campaign with an 8-7 record in singles matches and compiled an 8-5 record with her doubles partner, Amara Hollifield.

"To come back from what she came back from is nothing short of spectacular," Barcklow said of Sobol. "Just getting back on the court was an accomplishment, so for her to come in and compete at the level she did is really a testament to her hard work and perseverance."

The Warlassies suffered their first conference loss of the season, Sept. 10, to reigning WHC champion Polk. The Wolverines win was their seventh straight against Owen, and set up a key match later in the month. 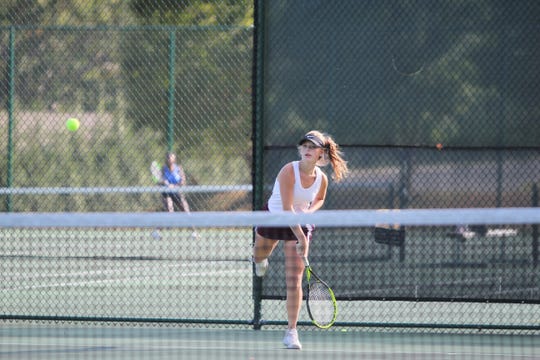 Owen senior and Warlassies co-captain Summer Thoma returns a serve against Sidney Ross of Lake Norman Charter, Oct. 16, as her team falls in the opening round of the state playoffs. (Photo: Fred McCormick)

Sobol faced off against Polk senior and conference co-player of the year Tana Harris in both matches.

"We hadn't beat Polk in four years going into that match," Barcklow said of the Sept. 26 match against the Wolverines. "Anna came through for us big time and had one of her best performances. The young lady she played beat her soundly the first time they met and the second time it was pretty much the other way around."

Owen senior Summer Thoma, who was the co-captain of the Warlassies team with Sobol, finished her four-year tennis career at the school with strong showing. She recorded a 7-7 record as the teams number 2 seed and went 1-0 in her only match as a number 3. She also posted an 8-6 record as a member of her doubles team.

"Summer is our only senior and she's going to be sorely missed," Barcklow said. "She never missed a practice or a match in her four years for this program, and

The Warlassies closed out the conference season by defeating Mountain Heritage and Avery, each for the second time this season. They finished with a 5-1 record in the WHC and hosted Lake Norman to open the playoffs.

"It was disappointing to fall in the first round, but that Lake Norman program is a really good one," Barcklow said. "They won the state 2A championship from 2014 - 2016, so they are always tough."

Anna Sobol serves to Lake Norman Charter junior Alicia Bush on Oct. 16, when the Warlassies fell, 5-1, to the Knights in the opening round of the NCHSAA state playoffs. (Photo: Fred McCormick)

"We will come back stronger next season," Barcklow said. "These players did an amazing job this season and all of them are committed to improving on the court. We came into this season with a young team, and now we're trending upward."