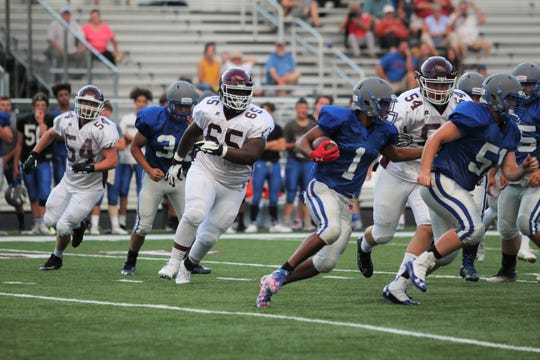 Saevion Gibbs (65) pursues a McDowell runner as the Owen Warhorses prepare for the 2019 season with an Aug. 15 scrimmage against the Titans. (Photo: Fred McCormick)

The intended destination for the Owen Warhorses, who open the 2019 football season on Friday, Aug. 23 at East Henderson, is clear.

“We want to get back to the playoffs,” said senior offensive and defensive lineman Saevion Gibbs. “We want to go deep into the postseason.”

If the road to the NCHSAA State Playoffs lies ahead, it will be paved by Gibbs and his crew in the trenches.

The return of Gibbs, who began his high school football career at Owen as a freshman before spending two seasons with his brother Sidney at Christ School, bolsters an already stout unit.

Fellow seniors Jaylin Davidson and C.J. Gray and juniors Sam Gray and Eli Brasher round out the starting offensive line for Owen.

“We’re bringing back several starters in that group, from both sides of the ball,” said head coach Nathan Padgett. “Then you add Saevion, who brings leadership and experience, it also creates depth. We feel like that is a strength of ours heading into the season.”

It’s a key component to a successful team, Padgett added.

“I think games are won and lost up front,” he said. “A good offensive line can make other players on the offense look great.” 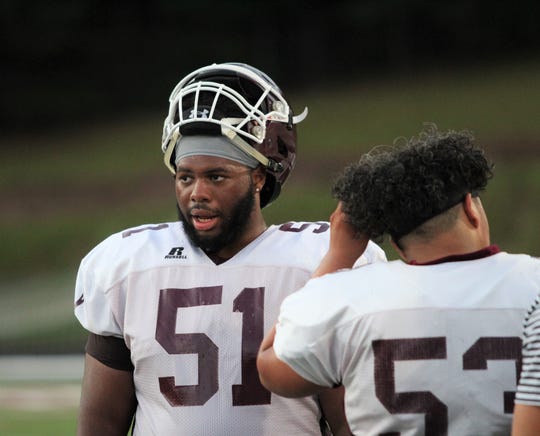 Senior Jaylin Davidson will play a key role on the Owen offensive and defensive lines this season as the Warhorses look to return to the playoffs in 2019. (Photo: Fred McCormick)

Gibbs, who is listed at 6-foot-3, 330 pounds, started for the Christ School as the Greenies finished state runner-up in 2018. He returned to Owen in January.

“I’ve worked hard to get ready for this season, we all have,” he said. “We’re here to play smashmouth football and I don’t think a lot of people want to deal with that these days.”

Davidson, listed at 6-foot, 285-pounds, joined Gibbs in the 1,000-pound club in the weight room this summer. The recognition goes to players whose maximum bench press, squat and clean and jerk total 1,000 pounds or more.

Strength, however, is not the only attribute Davidson and Gibbs possess.

“They’re athletic players,” Padgett said. “They can move well and get out in front to block on the offensive side and apply pressure on defense.”

Gibbs commanded triple teams by the McDowell offensive line, when the Titans came to Warhorse Stadium for a scrimmage on Aug. 15.

C.J., the older brother of Sam, and center for the team, is a physical offensive lineman with a tenacious style of play. Sam, at 5-foot-11-inches and 210 pounds, played in all 11 games for the Warhorses as a sophomore last season.

Basher, a 6-foot-4-inch, 280-pound returning starter, also appeared in all 11 games in 2018 and recorded 40 tackles from the defensive tackle spot.

The group will lead the way for the Warhorse ground attack.

“We’re very physical,” Davidson said. “I think that is going to make our running game stand out.”

While the line will lay the groundwork for Owen as they look to make it back to the postseason for the second consecutive season, how they get there depends largely on junior quarterback Caleb Scott. 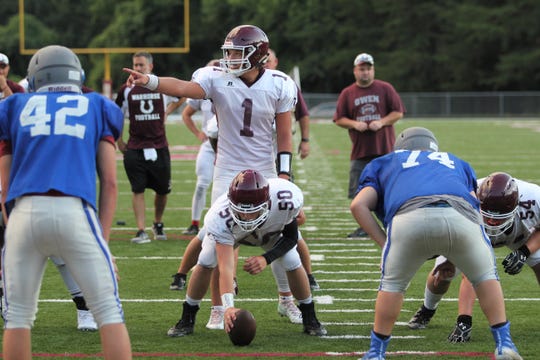 Junior Caleb Scott makes adjustments at the line for the Owen offense on Aug. 15, when the Warhorses hosted McDowell in a scrimmage to prepare for the upcoming season. (Photo: Fred McCormick)

Scott appeared in three games for the varsity squad as a freshman and played in every game last year. He completed 10 passes on 33 attempts backing up starter Audun Meyers, who committed to play for Guilford College.

His experience and 6-foot-2-inch, 225-pound frame complement his athleticism, which was on display against the Titans. One play in the scrimmage saw Scott roll to his right from Owen’s 48-yard-line and launch a pass downfield as a pair of McDowell defenders closed in. The ball hit senior wide receiver Geordon Haggins in stride and resulted in a touchdown for the Warhorses. 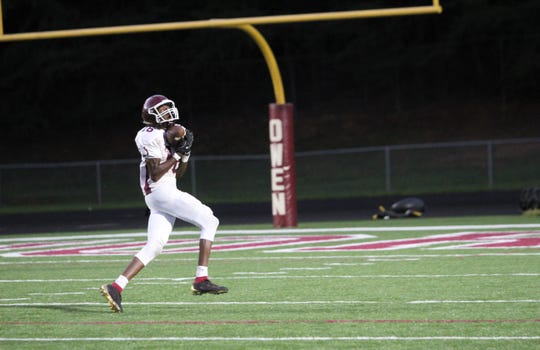 Senior wide receiver Geordan Haggins hauls in a 55-yard pass from Caleb Scott in a scrimmage against McDowell on Aug. 15. (Photo: Fred McCormick)

On another play from the McDowell 40-yard-line, Scott tucked the ball and ran when he was unable to find and open receiver. The scramble resulted in a 26-yard gain.

Scott is eager to play behind the offensive line.

“I have a lot of trust in these guys,” he said. “I feel confident I can do what I need to do back there with this line blocking up front.”

As he takes the reins of the Warhorse offense, Scott’s role will be much different this season.

“He got some action at quarterback last year, behind Audun, but he started for us all season on defense, so he gained some valuable experience,” Padgett said. “In the offseason he’s been committed and he’s been here everyday. He’s the one who gets our offense started; he’s the primer in the engine.”

In an effort to get ready for the season, Scott has been working with former University of Tennessee quarterback Jonathan Crompton.

“I feel like I’m a legitimate threat in the run game,” Scott said. “I’m not just a pocket passer, I like getting people on their heels by running the ball on them and then once they’re anticipating that, I can throw it by them.” 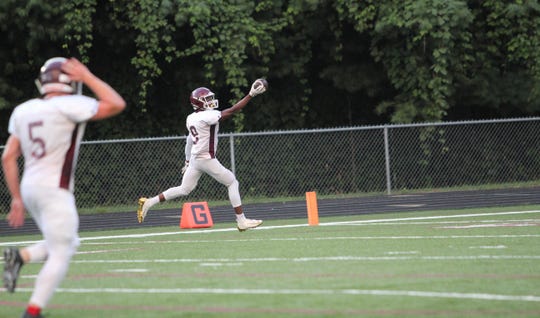 Shavoy Harding crosses the goal line on Aug. 15 as the Warhorses prepare to open the 2019 regular season with a scrimmage against McDowell. (Photo: Fred McCormick)

The quarterback has plenty of weapons at his disposal, according to Padgett.

“We want to get the ball to our athletes and let them make plays,” the coach said.

The backfield will feature junior Shavoy Harding, who brings speed and agility to the running back position.

“He really carried the load for the JV team last year,” Padgett said. “He’s a very elusive runner and when he gets to the next level, he’s very hard to catch in the open field.”

A glimpse of Harding’s speed came in the scrimmage against the Titans when he pulled away from the McDowell defense on a run down the sideline that finished with a touchdown.

The unit also features junior Blake Roberts, whose 5-foot-7-inch frame makes it difficult for defenders to find leverage to bring him down.

“Blake is a tough, physical runner,” Padgett said. “He’ll be our fullback this season and he really excels between the tackles.”

Senior Devon Jennings, who Padgett calls “a load to bring down,” will also be in the backfield mix for Lee’s offense. The receiving corp, which features Haggins, Zeb Lord, Elijah Stevenson, Kegan Lyda and Fred Graves, adds another dynamic to the offensive attack, according to Padgett.

Those options will allow the Warhorses to “spread defenses out, but we can also bring them back in and try to pound them.” 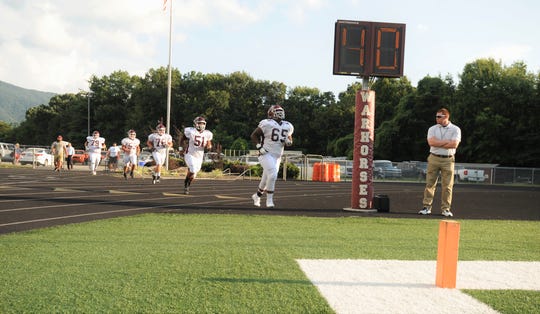 Owen senior Saevion Gibbs (65) leads the offensive line to the field at Warhorse Stadium on Aug. 15, when Owen hosted a scrimmage against McDowell. (Photo: Fred McCormick)

“Pretty much our entire defensive line is back, and we added Saevion at defensive tackle, where he’ll play along Eli Brasher, who played quite a bit at that position as a sophomore,” Padgett said. “That allowed me to move Jaylin to defensive end on the opposite side of C.J. Gray. All of those guys have a lot of playing experience and bring a lot of tackles with them from last season.”

The linebackers include Roberts, the second-leading tackler for Owen in 2018, on the outside. Sam Gray will play in the middle and Scott will return to his outside linebacker position, opposite Roberts.

“Caleb will be playing linebacker for us again this season,” Padgett said. “He’ll have to be able to play both sides of the ball and he knows that.”

He also welcomes the opportunity.

“A lot of people wouldn’t think a quarterback would turn around and play outside linebacker,” Scott said. “I really like hitting people on defense and last year I didn’t play a lot on offense so the defensive side of the ball was my chance to shine. I’m excited about our defense this year.”

Last season the Warhorses finished 4-7 with a 3-2 record in the Western Highlands Conference. They returned to the postseason for the first time since 2014 and want to build on that success in 2019.

“We have an outstanding tradition here at Owen and last year’s third-place finish in the conference was a step in the right direction, but we want to get back on top,” Padgett said. “Our players set goals to win the season opener, win the conference and make the playoffs again.”

Gibbs, Davidson, Basher and the Gray brothers will play a major role in making that happen.

“Our physical style of play is going to be our identity this year,” Gibbs said. “We want to come out strong, play aggressively and keep that going for four quarters every week.”

Offseason workouts for Owen included an increased focus on conditioning, which Padgett believes will help players stay fresh on both sides of the ball. That approach has Davidson eager for the upcoming campaign.

“I feel great, I’m in much better shape than I was last year,” he said. “I’m ready for the season to get started.”