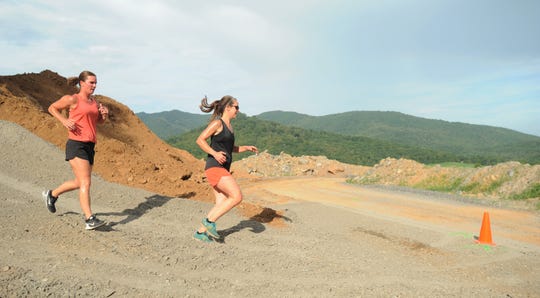 Jennifer Olinger, right, and Tara Mitchell are two of the thousands of athletes who will take the Asheville Spartan Race when it returns to Grove Stone & Sand on July 27 and 28. (Photo: Fred McCormick)

Usually the hardest things in Grove Stone & Sand Co. in Black Mountain are the massive rocks pulled out of the hillsides in the 65-year-old quarry.

But on Saturday, July 27 and Sunday, July 28, when thousands of endurance athletes test their physical and mental limits in the Asheville Super and Sprint Spartan Races, the grueling obstacles they face will feel like a much heavier load.

The task ahead loomed large over more than a few of the runners who showed up to get a glimpse of the course during a group run less than two weeks before the Spartan returns for its fifth year.

"This will be my fourth Spartan Race and fifth event," said Jane Dean, who made the drive from Mills River for a practice run hosted by Grove Stone. "I ran races in Charlotte, Fayetteville, Maryland and I ran the Hurricane Heat in Dallas."

Dean will run the Asheville Sprint, which will take place on Sunday. The three-mile race contains 20 obstacles ranging from a vertical cargo net climb to treks through rushing creeks.

As the site of Western North Carolina's sole Spartan event, the Asheville Spartan gave Dean the opportunity to compete close to home. 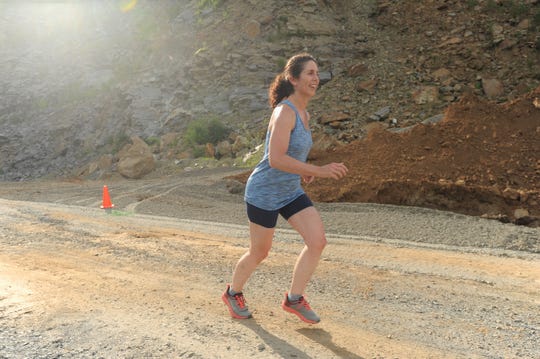 Jane Dean, who will run the Asheville Sprint Spartan Race at Grove Stone & Sand on July 28, makes her way through the quarry during a practice run on July 16. (Photo: Fred McCormick)

"To complete the Trifecta you have to run a Sprint, Super and Beast within the same year," she said. "This race will be my first race toward completing my Trifecta."

Most of Dean's training has taken her to the trails in DuPont State Forest but the practice run at the quarry was an opportunity she didn't want to pass up.

The practice runs at Grove Stone originated as a way for runners to prepare for the Rock the Quarry Trail Challenge 5K, an annual fundraiser for Black Mountain Home for Children and the Asheville Museum of Science. Jon Neumann, the vice president of sales for Hedrick Industries, which owns Grove Stone, organizes the race that attracts more than 350 runners each year. Rock the Quarry will return for its 12th year on Saturday, Sept. 14.

"It's such a unique place to run," Neumann said of the quarry, "so we like to hold a few group runs before the Spartan and Rock the Quarry to give people a chance to experience it."

The course takes runners along wooded trails and over streams before climbing high above the valley below and descending through the mouth of the quarry. It's a route Amanda Stackhouse, a Lenoir resident who ran the Asheville Sprint in 2017 and 2018, has come to know well. This year she's set her sights on the Super, an eight-mile race featuring 25 obstacles.

"I've been doing a lot of trail running, so I feel like I'm pretty prepared for the elevation gain," she said of her preparation for the Spartan Race. "I've also done a lot of upper-body work because I don't want to fail many obstacles." 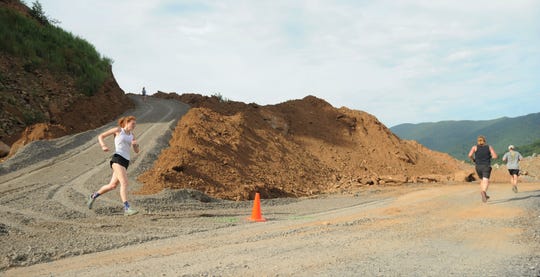 Amanda Stackhouse, who will run the Asheville Super on July 27 and the Sprint on July 28, descends into the quarry at Grove Stone & Sand during a group run on July 16. (Photo: Fred McCormick)

Spartan runners are required to complete 30 burpees before moving on after failing to complete a challenge.

"It can add up to a lot of burpees," said Stackhouse, who will run the Super on Saturday before taking on the Sprint with friends on Sunday. "Since I'm running two days in a row so I'll be trying my best to avoid those."

Having already completed a Sprint this year, Stackhouse will focus most of her effort on a strong showing in the Super.

"I plan on approaching it much more competitively," she said. "My goal for this race is to pass all of the upper-body obstacles like the multi-rig, twister or rings. I want to fail less obstacles than I have in the past."

"I'd like to win my age group in the Sprint," she said.

Jennifer Olinger and Tara Mitchell aren't sure exactly what to expect when they run the Sprint, the first Spartan Race for each of them.

"It's definitely going to be a challenge," Olinger said. "I've run triathlons but never an obstacle course."

Completing the Sprint would allow her to check something off of her bucket list, she said.

"My 15-year-old daughter is a gymnast and she does a lot of athletic stuff so it would be nice to show her that I can do this," Olinger said.

She enlisted Mitchell, who will be running her second obstacle race.

"I don't think they're that intimidating," Mitchell said. "We're going out there to have fun and experience it, so there's no need to stress out about it. If you have to walk some of it, you walk." 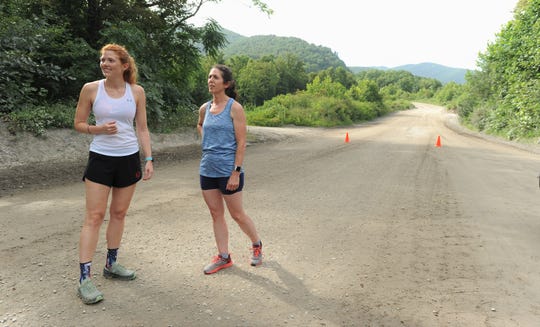 Amanda Stackhouse, left, and Jane Dean get ready to run the trails at Grove Stone & Sand as they prepare for Asheville Spartan Race on July 27 and 28. (Photo: Fred McCormick)

Olinger was eager to get a look at the quarry where the Spartan would take place.

"I personally prefer to go into them blind and not know what to expect," Mitchell said. "But I came out here to support (Olinger) and run with her."

Olinger and Mitchell have the same goals heading into the race.

"We just want to survive, not get hurt and have fun," Mitchell said.

Those are "good goals," said Neumann, who himself has participated in several of the Spartan races.

"This can be a tough course," he said. "But that is a big part of what makes this race so popular."