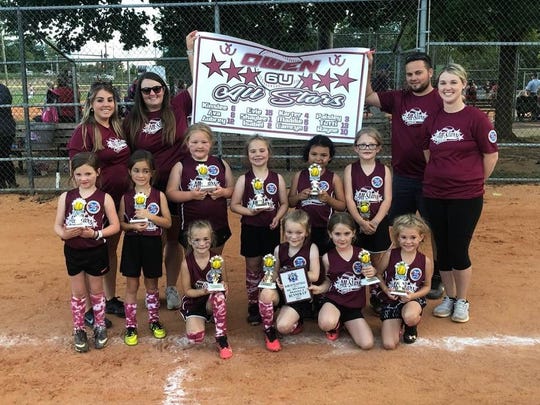 Their faces smeared with eye black, the girls of the Owen 6U All Star team had plenty of reasons to celebrate following their performance in the N.C. Babe Ruth League Western Division District 2 softball tournament at Valley Springs Middle School on June 20.

There was the outburst of offense that resulted in the team eclipsing the 20-run mark twice in a four-game stretch and the shiny trophies the players earned for their second place finish in the tournament. Most importantly, however, there was the fact that the season would continue.

The Owen 6U All Stars will head to Marion on Thursday, July 4, when the Babe Ruth Western Division State Tournament gets underway.

"Oh boy, they're excited," said Jarod McIntosh, who coaches the roster of all-stars with Heather Godfrey, Kristi Young and Tara Hutchins. "They all got trophies, they got a plaque, but they all got to wear eye black for the first time and that's what they thought was the coolest part of it all." 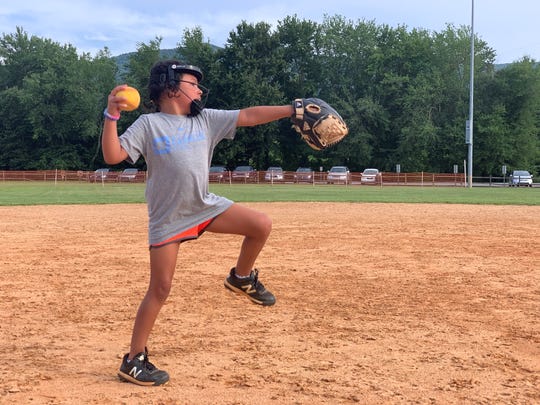 Tutti Priester winds up to throw home during practice for the Owen 6U All-Star team, which will play in the state championship tournament in Marion beginning Thursday, July 4. (Photo: Fred McCormick)

McIntosh coached one of the two Owen 6U softball teams during the regular season. He was joined by the coaches from the league's other 6U team to head up the all-star team.

The coaches selected 12 girls to the roster.

"My team hadn't played softball before this year," McIntosh said. "At first it was like herding cats, but they've learned so much already since the beginning of the regular season. A lot of them went from barely being able to hit the ball off of a tee, to every girl being able to hit without one."

Much like the regular season, the all-star team focuses on the fundamentals of the game.

"We practice a couple of times a week at Veterans Park," McIntosh said. "We work on their hitting: how to stand, where to hold the bat, where their feet need to be and stuff like that. In the field we focus on keeping their gloves down and where to throw and stuff like that." 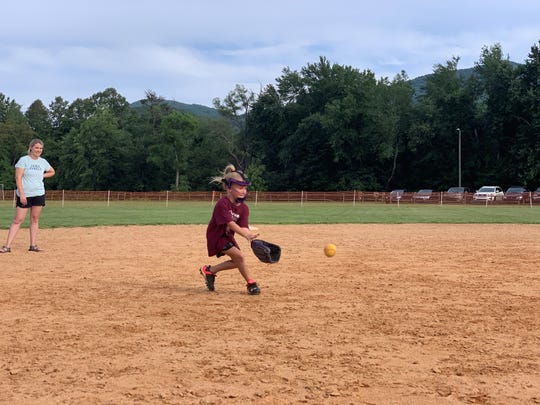 Owen 6U All-Star team member Kinslee Young fields a ground ball at Veterans Park as coach Heather Godfrey looks on. The all-star team will compete in the state championship tournament in Marion on July 4 weekend after finishing second in the District 2 tournament on June 20. (Photo: Fred McCormick)

The coaches also try to make the experience fun for the young players, he added.

"We want them to have a good time and enjoy playing the game," McIntosh said. "If they're doing that it's a really positive experience for all of them."

The team opened up the all-star season by participating in an invitational tournament in Fairview, a week before the District 2 tournament.

"That gave everyone a chance to get used to playing with each other so we could be ready for the district tournament," McIntosh said.

Owen was matched up with McDowell in the opening round of the district championship.

"The all-star games are a little different than the regular season," McIntosh said. "In regular season if you catch the ball you can pretty much run the other player down and tag them. In all-stars the level of competition is better, so you have to make throws and get out in front of the runner."

Owen lost their opening round game, but came back rejuvenated for a doubleheader the next day.

"They really started hitting the ball in our second game against South Buncombe," McIntosh said. "We were down by like 8 or 10 runs and came back to win by 6 or 7. We scored over 20 runs that game." 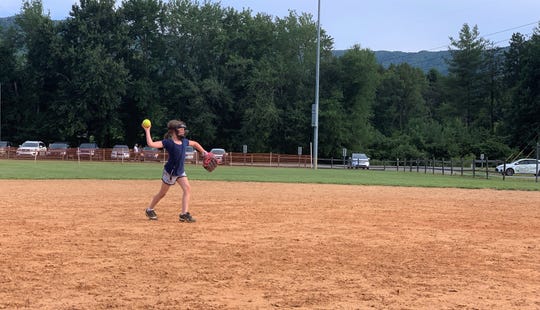 Karter McIntosh, a member of the Owen 6U All-Stars softball team makes a throw in practice, as her team prepares for the state championship tournament in Marion. (Photo: Fred McCormick)

Owen's bats were ringing during the second game of the doubleheader as well.

"We played Fairview in the second game that night and we scored 23 runs to beat them," McIntosh said.

However, McDowell proved once again to be too much for Owen in the championship game.

"We got down, then we went back up and they came back and tied it," McIntosh said. "Then they went up by 1 and we had a few errors, but we played really well."

With the second place finish, Owen qualified for the state championship tournament, where they'll face teams from the western half of the state.

"From the beginning of the year until now the difference is unbelievable," McIntosh said. "These girls have improved so much and it's been fun to see. We're proud of them."