After tearing her ACL twice before her junior year in high school, Owen's Anna Sobol is back on the tennis court

Anna Sobol lines up a backhand during lessons with Bo Webb at Creekside Racquet Club, where the rising junior at Owen High School is returning to the tennis court after suffering a torn ACL last September. (Photo: Fred McCormick)

While many of her peers spent their first day of summer break soaking up the sun and relaxing after a long school year, Anna Sobol was crushing tennis balls at the Creekside Racquet Club in Black Mountain.

Sure, it would be nice if the rising Owen High School junior could sit around and take it easy over the next few months but that's not an option because she's making up for lost time.

Tennis has been part of Sobol's life since she was 5 years old, when she began playing with the Black Mountain Tennis Association's KinderTennis program.

"My dad played tennis and when I was little I was picky about what I wanted to play, but my parents wanted me to play a sport to help build my confidence," she said. "When I started playing tennis I always wanted to go back and I really enjoyed it. At that point, just getting introduced to the sport was a lot of fun."

"There is this feeling you get when you hit a good shot; you really feel good about yourself," Sobol said. "It's only you and your shot, so it's really empowering knowing that it's all on you to do your best and get it right."

Bo Webb, a USPTR and USPTA certified instructor who has been teaching the sport for more than 25 years, started working with Sobol in 2015 when he joined Cheshire Racquet Club as a tennis pro. Webb and a group of partners purchased the club in Black Mountain and rebranded it Creekside Racquet Club around two months ago.

"Anna has a ton of natural ability," said Webb, who was the managing partner and director at the Asheville Racquet Club prior to his arrival in Black Mountain. "When she started with me she had been taking private lessons with my predecessor here, Jean David, for several years."

Webb focused on taking Sobol's game to the next level.

"I wanted to give Anna a more rounded game," Webb said. "I believe in tennis by progression, so if you can play (close to the net) and make your way back, then everything is golden for you." 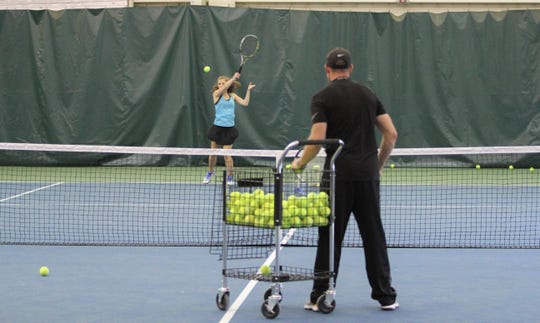 Anna Sobol smashes a forehand as she returns a volley from Bo Webb at Creekside Racquet Club. Sobol, a rising junior at Owen High School, suffered ACL injuries prior to her freshman year and during a match against North Buncombe as a sophomore. (Photo: Fred McCormick)

Sobol's focus and understanding of the game made her a quick study and put her on the radar of Owen High School tennis coach Chris Barcklow.

"Most of the time at Owen our (tennis) players show up raw and new to the sport," he said. "Anna is the exception because she played junior tennis tournaments when I was the president of the Asheville Tennis Association, so I'd known about her for a few years."

As excited as Barcklow was to have Sobol on his roster, few were as eager for her high school debut as the freshman herself in the summer of 2017. However, a freak injury derailed Sobol's plan.

"It was right there," Sobol said pointing a spot near the front of the net on a court in the Creekside indoor facility. "I had just finished eighth grade and I was participating in a clinic and I tore my (anterior cruciate ligament)."

The injury to the major ligament in her left knee Sobol more confused than devastated.

"I didn't really know what it meant at first," she said. "Nobody really tears their ACL until at least high school when they start playing against tougher competition and the sports get harder."

A couple of weeks later, Sobol's ACL was surgically repaired.

"They told me I would be out of tennis for six to nine months," she said.

Throughout her often painful rehabilitation, Sobol never doubted she'd return to the court. The injury didn't keep from supporting her teammates that fall, according to Barcklow.

"She would come out and attend practices and matches," the Warlassies coach said. "She was out there supporting her team, even though missing her freshman season was obviously tough on her."

Anna Sobol sends the ball over the net at Creekside Racquet Club on June 12, as she prepares to return to the tennis court at Owen High School this fall. (Photo: Fred McCormick)

By February of 2018, Sobol was cleared to resume her tennis career.

"I took it slowly at first," she said. "I played some tournaments that summer and the match play helped me make up for lost time and get more experience in that setting."

Sobol entered her sophomore year in the best shape of her life, she said.

"I felt great," Sobol said. "I came in and earned the number 1 seed and everything was coming together."

Teamed with Camryn Bolick, Sobol and her doubles partner were 2-3 against number 1 seeded opponents to open the season. Then, in a September match at North Buncombe against Olivia Shelton, Sobol felt a familiar pain in her other knee.

"I was immediately upset, because I knew," she said. "After having dealt with it the first time I knew there was a specific sound and a specific feeling so there was no doubt in my mind that it was my other ACL."

"It was such a loss on so many levels," he said of the injury. "Her teammates were crying and standing with their mouths open because Anna was clearly in a lot of pain. The whole situation was traumatic for everyone who was involved."

A week later, Sobol returned to the operating table where her other ACL was reconstructed.

"My mom wondered if I wanted to keep playing," she said. "I hadn't really questioned it at all, in my mind I knew I was going to play again."

For the second straight year, Sobol was focusing on rehabilitating a devastating injury.

"It was tough," she said. "I have all of this time and energy invested in the sport, but I've barely been able to play a high school season yet."

That's a particularly bitter pill to swallow for a player with so much potential, Webb said.

"She could be, in my mind, one of the top ranked players in the south had she not suffered these terrible injuries," he said.

In May, Sobol was once again cleared to return to the sport she loves.

"I started with 30-minute lessons with Bo, I've been working with my high school coach and I'm working out every day," she said. "I'm just trying to get stronger and be ready for next season."

Barcklow is impressed by his player's determination.

"Her spirit has remained strong through these setbacks," he said. "She could easily have said 'I don't think this is for me' and hang it up, but instead she wants to prove even more that she can play tennis at a high level."

Learning to once again trust her knees, as Sobol said, has been the hardest part of her return to the court.

"I'm still a little nervous, I have some weird feelings about my knees sometimes," she said. "I never expected any of this so it's hard to say if it will happen again."

Assuming she stays healthy, "the sky is the limit" for Sobol, according to Barcklow.

"She'll have to earn her way back up to the top of the ladder once the season gets underway," he said. "But she has already proven that she's more than capable of overcoming adversity."

Many in Sobol's situation would be discouraged after suffering two ACL tears before their junior year in high school, but she is undeterred.

"I'm starting to get that confidence back," she said. "I'm starting to feel a lot better about my game, and I'm in a good place right now. I'm cleared to return to match play and tournaments start this summer, so I'm really excited for that."