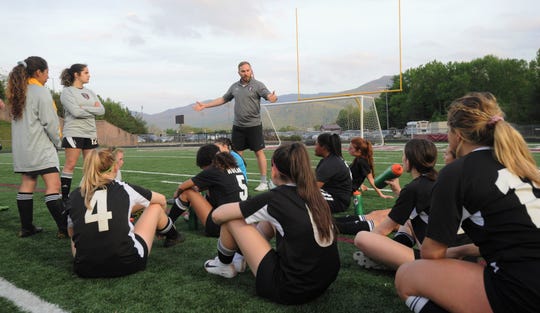 Owen soccer head coach David Fiest talks to his players before a 3-0 victory over Madison on April 29. The head coach of both the Warhorses and Warlassies soccer teams has won 40 straight Western Highlands Conference games over the past two years. (Photo: Fred McCormick)

There was little suspense regarding the outcome of the 2019 Western Highlands Conference girls soccer season when Owen faced off against Mitchell on May 1.

The Warlassies clinched their second straight conference championship in front of their home fans against Madison on April 29, but the team’s 7-0 victory over the Mountaineers in the conference finale was still a monumental one for Owen soccer.

The win marked the second consecutive undefeated (10-0) conference season for the Warlassies, who have outscored WHC foes 100-3 since 2018.

While a 20-game conference winning streak is a rare feat in any sport, it was the second time in six months an Owen soccer team led by head coach David Fiest completed such a run. The Warhorses posted perfect conference marks each of their last two seasons under Fiest, who has been at the helm of the girls and boys teams since taking over the latter in 2013.

Since the fall of 2017, the head coach has guided both teams to a 40-0 record in the conference, outscoring opponents by a combined 187-13. The Warhorses and Warlassies have each punched a ticket to the third round of the state playoffs during that span. 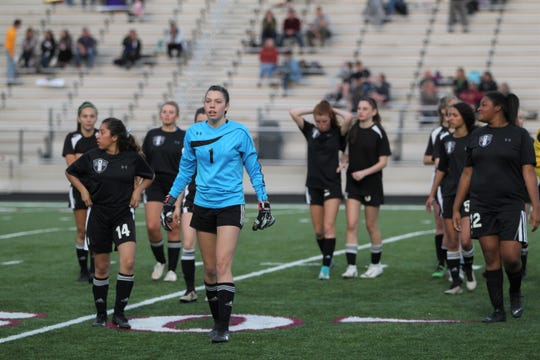 Team captain C.J. Graham (1) leads the Warlassies to the sidelines before the second half of a 3-0 win over Madison on senior night. (Photo: Fred McCormick)

"That kind of run in the boys program and girls programs at the same time is not something I've seen before," said Owen athletic director Anthony Lee. "That's a great accomplishment and something that's never happened here. We're very proud of what coach Fiest has been able to accomplish with these programs."

The Warlassies shut out opponents in 9 of their 10 WHC games in 2018, surrendering only 1 goal to Mitchell. They picked up wins at home in the first and second round of the state playoffs before falling on the road to Salisbury in the third round.

The graduation of six seniors from last year's roster, combined with early season injuries to key players like goalkeeper C.J. Graham, contributed to an 0-2-1 start in 2019. The 2A Warlassies fell 6-0 to 3A Reynolds to open the season and played Providence Academy (Johnson City, Tennessee) to a 0-0 tie. After dropping a 2-0 contest to Pisgah on March 13, the Warlassies picked up their first win of the season with a 3-2 victory over Enka. 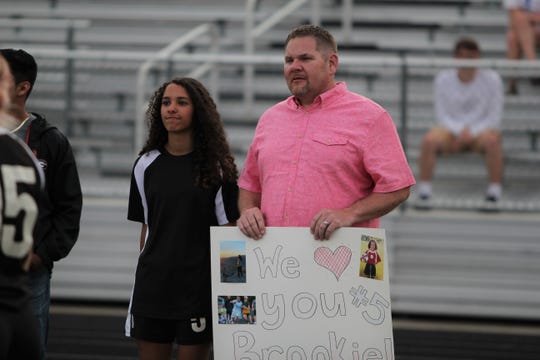 Brooklyn Roland was one of six seniors recognized on April 29 when the Warlassies extended their Western Highlands Conference winning streak to 19 games with a 3-0 win over Madison on senior night. (Photo: Fred McCormick)

They were 2-2-1 heading into their first conference match-up against Mountain Heritage.

As players returned from injuries, Owen began its defense as reigning conference champions with 7-0 victories over the Cougars and Avery on back-to-back nights. Heading into their April 1 match against Polk, the Waralassies had won six straight.

"We had a goal to go out and win conference again this season," senior center defender Brooklynn Roland said. "We were able to beat Polk 3-0 and we'd never beaten them by more than a goal or two, so that win really showed us what we were capable of and I think it pushed us to play even harder."

The Warlassies posted 15 straight wins to close out the regular season with a 15-2-1 mark. The team is playing some of its best soccer yet, said Roland, a four-year member of the varsity squad.

"We had to make so many adjustments early in the year, but once we started getting everyone in the places they were going to be, we started getting more confident," she said. "I think coach Fiest had confidence that we'd be able to get on track."

The coach said the drive to defend their spot at the top of the conference fueled the overall competitiveness of this year's team.

"They have so much drive to do everything they can to defend that top spot they were willing to do whatever they needed to do to keep it going," Fiest said. "Whether it was listening to my expectations or pushing each other to succeed, they were focused on doing the things they needed to do to focus on each game." 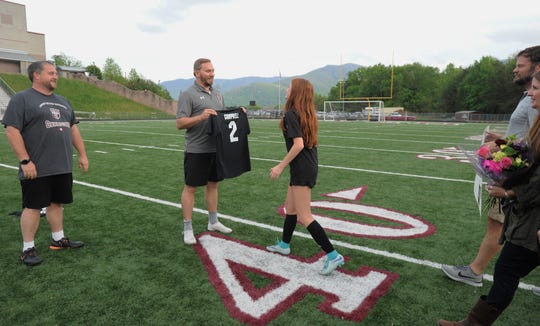 Owen senior Carly Campbell receives a jersey with her last name on the back from Warlassies head coach David Fiest on senior night. (Photo: Fred McCormick)

Fiest's success as a coach of both teams comes as no surprise to Roland.

"He will push you to do your best, but he also makes it fun for us at the same time and we still enjoy playing soccer," she said. "There are some coaches out there who can definitely make you hate the game you've always played, so being able to go out and bond with your teammates and also play the game to win is super rewarding."

The success of Owen soccer has a lot to do with the players who have come through the program, according to Fiest.

"I've been blessed with a great culture that starts with the players," he said. "I get a lot of good players who play soccer year-round and a group of players who mesh well with those players. That helped us establish a winning culture and when you're winning there is always a sense of keeping up that standard."

Lee points to Fiest's ability to keep kids in the soccer programs at Owen as the foundation to the success of both teams.

"He's had kids staying involved year after year and he's really built that program," Lee said. "The kids believe in what he's doing and his players know what he expects from them."

An open-minded approach to coaching has contributed to the consistent success of Owen soccer in recent years, according to Fiest.

"I try to take the players that I have and figure out the best way to attack and defend," he said. "I don't have a set system where I say this is the way it's going to be or anything like that. I try to find my players' strengths and weaknesses and piece together the players in a way that plays to their strengths."

As the Warlassies await the release of the 2019 NCHSAA State Playoff brackets, they have another goal this season.

"We've been able to get to the third round of the playoffs consistently these past few years," Fiest said. "We want to break that barrier this year and make it past that round."

That goal is within reach for the Warlassies, Roland said.

"We know we can compete with anybody when we go out there and play the best we can," she said. " It's a bittersweet feeling knowing that my soccer career here is coming to an end, but it would be really great to reach another goal this season."