The standard for athletic excellence at Montreat College extends beyond the competitive arena.

Respect, responsibility, integrity, servant leadership, sportsmanship and academic achievement are qualities the Cavaliers athletic program seeks to instill in the men and women who wear blue and gold.

On April 12, in the Upper Anderson Auditorium, the 4th Annual Cavalier Court of Excellence recognized the 11 Montreat athletes who best represent those characteristics and more.

Among the 2019 court, nobody better embodied those traits better than senior and four-time All-American track and cross-country star Lydia Wilson.

Lydia brought no track experience to Montreat College when she arrived as a freshman in 2016, having "never stepped on a track," Cavaliers director of cross-country and track and field Jason Lewkowicz said.

It was her mission work after high school that drew the coach's interest. Her first time on a track, against NCAA DI competition, she ran an 18:48. She finished her career holding 11 school records.

"In my time as a coach, I have found that some student-athletes are very rare and hard to come by," Lewkowicz said as he introduced Wilson as his nominee. "(Those) who are highly decorated, yet humble and aware of their platform and use it all to point back to Jesus. I’ve had the honor to coach a student-athlete such as that, and tonight, I am honored to present her to you as our Cavalier Court nominee, Ms. Lydia Wilson."

Athletic director Jose Larios announced the senior as this year's recipient of the award, which was presented to Wilson by Montreat College president Paul Maurer. The crowd responded with a standing ovation.

The international relations major thanked her family and fellow athletes for their support. She thanked God and the Christian liberal arts college for her success. She expressed gratitude to faculty for helping her see the importance of humility in a Jesus Christ-like mindset.

"The past two-and-a-half years that I've been here at Montreat, I've been blessed to witness what this mindset truly looks like when implemented in daily life," Wilson said during her acceptance speech. "Tonight I want to thank the people who fully adopted this lifestyle at Montreat College."

Larios called the 11 representatives, all with a 3.5 GPA or higher, in the Cavalier Court of Excellence "the gold standard of Montreat College athletics."

Prior to the coaches introducing their team representatives, Larios recognized four members of the Cavaliers Hall of Fame in attendance and introduced the 2019 inductees.

Daniel Brunson was induced into the hall for his contributions to the athletic programs at the college. 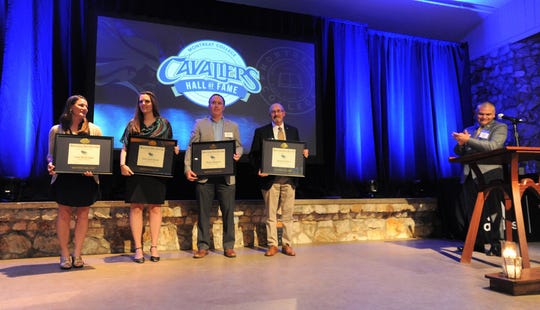 Brunson built the first website for Montreat College athletics in the mid-1990s.

"Since then Daniel has invested over 25 years of taking photographs of all of our athletic teams," Larios said. "Montreat College athletes and athletic events are featured prominently on his website."

Amanda Duncan Hollifield was inducted for her accomplishments as an athlete and administrator.

"She is one of only 15 women's basketball players in the history of the program to score over 1,000 career points," Larios said, as he introduced Hollifield. "She would go on to earn All-Academic honors and was an All-Appalachian Athletic Conference player as well."

More importantly, Larios added, "she stood tall as a pillar and was a steadfast influence in what could be argued was the most successful era of women's basketball at Montreat College."

"In her freshman year she was named a starter and that was a title she never relinquished during her four-year career," he said. "Her statistical accomplishments are too numerous to list. She led her teammates to three conference titles and two trips to the NAIA Championship Tournament."

Brunson and Hollifield were the 19th and 20th Cavaliers Hall of Fame inductees.

The 2019 Cavalier Court of Excellence: