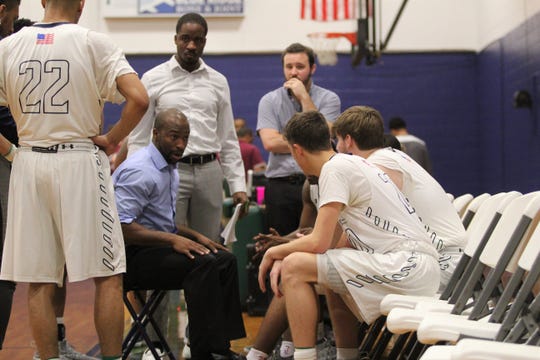 Warren Wilson College head men's basketball coach Anthony Barringer talks to his players during a timeout in a home game against Mars Hill University. The Owls, which play in the USCAA Division II, announced on March 13, they would begin transitioning to NCAA Division III. (Photo: Fred McCormick)

On March 13, Warren Wilson announced that its application for exploratory membership into the National Collegiate Athletic Association (NCAA)’s Division III was approved.

As part of the extended transition into DIII, the Owls will begin an exploratory membership in the upcoming academic year.

“It is a five-year process if all goes well. Next year, 2019-2020 would be our exploratory year,” said Joni Williamson, the director of athletics and adventure sports at Warren Wilson. “It’s our year to explore, and make sure it’s the right fit for us.”

As a result of the move, Warren Wilson will add to its sports offerings, a process that began with the addition of men’s and women’s tennis teams this spring.

If the institution remains under 1,000 in enrollment (it is approximately 680 students at present), it is required to have five men’s and women’s NCAA-sponsored teams, for a total of ten teams. Should enrollment move above 1,000, that number moves to six men’s and women’s teams.

Additional requirements including competing in all three seasons – that is, one sport is active in the fall, winter, and spring at a minimum – and that the college have three team sports and two individual sports.

Warren Wilson will look to add a spring team sport as it currently has three individual sports (swimming, tennis, cross country – all of which also compete on a team basis) and two team sports (soccer, basketball). The Owls’ cycling team will continue to compete as a non-NCAA sport.

The Owls are currently a member of the United States Collegiate Athletic Association (USCAA) DII and will retain a dual-membership while they transitions to Division III. The move will enlarge the name recognition and opponent pool for the college’s sports programs. 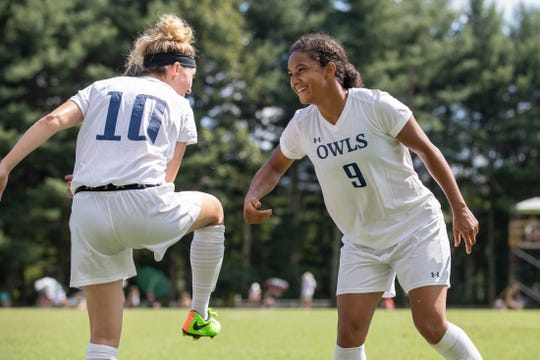 Warren Wilson College will add sports to its current offerings as part of the transition from USCAA DII to NCAA DIII. (Photo: SPECIAL TO BMN)

There are nearly 450 NCAA DIII institutions, whereas USCAA membership is (depending on sport and year) roughly in the 80-100 range, many of which are based in the East/Mid-Atlantic. Its DII is a smaller subset of that group.

While the approval is initially only for exploratory membership, it is a significant step.

“We had to submit an application in January, and it was very extensive in what you have to fill out,” Williamson said. “Part of the application is breaking down all the different parts of the Division III philosophy and talking about how we fit within that. There is also a lot of information about how many sports we’re sponsoring, how many athletes we have, what our competition results are, what does our future look like, and do we have the conditions to support it.”

The application alone, without adding any documents, is nearly 100 pages in length, and when completed by Warren Wilson was approximately 550 pages.

The deadline for submission was Jan. 15, and it was reviewed in late February as part of a standing annual meeting of the NCAA membership committee, which is comprised of athletic directors and administrators from across the country.

Williamson began as the Owls’ athletic director in late May of last year and arrived with extensive NCAA knowledge, including have worked for the Association in academic and membership affairs.

Prior to that she was an associate athletic director at Wittenburg University (Ohio), which is also an NCAA Division III member. She is a former NCAA student-athlete and collegiate coach.

The process of successfully filling out the DIII application began well in advance of the January 15 submission date, and as part of its compilation, Williamson got a feel for the fit for Warren Wilson by checking with a wide range of campus constituents.

“It’s a long process and we looked at ‘Does our president support it?’, Does our board support it? Do our athletes support it?...Is it something we want to put forward?” said Williamson. “So the process wasn’t 'Bam, let’s put it together and submit it in January.' It took a lot of time."

Prior to arriving at Warren Wilson, current president Lynn Morton served at Charlotte’s Queens University, an NCAA Division II institution, and was well-familiar with the Association, as are several members of the school’s existing administration.

Jim Greene is the head of men’s and women’s tennis programs at Warren Wilson, which were added in part as a preparation for potential NCAA membership.

“I’m looking forward to moving to Division III play. The concentration in DIII play is on the student-athlete experience,” said Greene. “We are reducing travel times and practice time to better accommodate the student experience for social interaction and study time, while all the time enjoying the sport that they love.”

In the near future, the transition will have some impact on scheduling.

“We’ll continue to participate against our conference teams as well as teams that we’ve consistently or historically competed against,” Williamson said. “But we are also looking to see what are some NCAA DIII schools that we could potentially compete against and would prepare us for that level.”