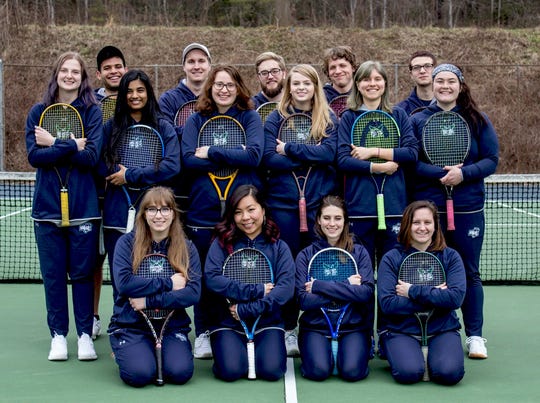 The Warhorses boys tennis team began 2019 with an 0-3 record and was scheduled to play next on March 26 at 4:00 p.m. against Avery County.

The ACA Lions’ baseball team began the season with a 1-2 record and was set to host Hickory Grove Christian last Friday. Freshman Ben Michael got off to an auspicious start, going 3-3 in the Lions’ season opener, while teammate Luke Collier went 2-3 with an RBI in a victory over Asheville School.

The Warren Wilson Owls women’s basketball team bowed out in the first-round of the USCAA tournament with a narrow loss to Penn State Lehigh Valley on March 4, 88-85, in Uniontown, Pennsylvania. They had the opportunity to play in a consolation game the next day against a Davis College (N.Y.) team that was 20-5 coming into the contest. The Owls came away with a 77-62 win to close out the season with an even 15-15 record. Senior Danasia Dumas later earned All-American honors to conclude her record-breaking career.

“I am happy with the turnaround we had after a rough start. Being able to make the USCAA National Tournament for the second consecutive year speaks volumes about the hear this team showed down the stretch,” said head coach, Robin Martin. “Finishing 15-15 is a solid year for us considering the strength of our schedule. This marks the fourth year in a two that we’ve won 15 or more games and that speaks to the consistency and direction of where the program has gone and is going. We have talented athletes and here and I am proud of their grit this year.”

The Warren Wilson new men’s and women’s tennis teams collectively had three matches under their belt as of last Friday. The Owls’ men’s squad was 0-1 as and scheduled to face Covenant College (Ga.) on the road this Thursday. The women’s team was 0-2 and also scheduled to face Covenant this week. The best opportunity to watch the Owls locally is when they travel to Montreat to face the Cavaliers on Saturday, April 13 at 1 p.m. The remainder of Warren Wilson’s matches are on the road in their inaugural seasons.

Montreat men’s basketball fell in the first round of the NAIA National Tournament on March 7 in Sioux Falls, South Dakota. They dropped a 76-63 decision to Mount Vernon Nazarene (Ohio). Nicodemus Payne led the team with 16 points as the Cavaliers’ typically high-scoring offense was largely held at bay by the 27-7 Cougars. Montreat concludes the season with an overall record of 24-8, and the most wins by a Cavalier team in the college’s history.

After splitting a twin bill last week against Cleary University (Mich.) on March 5, the Montreat Cavs’ baseball team was set to travel to Point University (Ga.) last Friday. The Skyhawks opened 2019 with a 15-6 mark and will be a good test for the 8-7 Cavaliers within the Appalachian Athletic Conference (AAC). The Cavs are scheduled to host conference foe Milligan beginning this Friday at 2:00 p.m. for a three-game set that concludes with a doubleheader beginning at 11:00 a.m. on Saturday at Newell Field.