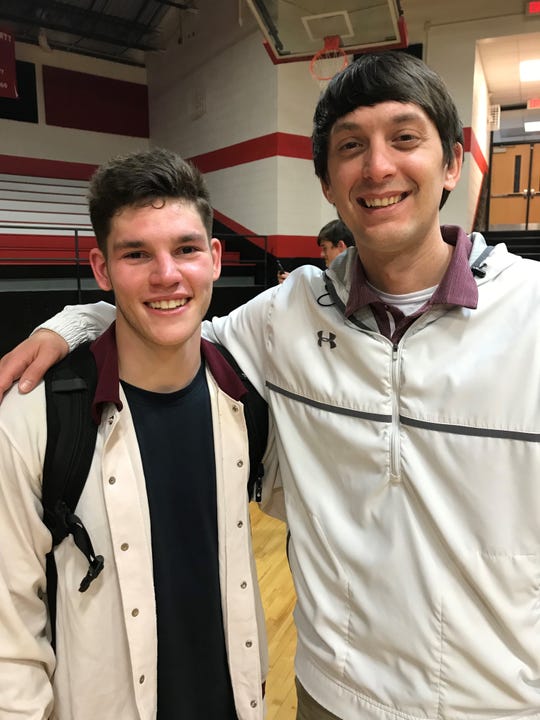 Noah Moore, left, and Warhorse head coach Clint McElrath stand for a picture in Newland after Moore picked up his 1,000th career point in the final seconds of Owen's final game of the season against Avery. (Photo: SPECIAL TO BMN)

A pair of Owen basketball careers ended in dramatic fashion on Feb. 15.

As the Warhorses closed out the season at the Western Highlands Conference tournament in Newland, senior Noah Moore scored his 32nd point of the game with 32 seconds to go in a 73-64 loss on the road against Avery. The bucket gave him exactly 1,000 points for his high school career.

Sixty miles away at Madison High School, which hosted the conference's girls basketball tournament, Chesney Gardner was putting an exclamation point on a remarkable career as she pulled down her 1,000th rebound. 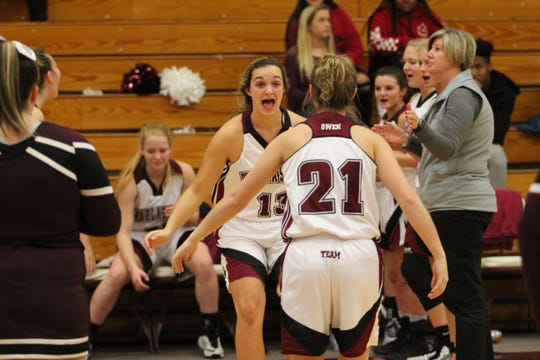 Owen senior Chesney Gardner finished her career with 1,004 rebounds. She surpassed the 1,000 mark on Feb. 15, against Madison. (Photo: Fred McCormick)

Career milestones are nothing new for Gardner, who burst onto the basketball scene at Owen as a freshman in 2015 while averaging 15.9 points and 9.5 rebounds per game. She eclipsed the 1,000-point mark as a junior and finished her career after the 65-38 tournament loss, just shy of 2,000.

As a freshman, Gardner played for former Warlassies head coach Tim Raines. She led the team, which finished 8-14 the season before her arrival, in scoring and rebounding and helped them to a 19-10 record. As a sophomore, she once again posted over 15 points per game and grabbed 9.5 rebounds per contest for the second consecutive year.

She averaged 17 points per game under former coach Aaron Fernandez, in the 2017-18 season. Fernandez left after one year and served as the interim head coach of the Mars Hill University women’s basketball team last season. Gardner picked up her 1,000th career point in December of 2017, as the Warlassies posted a 20-win season for the first time in recent memory.

With the departure of Fernandez, Gardner entered her senior season playing for her third high school coach. Six key seniors also left in 2018, leaving Gardner with a younger surrounding cast.

A few minutes into the first game of her senior season, first-year Warlassies head coach Rusty Smith made a decision that put Gardner on track to have the best season of her career.

“I’ll never forget that game,” Gardner said. “All of the sudden he’s telling me to bring the ball up the floor and I looked at him, looked at the court and said ‘coach, I haven’t played point guard in years.’” 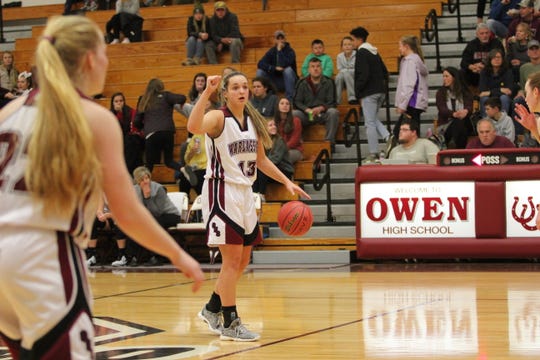 Chesney Gardner brings the ball up the floor for the Warlassies this season. The unexpected position change helped propel her to the best statistical season of her Owen career. (Photo: Fred McCormick)

The University of South Carolina Aiken commit responded to the challenge by putting up a tremendous statistical performance for the 5-20 Warlassies.

She scored a career-high 35 points in the third game of the season and went on to average 26.4 points and 10.1 rebounds per game.

“It definitely helped me grow,” Gardner said of her position change.

Four years as a starter on the varsity team left Gardner with 999 career points heading into what would be her final game.

"I'm not going to say that scoring a basket isn't hard, but most people who can do it are expected to hit 1,000 points," she said. "But it's usually the bigger girls who play down low who are expected to get those rebounds. I'm really proud to do both."

Gardner has set a high standard for future Warlassies with her career numbers. She scored 1,946 points, hitting 595 field goals on 970 attempts for a career percentage of 61. She also hit 96 of 278 attempts from behind the 3-point arc.

As a senior she eclipsed the 30-point mark seven time. On Jan. 22, against Polk, she scored 31 points and grabbed 20 rebounds. A few weeks later against West Henderson, she put up a career-high 38 points and pulled down 21 rebounds.

"I was blessed to have three really good coaches in my time here," Gardner said of her career. "I played with some really talented teammates and everyone pushed me to work hard. These four years have been amazing."

The Warhorses finished the season with an identical record to the Warlassies. Despite the tough year, their senior guard and team leader never backed down. Moore was a sophomore on a 2016-17 team that finished 23-6. He played sparingly that season, largely due to the presence of three 1,000-point career scorers. 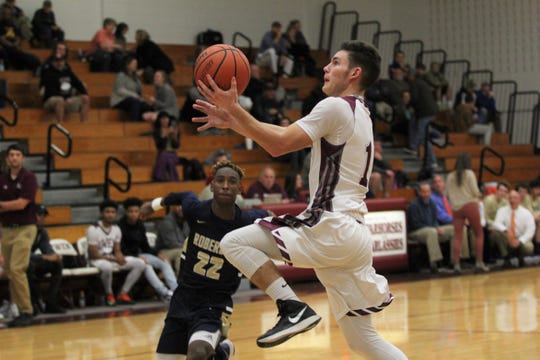 Owen senior Noah Moore, who scored exactly 1,000 points in his Warhorse career, had a career-high 38 against Roberson at home to open the season. (Photo: Fred McCormick)

"I learned so much from Brian Bartlett, Mathew Brown and Ben Craig," said Moore, who averaged 19.9 points per game as a senior. "Watching them all get to 1,000 points really motivated me."

With the loss of those three talented players, Moore led Owen in scoring with 15.2 points per game as a junior. He came into his senior season with 502 points for his career.

"I worked really hard going into my senior season," he said. "I knew 15 points per game wouldn't be enough. I put up at least 200 shots every day that off-season."

It showed, as Moore scored a career-high 38 points against Roberson in front a home crowd to open his senior season. It was the first of six 30-plus-point performances in 2018-19.

Moore can recall each of those games with vivid detail, including the night he scored 34 points against Western Highlands Conference foe Avery, at Owen.

"Beating Avery was a big goal for us this season," he said. "Although we weren't able to do that, it felt good to be able to go out there and have a good night against a rival."

Moore picked up his third big scoring performance of the season against Polk on Jan. 22, when he dropped 35.

"I remember they came out and hit two quick threes," he recalled. "Coach got onto us and we fought hard to beat them."

As memorable as that performance was for Moore, senior night was even more so.

"There were seven seniors on the team so I offered to start the game on the bench so some of the guys who hadn't gotten as much playing time this year could start," he said. "There was a big crowd there and it ended up being a really fun night."

That's because Moore put up 31 points against the Mountaineers and started to believe that 1,000 career points could be within reach. He scored 28 the next night in a loss to West Henderson and again scored 31 less than a week later against Madison.

The sharp-shooting, 5-foot-10 guard knew he would need a big night in the opening round of the conference tournament against the host team to reach the milestone.

"Getting 32 points that night was the final goal for my high school career," Moore said. "I knew it wouldn't be easy, but I also knew I could get it."

He had the green light from head coach Clint McElrath, but as the end of the first quarter approached Moore had yet to score.

"I didn't get a shot to go in until about two minutes left in the first quarter," he said. "I was worried I wouldn't get it, and I told myself to calm down."

Going into the half, Moore heard some good news.

As the final seconds of his high school career ticked off the clock, Moore picked up his 32nd point to give him exactly 1,000 for his career.

"I was emotional after that game," he said. "Avery is such a tough place to play, an I was crying out of sadness that our season was over but also out of joy and relief."

Moore plans to continue his basketball career in college, but has yet to decide where he'll play. He's going to miss the home crowds at Owen the most, he said.

"And Coach (McElrath)," he added. "He gave me the confidence and he worked hard to work with me to get me on track to play in college. I was really lucky to have him as a coach."

Moore is the first player to score 1,000 points under McElrath, who took over the program prior to the 2017-18 season.

"I think it's awesome and a testament to Noah's hard work," the coach said of the accomplishment. "He is a special talent I have truly enjoyed coaching."