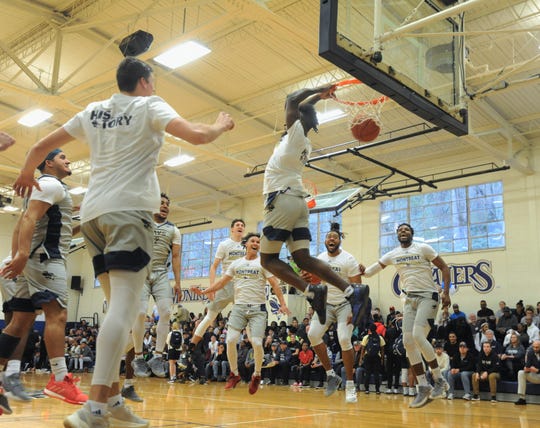 Senior Alonzo Mobley throws down a reverse slam in front of his teammates as the Montreat Cavaliers prepared to take on the Union Bulldogs on Feb. 16. (Photo: Fred McCormick)

Montreat’s fourth-year head coach Garrett Jones, like any college basketball coach, knows the standard parts to look for in a recruit.

“Obviously, you’re looking for guys that can jump high and guys that can shoot and fit that bill. We’re all looking for those guys,” Jones said. “That’s a given, but once you find them, then the next question is ‘Who are they at the core? Where do they believe they get their strength from?’ A lot of that comes down to who they are as a person and what they believe in and if they’re a good fit for our program.”

On Valentine's Day that fit was tested when the Cavs traveled south to face the Columbia International (S.C.) Rams, who joined the Appalachian Athletic Conference this year and upset Montreat, 97-86, on Jan. 10. The Rams shot 57 percent from the field that night, including hitting seven three-pointers. 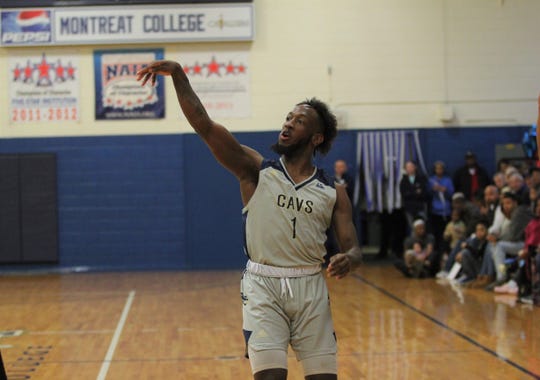 Senior Alonzo Mobley follows through on a shot in his final home game as a Cavalier on Feb. 16. (Photo: Fred McCormick)

Last week’s rematch was crucial, as Montreat needed to win to keep pace with Union College (Ky.) at the top of the AAC and among the leading NAIA Division II programs in the country.

The Cavs, who finished the regular season 21-6 (17-5 in the AAC) took care of business on the weekday road trip, earning a 75-68 victory. Nicodemus Payne led the Montreat starters with 6-10 shooting from the field and 12 points.

Off the bench, 6-foot-7-inch junior Jordan Eaton had the hot hand, hitting on seven of eight and leading all Cavs’ scorers with 15 points. The win set up a showdown last Saturday night against Union at McAlister Gym for the regular season conference title. Union was the 2016-17 NAIA DII national champion and finished last season at number 9 in the country.

After four recruiting cycles at Montreat, Jones has developed the ability to identify a player who can thrive in the Appalachian Athletic Conference (AAC), where parity is the order of the day. Last year, six of the league’s (then) 11 teams finished tied with another conference team in league play, and the entire group was separated by one loss. 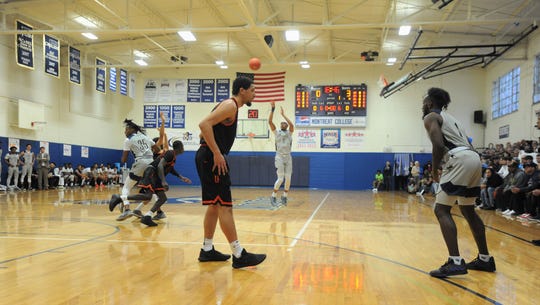 Senior Montreat guard D.J. Caldwell puts up a deep three-pointer in the Cavaliers' 91-62 loss to the Union Bulldogs to close out the regular season on Feb. 16. (Photo: Fred McCormick)

“When it comes down to it, when it gets tough, and it’s a five-minute game, and things aren’t going well, you need an idea of how they’re going to respond in that moment,” Jones said. “So, I think probably the #1 thing we look at is mental toughness and how they handle adversity.”

Jones found it in Terrell Sheffey, a junior cybersecurity major and a stalwart in the Cavs’ backcourt for three seasons. Sheffey is one of three junior starters for the Cavs, along with Austin Butler and Payne.

Seniors Alonzo Mobley and Jeron Hemphill round out the starting five. Four of the five have played alongside each other for three campaigns, with the 6-foot-8-inch Payne a welcome addition this year.

“I believe we’ve done so well this season up to this point because of how close we’ve gotten year after year. We’ve really gelled and become a family on and off the court which has made it easier to play with another,” said Sheffey, who is a steady hand in bringing the ball up court and breaking an opponent’s press.

Montreat forward Nicodemus Payne shoots over a Union defender on Feb. 16, as the Cavaliers fell at home, 91-62. (Photo: Fred McCormick)

He also takes pride in team defense, an unglamorous task that becomes crucial in the postseason, when all teams can score.

“While we’re off the court we preach to one another game after game that we know we can score with the best of them but in order to win we have to stop them from scoring,” added the junior.

Jones is grateful to have experience, but knows Montreat is not unique in the AAC in that category, especially in the postseason.

“I think it’s nice to have guys that have some experience. They’ve had some success and they’ve also had some failures and learning from both of those experiences and trying to understand what we need to do to continue to have success. The flip side of that has a lot of these teams coming up have experience as well,” the coach said.

“We’re now sitting there tied for first, so we’ve completely flipped it. First and foremost, I have to give God glory for bringing us the right people. And the guys are hungry and able to compete at a high level to get us where we’re at now,” Jones said, going into the final game of the regular season. “Second, I have to give the [older] players credit for their work ethic and their commitment to the program after a pretty tough year that first year. I also credit the new guys that came in and gave us a new life to push us to where we’re at now.”

The Cavs finished the season in second in the conference, after falling to Union at home to close out the campaign. They head to Kingsport, Tennessee for the conference tournament, which opens on Thursday, Feb. 21.