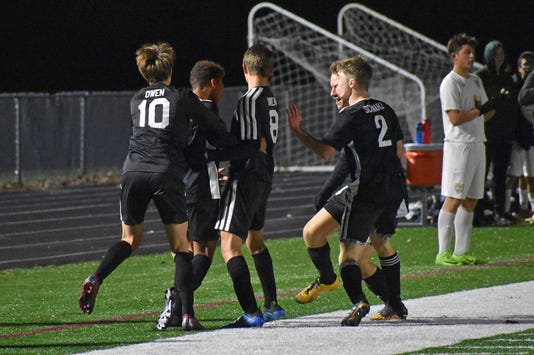 The Warhorses swarm senior teammate Lorenzo Hoover (second from left) following his goal during the NCHSAA 2A playoffs on Nov. 6.(Photo: Tom Flynn)

After the number 8 seeded Warhorses 2-1 double-overtime loss to the ninth-seeded Forest Hills Yellow Jackets on Nov. 5 in a second-round NCHSAA 2A playoff game, the disappointment was visible on the Owen sideline. It ended a season that began in August and saw the Owen boys’ soccer team win 15 of 20 games.

In the playoff game under the lights at Owen, the Yellow Jackets (12-12-1) opened the contest’s scoring 17 minutes in on a goal from sophomore Chandler Perez. At intermission, they held to a 1-0 advantage.

“We definitely made some adjustments. We picked out the players that had the flow of the game and players that were showing for the ball. We took those players and adjusted them,” said Owen head coach, David Fiest. “We tried to keep a good balance offensively and defensively at that point and tried to attack out of that. We didn’t execute tactics smoothly initially, but in the second half and into the overtime periods we were definitely executing tactics.”

In the game’s 73rd minute, Owen senior Lorenzo Hoover, unleashed a shot from 20 yards out and to Castillo’s left and buried the game-tying goal inside the far-right post. That tied the score at 1-1 late in the second half. 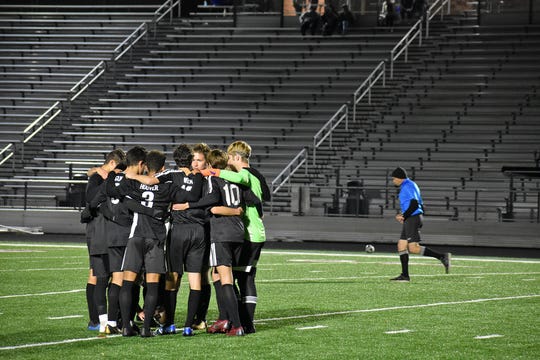 The Owen Warhorses huddle before the second half of their NCHSAA 2A playoff game on Nov. 6 (Photo: Tom Flynn)

“Lorenzo is just a darn good player. He’s got good touch on the ball and he can hold it tight or he can get defenders to jump. He just anticipates so well, and he just goes right by them,” said Fiest. “He just drew in a bunch of defenders, they stabbed, and they gave him half a chance and he put pace on the ball and hit it inside the right post and it went in.”

“It was a textbook finish,” said Fiest. “He did everything right at that point. He had space. He attacked it. He drew defenders and he hit it to the right post with pace. Just textbook.”

After a scoreless extra session, the game-winner came off a scramble following a free kick from just inside the Yellow Jackets’ sideline and gave the visitors the 2-1 victory.

The loss obscured, for the moment, the efforts of a squad that won 13 of their last 14, and ended the 2018 season with a 20-game conference winning streak still intact. Over the past two seasons, Owen has captured 31 wins and two Western Highlands Conference championships.