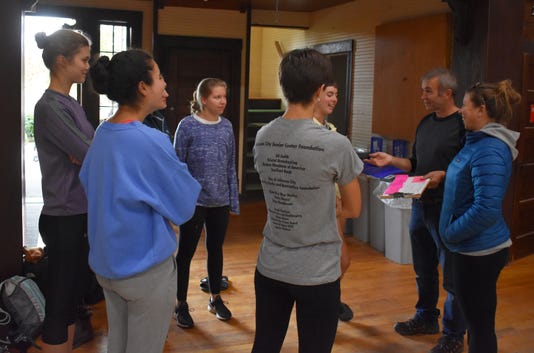 The running trails that ribbon the Warren Wilson College campus aren’t typical in any measure. They encompass flats and hills, pastures and woods, and are set against a mountain panorama few colleges are afforded.

The men’s and women’s cross-country programs that traverse its trails are equally rare and unique. They’re led by eighth-year head coach Bruce Hills. A native New Zealander, Hills first came to running as a teen via the national sports of his home country – rugby.

“I started running as something you did to stay fit to play rugby,” said Hills, 58, who also oversees Warren Wilson’s outdoor education program from his office inside the college’s historic Bryson Gym.

He wasn’t a great runner, but he had a valuable gift afforded any athlete in any sport – a seemingly high baseline talent.

“I wasn’t a big runner – I’d probably just jog three or four miles. Actually, I didn’t jog, I’d run,” said Hills. Despite being ancillary to his rugby he noticed a propensity to move quickly along both trails and roads and stayed with it. “I’ve continued running throughout. I never really stopped.”

“They said the man before me ran the outdoor program and coached, and asked me if I wanted to coach. They knew I was a runner,” said Hills.

“I said ‘sure, I’ll coach.’ So I came into it serendipitously. I’ve been learning to coach ever since,” he said with a smile.

Hills and assistant coach Julie Springsteen give student-athletes an opportunity that doesn’t exist on most campuses – an entry point for competing in a varsity sport at the collegiate level regardless of prior experience. 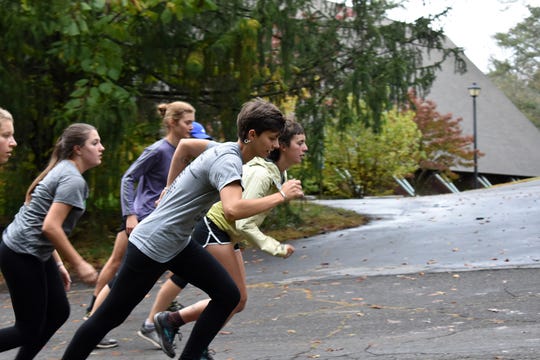 Hills and Springsteen have worked together for the past five seasons. She also comes from an Outward Bound background and is a veteran triathlete. Her vision of the team is also as a place for all runners with the desire to compete.

“We’re a team that, while we value being fast and doing well and PR’ing in races, we also value hard work and strong, consistent efforts,” said Springsteen.

A measure of any program’s effectiveness is reflected in the ability of its athletes to articulate its goals in a meaningful way. With the Owls, that ability is readily evident on both the men’s and women’s teams.

Sophie Willihnganz is a senior leader for the team and in her fourth year with the program. After having mandatory sports as part of her high school curriculum, she was dead-set against continuing sports into college.

“I was done. I was not going to do anything else,” said Willinghanz. “But during orientation week I was hanging out in Bryson [Gym] climbing up the rock wall and someone yells up ‘You look athletic. Do you run?’

“So when I came down Bruce and I had a conversation about what the cross country program at Wilson is all about, and how maybe I should give it a try one more time," she continued. "The family aspect of the team is hugely important. It’s great to have fast people, but we don’t segregate or say ‘you can’t run with us just because you’re not the speed that we want.’ It’s a lot more holistic than that. We care about if you’re being a productive member.”

Following a recent workout, teammates Ellie Goldstein, Sasha Pitkofsky, and Emme McManus all convey variations on a theme – the program meets and embraces runners of all backgrounds.

The men’s side is no different. Junior Samuel Moore came into this season well-trained, sophomore Julian Rohn-Cappellaro arrived this fall admittedly less so, and fellow sophomore and Brooklyn native Ian Heaps came to the Owls, like Willihnganz, eschewing the sport after a less-than-ideal athletic experience in high school.

All three have made dramatic gains under the open running tent that defines and sets apart the Owls’ program.

“Everyone is so supportive here, and no one tries to put anyone down. If someone can’t do a workout as well as another person, we know that they’re still trying,” said Heaps. The sophomore recently set a 5k PR in the 18’s (en route to an 8k finish) after typically hovering in the 20-21 minute range.

“As long as you’re trying, you’re part of the team and we look out for you. Everyone starts in different areas. And some people are faster, and some people are slower, like me at times. But Bruce is incredible, he’s able to know when to push us and also knows when we have been pushed enough because he knows that we know our bodies.”

The Owls head to the USCAA Nationals in Virginia Beach on November 9 to close out their 2018 campaign.