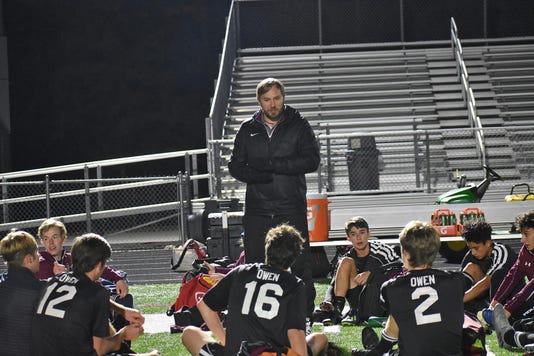 On Oct. 29, as the skies darkened and the temperatures rapidly fell at Owen High, the Warhorses boys’ soccer team defeated Polk County by a narrow 1-0 margin to seal a perfect 10-0 record in the Western Highlands Conference this season.

The team is now 20-0 over the last two seasons in the league and following the game had won 12 straight this season. During the current win streak, they’ve outscored opponents 52-6.

Immediately afterward, the win over the Wolverines (12-10-1) was as much a cause for relief as celebration.

The Warhorses (14-4) roster was depleted by illness, but they managed the game-winner on a header from senior Wyatt Lehman after a perfectly placed corner kick off the foot of freshman Jason Gun. It came in the game’s 35th minute and Owen held Polk County scoreless the rest of the way for the win.

“We had to step up because a lot of us were playing different positions than are normal for us. I know that team coming into it wanted it just as bad as us. It was anyone’s game,” said Lehman. “Jason Gun is just incredible at placing it. I said ‘please just get it to my head if you can’ and he placed it right in the middle of the goal to my head and I just got a lucky flick I guess.”

Under head coach David Fiest, luck is becoming an ever-smaller component of Owen’s fortunes. Throughout both streaks, they’ve maintained a high level of play against both stronger and weaker opponents.

“I think we’ve grown and matured as a team,” said senior Melzer Morgan. “We’ve had some tougher games, and we’ve had some easier games and we’ve faced all of them as well as we could. We put all our effort into every single one.”

Lehman sees the same consistency developing among his teammates.

“Conference-wise, we just have to learn not to play to our opponents. We have to stay above average and just keep it up the whole time. We can’t let our guard down really,” said Lehman. 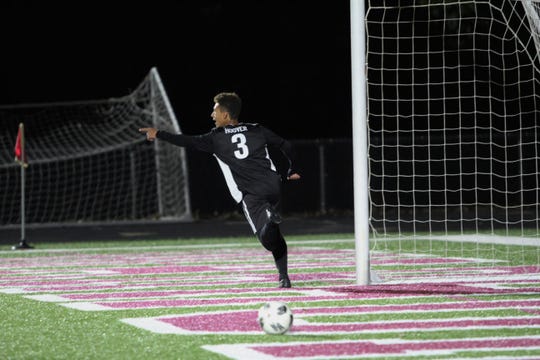 Owen senior Lorenz Hoover celebrates after scoring a goal against Foard High School in a 2-1 Warhorse victory in the opening round of the state playoffs on Nov. 3. (Photo: Fred McCormick)

Fiest foremost credits his players for the team’s success in recent years, and their ability to weather and win games such as the short-handed match against the Wolverines.

“I’ve been here almost ten years and I attribute most of our success to the players – each year we’ve got a group of leaders that pass on the information that we’ve instilled early on,” said Fiest. “And every year it just gets better and better because there’s that much more of an understanding of what needs to happen, and what the program needs.”

Fiest feels he’s the beneficiary of the caliber of players that he directs annually at Owen. “They’re good kids, they’re smart, and they apply. They have a lot of good soccer IQ. They listen, and they can execute tactics and we just build from that,” said Fiest.

“Out here [on the field] they’re challenging each other in practices and they just know what it takes. I’m very blessed with a good group of kids that want it,” said the coach.

That was evident last Monday night. Senior goalie Graham Roy was sharp, turning away three shots for the Warhorses while offensively the team out-pressured the Wolverines and rattled off ten shots to Polk County’s six.

Physically, the Warhorses feel like they can compete with anyone they face. They advanced to the third round of the NCHSAA playoffs last season and the goal this year, and every year, is well beyond.

“A state championship is always a goal for every season. We’ve spent a lot of time talking about a state championship and more time mentally prepping for it than in any of the other years,” said Fiest, noting that winning their upcoming game is always the immediate goal.

The Warhorses beat the Foard Tigers (8-11-3), 2-1, on Nov. 3, at home in the first round of the NCHSAA 2A playoffs. They hosted Forest Hills in the second round on Nov. 6. Results of that game were not available as of deadline.