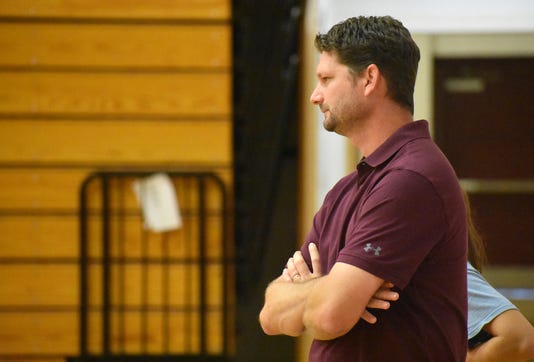 In the pro ranks, typically along with the arrival of a new head coach comes the need to engineer a turnaround. That’s not the case with new Owen girls’ head basketball coach, Rusty Smith.

He’ll inherit a job that will require something between maintaining success and rebuilding, as the Warlassies posted a 20-7 mark last season, but were depleted heavily by the graduation of key starters.

Smith replaces Aaron Fernandez, who successfully led the Warlassies in one season to the second round of the NCHSAA playoffs. He accepted an assistant coaching position at Mars Hill University over the summer.

Smith, 37, already has 18 years of coaching experience, including a prior stint more than a decade ago as the athletic director and varsity boys’ basketball coach at Veritas Christian Academy in Fletcher. From there he returned to his native South Florida, but he and his wife always look for an opportunity to return to the region.

“We loved being up here so we always said if we had the opportunity to come back we would pursuit it,” he said.

He took a role as a physical education teacher at IC-Imagine Charter School in Asheville last year and this season arrives at Owen.

Smith originally had conversations with Owen athletic director Anthony Lee about joining the boys’ basketball program, but during the course of their discussions, the girls’ position came open.

“So the conversation that started as being part of the boys’ program," Smith said. "Then when the girls’ position came open, I applied for that, and the conversation continued to happen and that worked out." 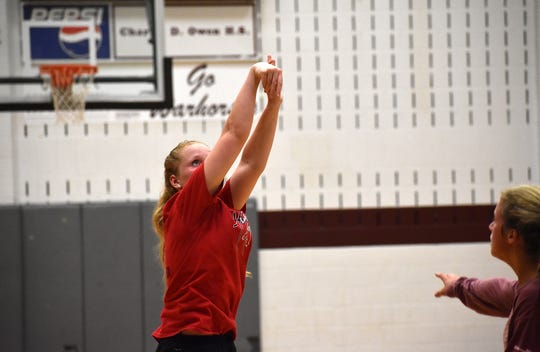 Junior Alyssa Watson follows through on a jumper during an open gym on Oct. 10. (Photo: Tom Flynn)

"Coming up from Florida, he’s coached a lot of different levels of basketball, and I feel like we got a great candidate, who can come in here and hopefully keep our program rolling," he said.

“It’s a big transition for the girls. This will be in some situations their third coach in three years,” said Smith of his arrival. “So lots of transition there, but I’m just going to come in and work hard and try to make it as smooth as possible.”

Smith attended Palm Beach Atlantic University in West Palm Beach, Florida and has coached in Florida, Georgia, and North Carolina, mostly with boys’ varsity programs. His experience spans the ranks of middle school through college, having served as an assistant at PBA.

He graduated high school in Montrose, Colorado, after moving from south Florida and then made the decision to return there for college. “I was never going to be anything more than a small college player, so I got the opportunity to start coaching while I was in college,” said Smith. “I knew I was going to have a much longer career in coaching than I was playing.”

He knows that although he is stepping into a successful program, he’s also stepping into one that could be rebuilding. “Last year I believe we lost five out of the six top contributors. So there will be a lot of opportunity for some girls to step up. Chesney [Gardner] is our leading scorer, and our only returning starter,” said Smith.

Offensively this year, look for the Warlassies to push the ball in transition. Defensively, Smith utilizes a man-to-man “packline” defense, one employed to great effect by the University of Virginia’s Tony Bennett.

“The idea is to eliminate driving lanes and make the other team shoot the ball a lot more,” said Smith. “So you have to make sure you get back in transition. We’re not going to go full-court for 32 minutes and press everybody, but we’re going to make sure defensively we’re getting after it.”

Providing a bridge between Smith and Fernandez, and before Fernandez to long-time head coach Tim Raines is assistant coach, Chastity Simpson.

Simpson graduated Owen in 1996 before attending A-B Tech. She played for the Warlassies under Raines player and spent her first four years as his assistant.

“Coach Fernandez had a different style than Coach Raines. It was a good style – we continued to where we left off when Coach Raines retired,” said Simpson. “We graduated quite a few people last year, so it’s a little built of a building year this season. But it’s a new energy and a new coach and we’re excited to see what he’s going to bring to the program this year. I think we’ll have a good year.”

Simpson will help assess returning talent for Smith, including Gardner. The assistant coach mentioned junior guard Alyssa Watson, sophomore Hannah Fortson, and junior forward Kaitlyn Lambert as players that will be key contributors in the Warlassies’ lineup this season.

While Gardner paced the team with 441 points last year, the Warlassies’ next five leading scorers graduated. The senior is optimistic about the new players that will be beside her and the new coach that will guide her this season. “I think with the new there’s a lot of potential. You see a lot of people making the right moves and they have the desire to do better and to do well,” said Gardner. “I think he’s going to push us to reach the potential that we have here and to be even greater than we imagine.”

“They’ll have their challenges, but I think the potential’s there, and they can be a pretty good basketball team once the dust settles,” said Lee. “I think we got a gem in somebody with the amount of experience that he has.”