The Owen High Warhorses will have to work hard in the summer if they want to win football in the fall.

Rising junior Jaylin Davidson closes in on a tackling wheel during summer workouts for the Warhorses on June 19.(Photo: Fred McCormick)

It hardly feels like football weather in the heat and humidity  going into summer, but that doesn’t matter to the Warhorses.

It’s here and now on the field at Warhorse Stadium, just a few days after the end of the school year, where wins will be earned under the Friday night lights this fall.

Head coach Nathan Padgett told his players to bring “athletic shoes, cleats and a desire to work” to summer workouts, reminding them there was just two months before the team opens the season against Enka High School.

“We want the guys to come out here with the right effort and attitude,” Padgett said June 19, while his players worked out in shorts and helmets. “As a player you control your effort and your attitude, so when we say bring your desire to work, we want you to come in ready to focus on those things.”

The work these young Owen players put in over the summer will establish the foundation on which the team will build before its Aug. 17 opener against the Enka Jets, according to the coach.

“We focus on our strength and skill development over the summer,” Padgett said. “We lift (weights) three days a week, and once we’re in the weight room for about an hour, we take a short water break, and then come out to the field to work on offensive and defensive skills.”

A late ending to the school year, a July 30 start to the football season and a pair of weeklong “dead periods,” in which organized practice is prohibited, will give Padgett and his staff only four weeks to work with the team during the summer, That means it’s crucial that players get the most out of the experience, he said.

Near midfield, Owen offensive coordinator Anthony Lee could be heard saying “do it again” as he works with Warhorse defensive backs on understanding coverage assignments. Rising senior quarterback Audun Meyers, who threw for more than 1,000 yards and 15 touchdowns last season, is reading the defense before making the throw to the open receiver.

A few series later sophomore Caleb Scott, whose big frame and strong arm have him taking reps at quarterback this summer, misses with a throw. Meyers jogs over and talks to him about what went wrong on the play. It’s that kind of approach that Padgett is hoping to see from leaders like Meyers.

“We feel like passing the football next year could be a strength for our team,” Padgett said. “We’re going through the summer evaluating and seeing who wins that position, but you see Audun over there working with Caleb. That’s the kind of attitude we want to see out of our players.”

Soaked in sweat at the end of a hot day of workouts, Meyers is not concerned about who the starting quarterback is next season, he said. He just wants to help the team, which finished 1-9 in 2017, improve.

“Those kinds of decisions are up to the coaches, not any of us,” he said. “Whatever makes this team better is exactly what we need to do.”

Meyers plans to spend the summer mentoring the incoming freshmen and rising sophomores on the team. Strengthening those relationships will not only help the Warhorse next year, he said, but also help build the culture for years to come.

Trenton Messer, another rising senior on the team, agrees with Meyers. He hopes to instill in the younger players on the team that there’s a thin line between winning and losing games. It’s important to “touch the line” when you’re doing drills, he said, because that extra effort is often the key.

The Owen Warhorses break out of their huddle on June 19, the second day of summer workouts for the team. (Photo: Fred McCormick)

“We lost to Enka last year 14-12 in the first game,” said the center and defensive tackle. “There was like a fourth (down) and 5 (yard) play that could’ve helped us win, and we were short by one yard. That one little touch of the line could get us a win in that game.”

But the extra inches it takes to turn losses into wins requires the same effort from everyone, Messer said, which is why summer workouts are a chance to establish chemistry.

“A lot of it is about bonding,” Messer said. “Summer workouts are hard. It’s hot. But if you see somebody who looks like they want to quit, then it's up to you go to him and say ‘hey, this is going to get us prepared for the first game, so you have to get ready.’”

David Shepard is using summer workouts to push himself to develop as a tight end and outside linebacker. 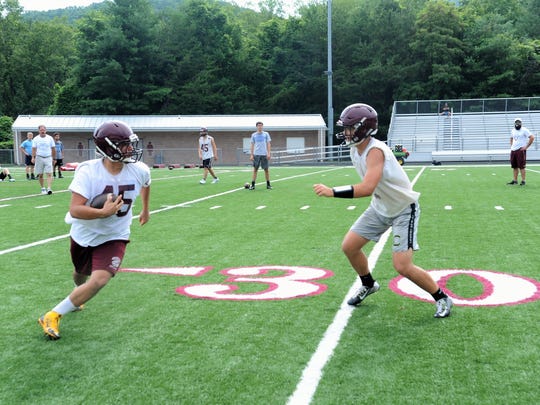 “I plan on giving everything I have to this team,” the rising junior said. “It’s a lot of hard work, but it’s a rough road that leads to greatness.”

There is a “brotherhood” among the Warhorses, he said, and most of the guys are excited to do whatever they can do to establish a winning culture.

“I want us to go out there next season and fight for a spot in the playoffs,” he said. “I want this team to set an example for the young guys coming up in the next few years.”

As summer workouts help the Warhorses “knock a little rust off,” as Messer said, it’s really about building a strong foundation for the upcoming season.

“A lot of us understand what it takes to win at the varsity level,” he said. “If we all come together and do that as one unit, we will win some football games.”