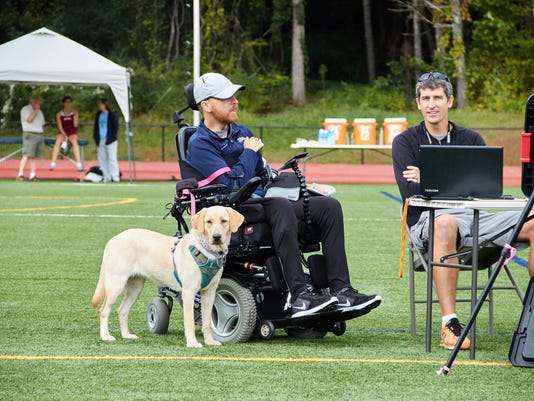 A pair of April events will raise money for Britten Olinger and his family.

For the second straight year the exercise science class at Montreat College will hold a 5K to benefit the school’s track and field coach. A golf tournament, which organizers plan to make an annual event, will collect funds for the family.

The Second Annual Britten Strong Race to Recovery 5K Run/Walk will get underway on the Montreat College Black Mountain campus at 5:30 p.m. Thursday, April 26. The race is organized by students in the exercise science department at the college.

Registration for the race, which can be found at runsignup.com, costs $25 per person and is open until 4 p.m. the day of the event. Shirts and bracelets showing support for Olinger will be sold as well. All of the money raised will go to the family.

The course takes runners and walkers from Montreat’s track in Pulliam Stadium along the trails used by the college’s cross country team.

Last year the inaugural run was sponsored by numerous local businesses, attracted nearly 200 participants and raised more than $7,000 for Olinger, who sustained severe injuries in February 2017 when authorities say a car traveling more than 100 mph hit Olinger's car. The impact left Olinger, who had moved to the Swannanoa Valley six months earlier, paralyzed from the chest down.

The incident ignited an outpouring of support from the local community, which immediately began contributing to a GoFundMe campaign set up to help Olinger and his family. Local businesses organized and hosted fundraisers.

Black Mountain native Eddie Colley is the broker in charge at the Keller Williams office located at the intersection where the Feb. 27 crash occurred. He was shaken by the wreck and instantly knew he wanted to support the Olinger family in some way. His desire to help intensified after he met Olinger's wife Sam and her father at a benefit hosted by Lookout Brewing Co. last year, he said.

Colley worked with Black Mountain architect Maury Hurt and Mike Shoaf, the director of facilities at Montreat College, to completely renovate the Olinger’s home to accommodate his needs.

Colley knows the family will need help beyond what it has already received.

“I got to know Britten and his family through that process, and I wanted to be there for them to help them in any way I could,” he said. “I knew they had a goal to raise $150,000 (through the GoFundMe campaign) originally. But that’s just a drop in the bucket when you look at a life of him being unable to fully go out and support his family.”

Clients, friends and various other community members approached Colley, expressing a desire to support the Olingers, he said.

One of those offers was from an anonymous donor who wanted to donate $10,000.

“I started talking with people I know around town and told them I had an awesome opportunity to raise money to match a donation from a client,” he said. “Someone suggested a golf tournament, and then we had an idea for a silent auction to follow that.”

Colley, his wife Jessica and his assistant, Morgan Ames, began approaching businesses around Black Mountain, many of which were willing to contribute door prizes for the auction.

“We’ve had donations for the silent auction; we have businesses sponsoring holes,” he said. “So far everyone we’ve approached has been really open to the idea and willing to help.”

The Britten Strong Golf Tournament will tee off at 1 p.m. Friday, April 20 at the Black Mountain Golf Course. The event will accommodate 36 teams of four, Colley said.

Colley would like to raise another $3,000-$4,000 through the silent auction following the tournament.

It’s Colley’s hope the tournament will become an annual event.

“(The Olingers) are going to need support from everyone for a very long time,” he said. “There are so many people out there who are looking to help out. Something like this gives people a chance to take a Friday afternoon off and come out to play a round of golf but, more importantly, support a wonderful Black Mountain family.”

For more on the Britten Strong Golf Tournament, go to the event’s Facebook page. To sign up. email Chloe Knight Lunsford at cknight@beverly-hanks.com.