Montreat College junior Jeron Hemphill finishes a fast break with a dunk as the Cavaliers improved to 15-1 on the season with a 114-78 win at home over Tennessee Wesleyan University.(Photo: Fred McCormick)

On Jan. 9 the Montreat College men's basketball team learned it had risen five spots, from number 17 to 12, in the National Association of Intercollegiate Athletics DII Men's Basketball Coaches' Poll.

The next night, with a lopsided victory at home over conference foe Tennessee Wesleyan University in McCalister Gym, the team showed a raucous crowd why it had risen so high.

The Cavaliers came into their Jan. 10 match-up against the Bulldogs with a 7-1 record in the Appalachian Athletic Conference (14-1 overall), in first place above Union College (8-3).

In front of a packed house, Montreat jumped ahead of Tennessee Wesleyan early and never let up, taking a 52-34 lead into the half.

In their first home game since Dec. 2, the Cavs controlled the contest from the opening tip until the final buzzer. They shot nearly 46 percent from beyond the three-point line, significantly higher than their conference-best 36.6 percent.

The 114-78 win over the Athens, Tennessee school - one of their largest margins of victory this season - was the sixth game in which the Cavs have eclipsed the 100-point mark.

The victory was Montreat's sixth straight since suffering  its one official loss of the season, to Union College, then ranked number 2 (the team lost two exhibition games to NCAA Division I schools in December). The game was a chance to play in front of "the best fans in the conference," head coach Garrett Jones said. 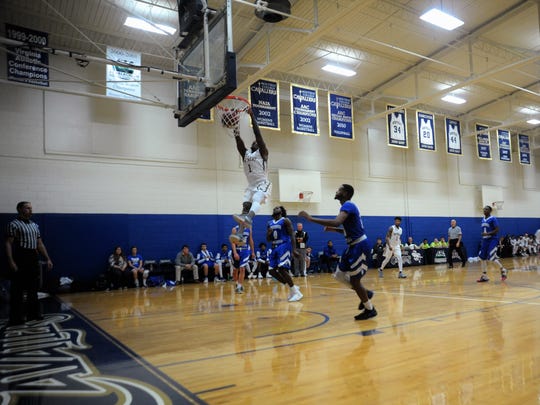 "I know the guys were really excited to play at home in front of the fans, and I think that helped motivate them to come out and perform at a high level," he said. "It was exciting to see everyone come out and for our guys to live up to our side of the deal and play a game that was fun to watch."

With its best start - and likely its highest NAIA ranking - ever, Montreat men's basketball is in the midst of a historic season.

The Cavs started 2018 with a road win over AAC opponent Milligan College, coached by former Montreat head coach Bill Robinson, who recorded four 20-win seasons when he was with the team.

It was the first time Montreat defeated Milligan at home in a decade.

"I have so much respect for Coach Robinson," Jones said. "I'm so thankful for the standard that he set for this program during his time here. Our program is where it is today because of guys like him."

Led offensively by junior Alonzo Mobley, whose 15.5 points per game are tops on a roster that includes four other players with scoring averages in the double digits, the Cavs will play nine of their final regular season contests against conference opponents.

"It's really a one-game-at-a-time approach and understanding that we are winning some games and there could be adversity arising at any point," Jones said. "Whether we're winning games or coming off a loss, we have to keep responding in a positive way. I think the guys understand that."

Following its most recent win, Montreat plays three straight games on the road: Jan. 13 at Reinhardt University, Jan. 16 at Allen University and Jan. 18 at St. Andrews (results not available as of deadline).

"I want the guys to embrace the challenge of playing on the road," Jones said. "The same (as) we're excited about playing at home in front of our fans, we have to be equally excited about the challenge of going in someone else's gym and playing good teams with fans rooting against us. I think for competitive guys it can be a more exciting environment."

The team returns to Montreat on Jan. 20 to take on Truett-McConnell College, which the Cavs beat 92-65 in November. It's the first of seven homes games for Montreat in the final 10 games of the season, including a Jan. 24 game against Union, ranked 24 last week.

"The season has been exciting for us, and I want our guys to enjoy it but also understand what's in front of us," Jones said. "It's a fine line between enjoying where we are right now but also looking forward and understanding what we need to do to continue to play well."

The Montreat College Cavaliers will play their next three games at home in the McCalister Gym. Tickets are $5.