Sidney Gibbs certainly looks stronger than he did in 2015 when as a sophomore he racked up 1,750 rushing yards for the Owen Warhorses In the 19 months since Gibbs played his last game his bulging biceps and ripped physique suggest he’s gotten bigger.

Sidney, left, and Saevion Gibbs will attend Christ School in the fall and plan to play football for the Greenies.(Photo: Fred McCormick)

Sidney Gibbs certainly looks stronger than he did in 2015 when as a sophomore he racked up 1,750 rushing yards for the Owen Warhorses.

In the 19 months since Gibbs played his last game, his bulging biceps and ripped physique suggest he’s gotten bigger. But those who know him best know he's had the weight of the world taken off his shoulders.

In March, Gibbs and his younger brother Saevion decided they would attend Christ School this fall to play football for the Greenies. Sidney plans to reclassify as a junior, giving him back the season he lost to a knee injury he suffered during a 7-on-7 scrimmage prior to his junior year at Owen.

“I was devastated,” Sidney says looking down at the ground during an interview June 20 at Cragmont Park.

“He was more than devastated,” his grandmother, Nancy Poole, said. “That word doesn't really do it justice.”

Sidney burst onto the football scene as a sophomore for the Warhorses. He was enjoying the kind of success that few people his age do in a sport as tough as football. He averaged 175 yards per game in 10 contests for Owen and scored 19 touchdowns. His junior season figured to be even brighter, and Saevion, a powerful offensive and defensive lineman, was likely to earn a spot on the team as freshman.

Then came Sidney’s injury, which forced him to miss the entire 2016 season. While Sidney watched from the sidelines, often quietly struggling to cope with not getting to play, Saevion played well as a freshman on offense and defense.

Saevion recorded 34 tackles while playing on the defensive line, often pushing the opponent’s interior line into the backfield. On the offensive side of the ball he provided running lanes for Owen ball carriers. That success as a freshman provided Saevion with a boost of confidence.

“It helped me realize I can do anything I put my mind to,” he said. “If I want to be good at something, like be dominant on the field, I can do it as long as I focus on doing it.”

Sidney was proud of his younger brother, often providing support and encouragement from the sideline. But inside he couldn’t stop thinking about the season that could have been. 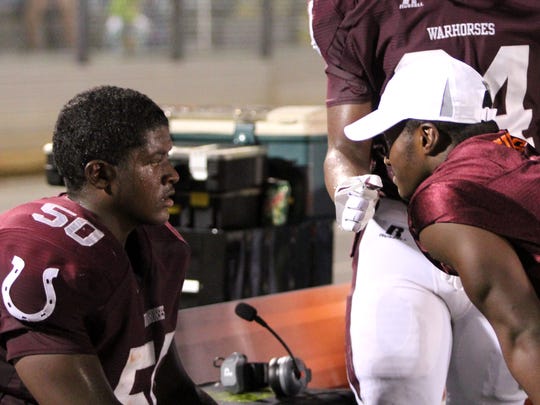 “Football is all I’ve known basically my whole life,” he said. “(The injury) really felt like a dream every time I woke up. And I just kept thinking ‘when is this dream going to end?’”

Sidney passed the time away from football by watching football, specifically videos from his sophomore season when his speedy, physical running style helped him eclipse the 100-yard mark in eight of 10 games and struck fear in his opponents' hearts. He rushed for more than 200 yards four times, including a 288-yard effort on the road against Avery High School.

Against Enka High School, in his first varsity football game for Owen High, Sidney Gibbs rushed for 229 yards and three touchdowns. That season he would rush for 1,750 yards and 19 touchdowns. (Photo: Fred McCormick)

However, Sidney wasn't watching to relive his glory days on the field. He was studying his own performance to see how he could improve. In that way, he was never really away from football.

"You don't have to encourage him a lot. He will work on his own," Poole said. "I think he could taste (football), if that's possible. Him and his brother can. It's just been ingrained in them."

Poole plays a vital role in keeping Sidney and Saevion in shape. During the interview at Cragmont Park, they pointed to her in unison and smiled when asked who keeps them focused on staying in peak physical shape. It's their grandmother.

And as a result, "I'm in the best shape of my life," Sidney said.

As Sidney and Saevion continued to focus on one day playing NCAA Division I college football and in the National Football League, that lost junior season continues to haunt Sidney. In January, he began seriously considering getting that season back by playing for a private school.

"I really didn't know what to do," he said. "One day I happened to see Christ School pop up on my phone while I was online, and it occurred to me that it's one of the only private schools around here with a football team and (enrolling) could allow me to reclassify for my junior season. Just the thought of that almost sounded too good to be true."

Malik gave him the number for the school's football coach, Mark Moroz. "Once I talked to (Moroz), we scheduled a visit, and that was great," Gibbs said.

Sidney and Saevion concluded that attending Christ School would give them the best opportunity to pursue their dreams in the sport they love. The rest of their family, according to Poole, sees an even bigger opportunity for the brothers.

"We were thinking more about what Christ School can do for them all around," she said. "Not just football, but academically. We all this as a tremendous opportunity. We're exceedingly proud that they've earned this opportunity."

Maybe even more importantly, Sidney has that lost season back. "He's so excited," his grandmother said.

Sidney and Saevion will be playing for a team that went a combined 20-5 in 2015 and 2016. Both seasons it finished as the N.C. Independent Schools Athletic Association Division II state runner-up. Under Moroz, who took over the program in the 2011 season, the Greenies have played in three state championship games and appeared in the semi-final round twice.

"Making this decision was tough," Sidney said. "When I knew I made the right decision (to transfer) I was thinking 'I have to do what's best for me and achieving my goals.' And this is the best decision."