In the pantheon of great Owen High School running backs you will find Shawn Gibbs near the top.

In the pantheon of great Owen High School running backs, you'll find Shawn Gibbs' name near the top. The 1993 graduate left the school as its all-time leading rusher before playing four years North Carolina Central University, where he led the Eagles in rushing as a junior and senior.

When Gibbs' playing career concluded, his coaching career began. On April 29, six year after becoming running backs coach at North Carolina A&T State University, he's achieved one of his biggest accomplishments - the Chicago Bears selected Tarik Cohen in the fourth round of the 2017 NFL Draft.

Cohen, who despite being a diminutive 5-foot-6 and 179 pounds eclipsed the 1,000-yard rushing mark each of four season he played for the Aggies, was the first player the NFL selected from N.C. A&T in over a decade (the Green Bay Packers selected Junius Coston in the fifth round in 2005). Cohen was the first running back drafted out of the school since 1984, when Mike Jones was selected in the 12th round by the Minnesota Vikings (the league shortened the draft to eight rounds in 1993 before settling on its current seven-round format the following year).

Under Gibbs' guidance, Cohen had the most prolific career of any running back not only in the college's 116-year-old football program but also in the Mid-Eastern Athletic Conference, home to 13 historically black colleges and universities. He rushed for 5,619 yards and scored 59 touchdowns.

N.C. A&T was the only college to offer the player a scholarship coming out of high school, Gibbs said in a recent interview. Cohen made the most of the opportunity. He was recognized as the MEAC's Freshman of the Year following his first season and the Player of the Year each year after that. He was also named first-team All-American by the NCAA following his senior season.

Viral videos of Cohen doing backflips while catching, sometimes as many as two footballs at a time, drew national attention to N.C. A&T.

Cohen is the first player Gibbs has coached to be drafted into the NFL.

“I was so happy for him, because he deserved it so much,” Gibbs said. "I’ve been there throughout his journey, and I’ve personally witnessed how hard he worked and how much he wanted it. I immediately appreciated how much this would change his life for the better.” 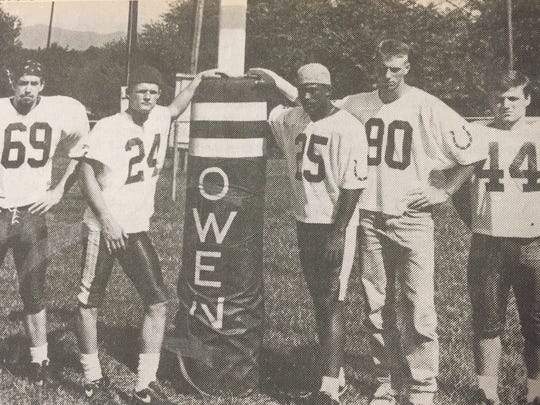 In this photo from the Sept. 24, 1992 Black Mountain News, Shawn Gibbs (25) is one of five Owen High players of the week, selected for rushing more than 100 yards (for the third straight week) during a 12-1 season for the Warhorses. (Photo: Black Mountain News)

Gibbs has deep football history in his family. His nephew is Sidney Gibbs, a junior at Owen High School who rushed for 1,750 yards and 19 touchdowns as a sophomore before missing his junior season with a knee injury. Shawn's father and Sidney's grandfather Stan played running back for N.C. Central before becoming a coach and player for the Asheville Bears semi-professional football team (later named the Grizzlies). Struggling to field enough players, the Grizzlies suspended its season last year after playing six of 10 games.

Gibbs, who helped organize a draft party for Cohen on the N.C. A&T campus, almost missed the moment.

“I was supposed to be there to watch with Tarik, but I later remembered I already had an obligation to attend a wedding,” Gibbs said. “I had just taken a shower at the hotel and as soon as I walked out it happened to be the Bears’ pick. It was perfect timing.”

Cohen's combination raw athleticism and creativity as a runner caught Gibb's eye in practice during the running back’s freshman season.

"We were doing inside runs, and he got the ball with nowhere to go,” Gibbs recalled recalled Cohen making it past the line of scrimmage before he was alongside the team's offensive tackle, engaged in a block with a linebacker. "Tarik ran between those two guys, under their arms, while they were engaged. Nobody even realized what he did. He just disappeared and popped out on the other side. We had to keep rewinding it on tape to even believe it.”

Cohen may be the first player coached by Gibbs to be drafted, but he won’t be the first of the former Warhorse great’s players to suit up in the NFL. At N.C. Central, the first of his three career college coaching jobs on the staff of head coach Rod Broadway, Gibbs coached Greg Pruitt Jr., who signed with the Baltimore Ravens as an undrafted free agent in 2007 after becoming the N.C. Central Eagles' all-time leading rusher (3,008 career rushing yards from 2004-06; Gibbs is the school’s 11th all-time rusher.

Frank Warren, who played for Gibbs when he coached under Broadway at Grambling State University from 2007-10, signed with the Dallas Cowboys after finishing his career in Grambling, Louisiana as the Tigers’ all-time leading rusher.

“The philosophy that Coach Broadway has allows running backs to be successful,” Gibbs said. “Once you get the guys to buy into that we can be successful, and we’ve had success. We tell our recruits we’ve had the player of the year (in the MEAC) four of the past six years and they’ve all been running backs.”