If anyone is a going to break a basketball record at Warren Wilson College then Danasia Dumas is a prime candidate.

If anyone is going to break a basketball record at Warren Wilson College, it's Danasia Dumas. The 5-foot-4 sophomore from Mount Gilead scored 645 points in 29 games last season on her way to first-team All-American honors in the United States Collegiate Athletic Association.

The athletic guard is continuing to showcase her scoring ability this year, putting up nearly a point per game more than she averaged a season ago. Slightly more than a dozen games into the 2016-17 season, Dumas is poised to become the first player in the program’s history to score 1,000 career points as a sophomore.

The Owls hosted Johnson University on Jan. 10 and Dumas, known affectionately by her friends and family as “Piggy,” came into the game the second-leading scorer in the USCAA and only eight points shy of 1,000. With the hand of a Johnson University Royals defender in her face, Dumas did what she has done at a faster rate than any other player in Warren Wilson women's basketball - elevated and drained the jump shot.

"It felt great," Dumas said of accomplishing a goal she had coming out of high school. "I just don't know if I expected to do it so early in my career."

Danasia Dumas is joined by her parents, Garrett Dumas and Natasha Thomas, as well as her coach, Robin Davis, as she's honored on the court immediately after scoring her 1,000th career point on Jan. 10. (Photo: Fred McCormick)

In fact, nobody has scored as many points as quickly in the history of women's basketball at the school. By the time Dumas is done, she could leave behind some pretty amazing numbers, head coach Robin Davis believes.

"She will put her stamp on this program," Davis said. "The records she sets here, points scored and anything like that, will never be broken, in my mind. I just don't see it."

Players with the scoring ability of Dumas are few and far between. Danasia Dumas puts up a shot from the three-point range at home against Johnson University. (Photo: Fred McCormick)

"She's the type of player that only comes around every so often," Davis said. "I don't think that anyone ever thought Warren Wilson College would have a basketball player who would score her 1,000th point as a sophomore."

Basketball has always played a major role in the life of Dumas, who averaged more than 20 points per game for West Montgomery High School (Mount Gilead) as senior. Dumas led the Warriors to a 22-1 record in 2014-15, beating Mitchell County High School 67-19 in the opening round of the state playoffs.

The small-town feel of her current school reminds her a lot of the time she spent playing for her 1-A high school.

"I feel at home here in this program," she said. "Even though I'm playing college ball I feel like I'm back at home playing in high school." 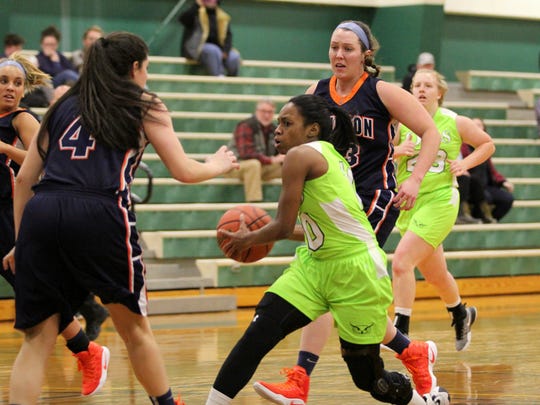 Danasia Dumas drives to the basket against Johnson University after scoring her 1,000th career point in a win for the Owls. (Photo: Fred McCormick)

Things could've been much different for Dumas coming out of high school, when she was recruited by both Warren Wilson and NCAA Division III program Averett University in Danville, Virginia.

"Actually she decided to sign with them," Davis recalled of her attempts to bring Dumas to Swannanoa. "She called a couple of months later, and the financial aid offered by Warren Wilson just worked better for her so she switched."

Davis knew she was getting a talented player for her program, but she had no idea what a prolific scorer Dumas would turn out to be for her team.

"She can do it all," Davis said. "She's not just one thing. She can do everything on the court and do it all consistently."

But Dumas owes her to success on the court to much more than her ability to knock down contested three-pointers and score despite contact, according to Davis.

"You're not going to outwork her," Davis said. "She works so hard in practice and at games. She gives the same effort no matter what, which makes her a great leader."

That effort is driven by Dumas' desire to prove herself as worthy to the programs that passed on her coming out of high school.

"I've spent late nights working out with my uncle, late nights in the gym working when it's cold outside," she said. "I want to show the bigger schools that didn't take me what they missed out on."

So far what Dumas has shown is the ability to score almost at will. Scoring her 1,000th point as a sophomore doesn't mean she's accomplished everything she has set out to do on the basketball court, however.

"Making it to the national championship tournament is the main thing," she said. "And hopefully we can get there and upset a few people and win a championship."