The Owen Warhorses opened the season with a 75-73 win over 3-A North Henderson at home on Nov. 15, avenging a 90-point loss to the Knights just a year ago.

Kendal Marlowe led the Warlassies with 25 points in the season opener against North Henderson.(Photo: Fred McCormick)

The Owen Warhorses opened the season with a 75-73 win over 3-A North Henderson at home on Nov. 15, avenging a 90-point loss to the Knights just a year ago.

The Warhorse win was preceded by a Warlassies win, fueled by a 25-point offensive explosion by guard Kendal Marlowe.

A large crowd filled the gym at Owen, where Marlowe scored her career high, shooting 9 for 16 from the field. Sophomore Chesney Gardner added 11 points and 13 rebounds of her own.

Eight of Gardner's rebounds came on the offensive side of the floor. She also added a three-pointer, two assists and a steal to her stat line.

Marlowe dished out 4 assists, behind only junior Ashley Valencia, who had 5 assists and 7 points coming off the bench. Junior Caitlyn Ledford was 3 for 6 from three-point range, netting 9 points against North Henderson.

Senior Mathew Brown scored a career-high 33 points while pulling down 14 rebounds in the opener. 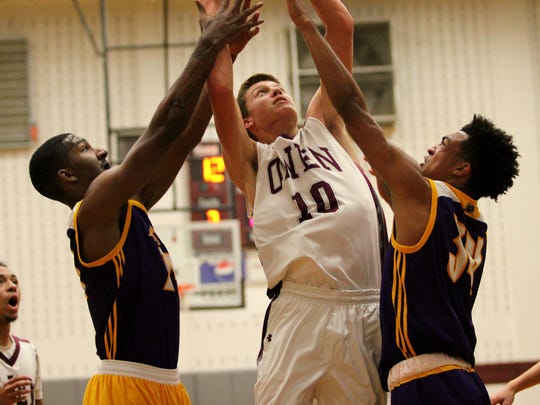 "Mathew stepped up," head coach Chuck Robinson said of the center's performance. "He worked hard in the off-season. He's gotten stronger, gotten more physical, and his shooting has gotten better. All of that showed Tuesday night."

Robinson knew early on against the Knights that Brown would be a factor in the outcome of the game.

"They couldn't stop him inside," Robinson said. "During the first timeout, I told the boys as long as they can't stop our inside game then we're going to get it to Mathew as much as we can and play inside-out."

Brown's fellow senior, Brian Bartlett, added 23 points and 13 rebounds. It was his first game playing in the frontcourt, having moved there from the guard position.

Owen's energy on defense was the difference between this year and last year, according to Robinson.

"Like I said before, we're going to press every time the other team scores," he said of his team's aggressive approach on the defensive end. "We also kept our turnovers down and did a good job of sharing the ball."

Ben Craig added 12 points, even if Robinson said the junior guard had an off night.

"I told him after that game, one thing you can't do is quit shooting," the coach said. "You're going to have nights where shots don't fall, and he still had 12 points and 6 assists."

Craig followed the advice of his coach in a 75-69 road win against rival Reynolds on Nov. 17, when he led the team with 27 points. The victory avenged a 79-71 loss to the Rockets suffered by the Warhorses a year ago. The Warhorses improved to 2-0 on the season.

"It was a huge win," Robinson said. "The boys are starting to see all of the hard work they put in over the offseason pay off."

The Warlassies dominated their game against Reynolds, holding the Rockets to 6 points in the third quarter. The 59-38 win was highlighted by a 27-point outburst from Gardner.

Both teams host the Asheville Trailblazers on Tuesday, Nov. 22 (results not available as of deadline) before hosting Enka on Nov. 30, when the 90-win Warlassies of the 1960s will be honored between varsity games.