Brighter days on the horizon for Owen football

The Owen High School varsity football team has struggled under head coach Nathan Padgett, going 2-18 in his first two seasons on the job.

Brighter days on the horizon for Owen football

The Owen High School varsity football team has struggled under head coach Nathan Padgett, going 2-18 in his first two seasons on the job. While fans of the program hope for better days ahead, those with knowledge of football in the Swannanoa Valley know just how bright the future could be for the Warhorses.

Two teams provide a clear view of the future of the varsity football program. One is the junior varsity team at the high school, and the other is the recent Super Bowl champion Midget division team of the Warhorse Youth Football and Cheer organization.

The junior varsity team is fresh off of a 6-4 season. A 0-2 start gave way to a four-game winning streak and a big win, according to second-year head coach Clint McElrath.

“We beat Reynolds for the first time in 12 years,” he said.

McElrath’s squad excelled in some important areas during the season, according to the coach.

“They played with character on the field,” he said. “They had a strong work ethic and allowed themselves to be coachable.”

McElrath, an Owen graduate,  coached the junior varsity team at Pisgah High School for four years before coming to Owen, where Padgett asked him to take on the same role.

The junior varsity coach has the task of getting players ready to play for Padgett’s varsity team.

“The boys do the same drills, receive the same coaching and run the same offense and defense, and special teams that the varsity players do,” Padgett said.

The junior varsity Warhorses were 1-9 in 2015, but players such as sophomore quarterback Auden Myers, who has started for McElrath each of the past two seasons, played key roles in this year’s turnaround.

Preventing turnovers on the offensive side of the ball was a strength for the junior varsity team this year, and takeaways on defense provided extra possessions, according to McElrath.

One sophomore who was not on McElrath’s roster was Kendrick Weaver, who threw for over 1,000 for the varsity team. The young quarterback was the team’s second-leading rusher with 230 yards and accounted for 14 of the Warhorses’ touchdowns through the air and on the ground.

The best football season in the Swannanoa Valley was enjoyed by the Warhorse Midgets, which didn't lose a game in 2016. That roster of 12- and 13-year-old players will start to make its way to the high school level in the next couple of years.

Players like Jack Jones, who was named the MVP following the Warhorses' Super Bowl win over Enka on Nov. 6, have a lot of potential, according to the team's head coach Matt Cook. Running back Myles Tate is among the crop of talented players too. 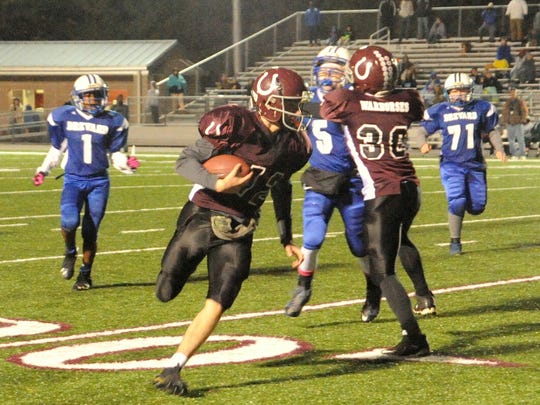 The undefeated Midget Warhorses' quarterback, Jack Jones, will be one of the players to watch out for in the years to come. (Photo: Bria Crompton)

"These boys are ready to play at the next level," Cook said.

Each school year students in the Buncombe County School system are required to complete a senior project before graduation. Over the past three school years The Black Mountain News has published work by four of those students. This year senior Bria Crompton spent weeks balancing school, volleyball and basketbal to learn what the future holds for the varsity football program at Owen High School. Bria photographed varsity, junior varsity and youth league football in the Swannanoa Valley and talked to coaches and players from several of those teams. Her work culminated in the story above.