The Warlassies are ready to run

Entering the new season, there's little difference between Owen High's varsity girls basketball team this year and the one last year that won its opening playoff game and advanced to the second round.

The Warlassies are ready to run 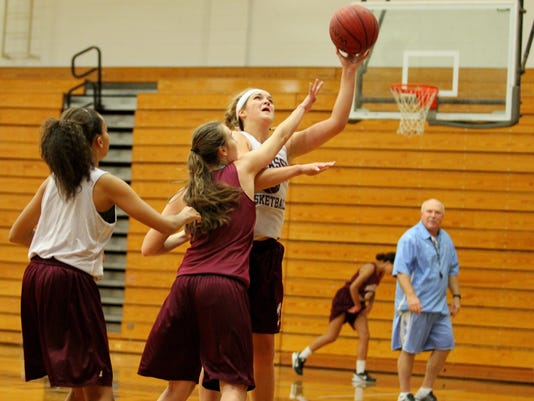 Owen sophomore center Chesney Gardner takes the ball up over a defender as the Warlassies prepare for the 2016-17 season.(Photo: Picasa / Fred McCormick)

Entering the new season, there's little difference between Owen High's varsity girls basketball team this year and the one last year that won its opening playoff game and advanced to the second round.

The Warlassies kick off the new season Nov. 15 with almost the entire team intact, having lost only two seniors to graduation. Which could mean an even better season this year.

Head coach Tim Raines, entering his 23rd season as head coach, believes this season's team could be one of the best he's coached. But it won't have an easy time, he said, despite returning four starters from a team that won 19 games last year.

"I told the girls we won't be sneaking up on anybody this year because, when you win 19 games, teams will be ready for you," he said. "With that being said, this team has the potential to win 20-plus games."

The high water mark for a Warlassies team coached by Raines is 22 wins, achieved more than a decade ago. This year's talent makes him optimistic about the upcoming season.

"If we come ready to play every night and things fall into place, I can see this team winning that many games," he said.

Sophomore center Chesney Gardner will look to improve on her freshman season, one in which she led the team in scoring with 15.9 points per game. Gardner also pulled down 9.5 rebounds per game and earned a spot on the All-WNC second team.

"She was in an enviable spot last year," Raines said. "She had no pressure at all coming in as a freshman. Now after scoring almost 500 points as a freshman, there are some expectations and how she handles those expectations will say a lot about her as a player."

Gardner feels a little more pressure coming into the season, but not more than she can handle, she said.

"I want to be as good as I was last year, at least," she said. "I feel like I learned a lot last year, so I have a better understanding of what things are like and I'm not just thrown into this varsity basketball thing."

Last year also provided an opportunity to develop chemistry with her teammates.

"I feel like we'll be stronger this year," she said. "We were able to keep our core group together."

One challenge for the Warlassies will be to find a way to replace the offensive production of junior Dee Graves, the team's second-leading scorer last year who suffered a knee injury that will keep her out until December at least. One of the players expected to help fill that void is senior Kristyl Keeter, according to Raines.

"Krystal is the type of player that can explode for points," he said. "She's quick as a cat. She's smart and she's physical."

The team will also need someone to fill the void created by the graduation of last year's leading three-point shooter, Taylor Lovci. Junior Caitlyn Ledford will have the opportunity to do that.

"Caitlyn is a very good three-point shooter," Raines said. "If she gets her feet set and her shoulders square, she can be deadly from out there. She's also athletic enough to be a big help for us defensively."

Just like last season, Raines will rely on a deep rotation of athletic perimeter players to disrupt opponents on the defensive end. If his players put it all together on the court, they could be playing basketball through the end of February.

"I was very proud of how these girls played last year with our lack of size and experience," he said. "But this year, if we take care of business in the regular season, I think we can make a run in the playoffs."