Bike the quarry after rocking it

Bike the quarry after rocking it 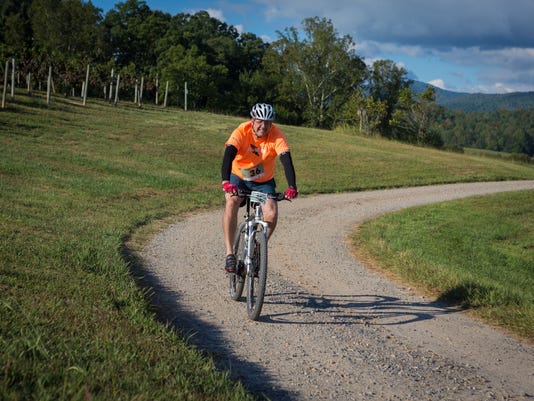 Climb the Quarry will take cyclists five miles uphill on gravel after Rock the Quarry on Saturday, Sept. 17.(Photo: SPECIAL TO BMN/Paul Jackson)

There are a few things runners can do after they finish running the Saturday, Sept. 17 Rock the Quarry 5K. They can cool down under the pavilion and hear about the organizations the annual race benefits, watch the top finishers from each age group receive a trophy and now they can grab a bike and head back out to the gravel.

The last option is available thanks to the Climb the Quarry time trial, which will take place on roughly the same course as the foot race that proceeds it.

The 5-mile uphill climb is the sixth and final race of the 2016 Lung Buster Time Trial Series, which up until now has consisted of a much different kind of cycling, according to Daphne Kirkwood of iDaph Events.

"This is the first gravel event we have put on in the series," she said. "The other five have all been road time trials."

Kirkwood's company will be doing the timing for Rock the Quarry and on her first visit to the site of the 5K she was convinced it would be an ideal setting for a cycling event.

"With the quarry already being closed down for that event I thought it would be a great place for this," she said. "This will allow runners and bikers to both have an activity that day."

And some will have an opportunity to do both, according to Kirkwood.

Cyclists will be started every minute for the Climb the Quarry time trial, which will follow the Rock the Quarry 5K on Saturday, Sept. 17. (Photo: SPECIAL TO BMN/Paul Jackson)

"We have challenged people to do both the run and the biking," she said. "The time trial starts at 11:30 a.m. so the 5K will be done and people can stick around and do the bike ride as well so they can double up."

The route for Climb the Quarry will start on flat terrain before riders begin to make their ascent into the quarry, where the time trials will finish. Riders will leave in 1-minute intervals.

"Time trials are unique because you're racing against the clock instead of other people in a race," Kirkwood said. "We start everyone one minute apart so you're basically racing against yourself typically trying to either catch up to the person in front of you or not get caught by the person behind you."

The event will attempt to capitalize on the continued growth of Rock the Quarry, which is expected to draw 350-400 runners this year, according to Jon Neumann, the longtime director of the race.

"I think the race continues to grow because the course is so scenic," he said. "And the word has finally gotten out."

Proceeds raised from Rock the Quarry benefit the Black Mountain Home for Children and the Asheville Museum of Science (formerly Colburn Earth Science Museum). The event has raised over $61,000 for the neighboring home and $19,000 for the museum in the last three years. Neumann credits the sponsors of the race that have come on board the last few years.

"In the early years of Rock the Quarry, we weren’t able to raise much money because races are expensive to put on and we were relying on registration fees to raise the money," he said. "A couple years ago we changed our philosophy on how we raised money for the race and we started asking our very important vendors and customers if they’d pitch in to help our nonprofit partners and the response was unbelievable.

"Carolina Cat is our presenting sponsor this year and Michelin, James River Equipment, Colony Tire and Camp Rockmont are our Platinum Level sponsors. After that, we have 30 more sponsors that have all pitched in."

Want to walk or bike the quarry?

Registration for both events remains open until the day of the race. The Rock the Quarry 5K begins at 9:30 a.m. with Climb the Quarry starting at 11:30 a.m.

Registration in advance can be done online at racesonline.com for the 5K and idaph.net for the time trial.