Warhorses tie is as good as a win

Warhorses tie is as good as a win 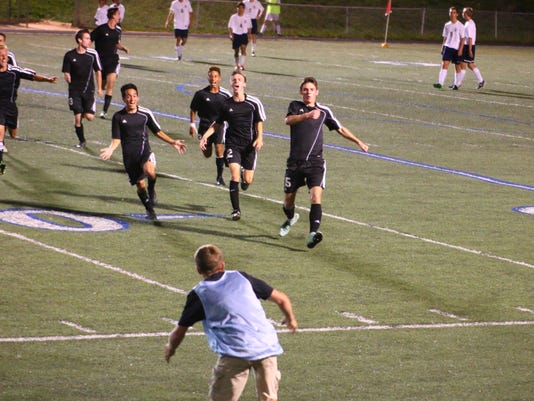 The Owen Warhorses celebrate after scoring the tying goal against T.C. Roberson in double overtime.(Photo: SPECIAL TO BMN/Boris Gun)

The Owen Warhorses traveled to Asheville on Aug. 29 and came back to the Swannanoa Valley with a 1-1 draw against nationally ranked T.C. Roberson.

The match is an example of one of the few times that a tie is as good as a win, according to head coach David Fiest.

"T.C. (Roberson) was ranked fourth in the nation out of all 4-A school on MaxPreps going into the game," he said. "They were either first or second in the state, so this was big for our program."

The Warhorses played the Rams to a 0-0 tie through regulation, and Roberson scored early in the first overtime period. That goal led to an adjustment for Fiest and his team.

"We made an adjustment and pushed another attacker up," Fiest said. "We moved senior Matt Coward forward and loaded the attack."

Roberson packed in defenders to try to keep Owen off of the board, but the move by Fiest paid off for the Warhorses when Coward drilled a goal from around 25 yards

"We took a direct kick from deep in our own half that went out of bounds and they threw the ball in," Fiest said. "We won the header and Matt happened to get on the end of it volleyed it in with 2.7 seconds left."

The Warhorses had major contributions from many players, but Fiest pointed to his goalkeeper, senior James Murray, as a major key in the match.

"James put on a spectacular display of goalkeeping," Fiest said. "It was really some of the best goalkeeping I've seen as a coach. It was ridiculous."

Fiest said the draw against Roberson is an example of what his team needs to do to establish itself as a force in the region.

"Games like this are the kind we need to put us on the map," Fiest said. "We need to continue to go out there and play against good teams the way we did in that game."

The Warhorses followed up the match against Roberson with a 2-1 home victory against Thomas Jefferson, but Fiest and his team are unlikely to forget their contest against the Rams anytime soon.

"I've been part of a lot of games as a player," Fiest said. "I've been in some pretty high stakes games as a coach and that was definitely one of the top 5 games I've ever been a part of as a coach."