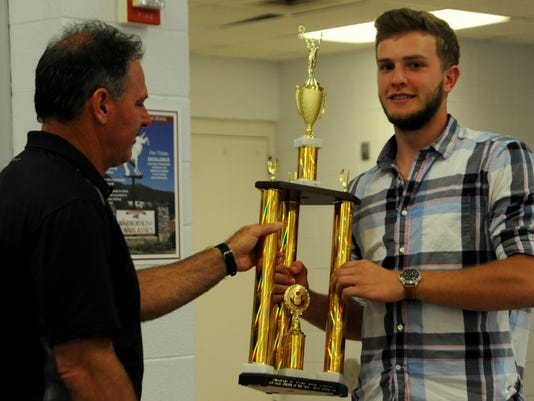 Owen athletic director Anthony Lee (left) said that Brady Parker is “one of the greatest people” he has met.(Photo: Fred McCormick)

Last basketball season, opponents struggled to stop Owen High junior Brian Bartlett. The guard led the Warhorses in scoring with more than 15 points per game. Stopping him on the baseball diamond was no easy feat either.

On May 18, Owen coaches recognized Bartlett’s athletic accomplishments by naming him the overall athlete of the year.

“He’s very well-rounded,” Lee said. “He played a little bit of everything, and everything he does he does a great job at it. I can’t wait to see what all he’s going to accomplish. I truly believe he’s an athlete that can play at the next level.”

Earning male athlete of the year honors was Bartlett’s teammate on the basketball court and baseball diamond, senior Brady Parker. The 6-foot-2 forward started 24 games for the Owen basketball team, averaging 4.5 points per game and averaging about four rebounds per contest. But baseball season was when he really excelled.

An emotional Lee praised both Parker’s achievements and character.

“He’s had many accomplishments at Owen High School,” Lee said. “I could say all kinds of things about him athletically, but he’s got to be one of the greatest people I’ve met.”

For the second consecutive year, the Owen female athlete of the year award went to a freshman. Chesney Gardner, a crucial member of the Warlassie volleyball, basketball and track and field teams, earned the award 12 months after now-sophomore Ashley Valencia took it home.

Gardner led the 19-10 basketball team with nearly 16 points and 9.5 rebounds per game. But finishing among the top 15 of Western North Carolina high schools in scoring may not have been her biggest accomplishment.

Bartlett’s overall athlete of the year award is the premiere athletic award at the school.

He boasted the baseball team’s second-highest batting average (.347) among players with at least 60 plate appearances. He led the team in doubles (8) and triples (2) while driving in 10 runs. His nine stolen bases also tied him for second place on the Warhorses.

“You could take him and put him at any position on anybody’s baseball team,” Lee said. “He’s a tremendous baseball player. I just love the way he gets after it and gets dirty playing the game the right way.”

In addition to leading the basketball team in scoring, Bartlett was also second in rebounds (8.3) and steals (1.4) per game.

“The award recognizes teachers at Owen who make a significant difference in the lives of students,” Lee said. “The seniors voted for the teacher that they felt had done the most for them. (Slaughter) works harder than any person at Owen High School for the athletes at the school.”