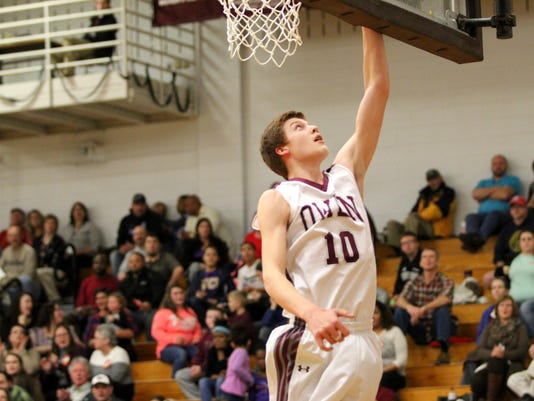 Warhorse center Mathew Brown has been a big contributor to Owen’s success this season. The junior has recorded eight double-doubles this season, including a 14-point, 19-rebound effort against Polk in the final game of the regular season.(Photo: Fred McCormick)

Everyone who knows the sport knows that basketball is a game of runs. Games are frequently decided by which team gets hot at just the right time.

Seasons are also often determined by who builds momentum during the second half of the season, and this fact bodes well for the Owen Warhorses.

The Warhorses finished the regular season last week with a 68-61 road win over Polk. The victory was an impressive feat for Owen, who beat the Wolverines three times this year. But more importantly the victory gave the Warhorses their sixth consecutive win going into the Western Highlands Conference tournament next week.

The total wins for the team (14) have already eclipsed head coach Chuck Robinson’s previous high mark of 12 in a season.

“If we win a couple more it will be the most we’ve had since a little ways back,” he said.

The Warhorses finished the season with a victory against every conference opponent with the exception of Avery, one of the top 1A teams in the state. Their performance was good enough to give them at least a share of second place overall in the competitive WHC. The were also the conference’s top 2A team.

“They’ve exceeded any and all of my expectations going into this season,” Robinson said. “They are playing great as a team. They’re still practicing hard and they’re still very focused even though we’re late in the season.”

Owen’s finish near the top of the conference puts them in position to host an opening round game in the conference tournament, a three-day event that begins on Monday, Feb. 15.

When the tournament opens Robinson will continue to rely on heavy contributions from his young players, most of which will be returning to the team next year. Among the talented young core is sophomore Ben Craig, who is scoring around 14 points each contest, while averaging approximately five assists and rebounds each game as well.

His aggressive style of play and calm demeanor have made the young guard an unquestioned leader.

“He has really stepped it up as a sophomore,” Robinson said. “I have put him in a situation as a point guard. Ben is really more of a two guard, but he has accepted that role as point guard and has done an exceptional job at that. He’s really getting better each game.”

Craig and the Warhorses were put to the test in their final regular season home game of the season by Hendersonville, who pushed Owen into overtime for the first time this season.

Craig responded with 19 points, eight rebounds, six assists and two steals. His teammate in the backcourt, Brian Bartlett, continued to be the Warhorses’ primary scoring threat.

Bartlett scored a season-high 27 points against Hendersonville as the Warhorses held on to win by three.

The team’s other emerging star is center Mathew Brown, who was named the Ingles Player of the Week last week by The Asheville Citizen-Times. The junior’s numbers have put him at the top of the WHC in rebounds and blocked shots.

He is also leading the conference in double-doubles after picking up his eighth of the season with an incredible 14 points and 19 rebounds to close out the regular season in a thrilling double-overtime win against Polk.

But Robinson has been most impressed this season by the team’s collective performance on the floor.

“That’s the thing about this team, it’s the whole team, it’s all 12 kids,” he said. “The kids on the bench that don’t get as much playing time are right there supporting their teammates that are on the floor on any given night. It’s been great to see.”

That team atmosphere has created an environment that has the Warhorses believing that they can continue to exceed expectations as the postseason begins.

“We’re going into the tournament with a lot of confidence,” Robinson said. “Any time you can do that it gives you a better chance. I look forward to a great conference tournament.”