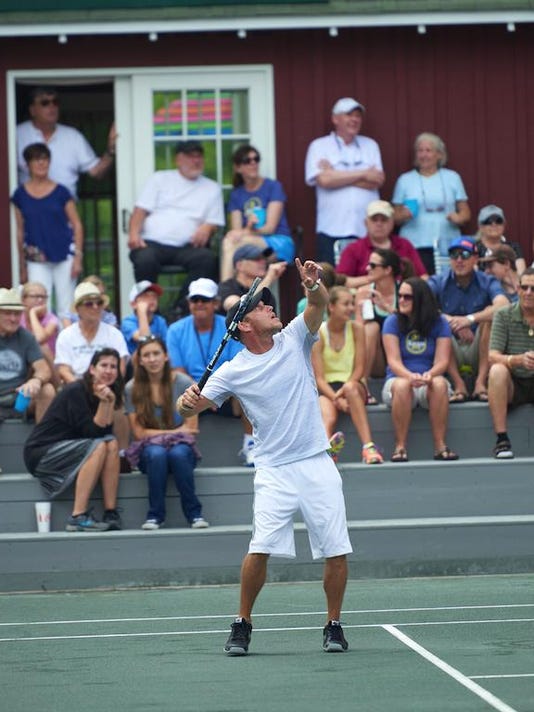 Tennis pro Bo Webb, new owner of Cheshire Racquet Club has been playing and competing in tennis since he was 15 years old.(Photo: Bo Webb/SPECIAL TO THE BLACK MOUINTAIN NEWS)

Take the passion for teaching the sport that you love and the knowledge that comes from years of playing said sport and you have Bo Webb.

The tennis pro and experienced business partner bought Cheshire Racquet Club located at 195 Dogwood Lane in Black Mountain in mid-2015. The past six months has given the club time to reorganize and begin to grow into the type business that Webb envisioned when he purchased it.

“The club has tennis loving members from age 4 years to 85,” Webb said. “I love teaching tennis regardless of the age.”

Webb moved his family to Richmond, VA when he was named head professional at Woodlake Swim and Racquet Club. His personal goals were met by becoming the director of tennis at the Brandermill Country Club.

He led a team of investors through the purchase and expansion of the largest outdoor tennis facility in Richmond while directing the development of a new four court indoor tennis complex. Now it is called Midlothian Tennis Club and has 26 courts.

Webb started playing tennis when he was 15 years old and became a skilled junior tennis player which led to a scholarship at Mars Hill College.

“I went to Enka High School and was pretty much a soccer star which put me in the position of a top recruit for college picks,” he said. “I went to Mars Hill College (now University) on a full scholarship and played soccer and tennis.”

He has played Ivan Besancon, the number 3 junior in France who played such greats as Andy Murray of Scotland and Novak Djokovic of Serbia.

Webb describes Lori, his wife, as being the “backbone of the business.” His 22 year old son, Kaleb, is supertintet at Ch eshire Racquet Club. The Webbs have two daughters, 15 year old Kira and 8 year old Kassidy. Both girls play tennis but aren’t passionate about it yet.

One of Webb’s goals for Cheshire Racquet Club is to increase membership which includes 131 members now, to add two more indoor courts.

“I think it is exciting that the club is hosting a USTA (United States Tennis Association) Tournament in April for adults and another one for juniors in May,” he said. “These are sanctioned by the USTA so when a player participates he earns points toward his ranking.”

“One of the best parts of the club for me is the USTA teams,” Decker said. “ I expect a strong spring USTA season with Cheshire Racquet Club hosting five different teams. I am captain of three men’s and women’s teams.”

Webb said this is the happiest time of his professional tennis career.

Webb wants the atmosphere of Cheshire Racquet Club to remain warm and friendly.

“A lot of people think of a racquet club as being an expensive country club, but that isn’t the case with us,” he said. “There isn’t the country club stigma at Cheshire Racquet Club, but rather a warm atmosphere where everyone helps everyone else. One of my goals is for Cheshire Racquet Club to grow into a place where future generations come to play tennis. All levels of tennis players are welcome at the club, and it will remain that way.”

“Bo is a gem,” Decker said. “His enthusiasm is demonstrated by his support of his members. He shows up at our matches and cheers us on. He holds clinics that keep us moving and learning. He and his family have taken the reins and brought organization and energy to the club’s membership.”