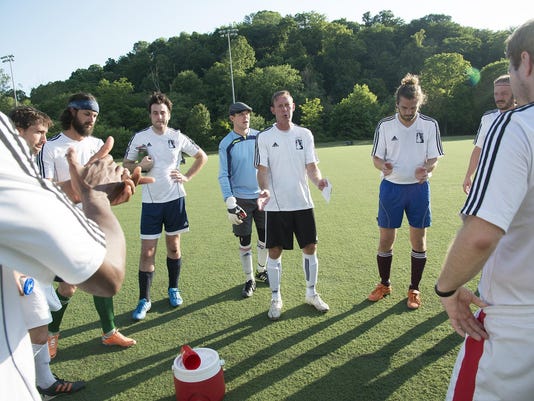 Down at the half after a couple of drives, Watershed Football Club captain Paul Shockley reviews strategy and rallies the players.(Photo: Photo by Paul Clark)

What a difference a couple of years can make. Two years ago, the first year the Watershed Football Club's Open 4th Division team fielded a team in the Asheville Buncombe Adult Soccer Association, it didn't win a game. This year, entering last weekend's division tournament, the Dark City Deli-sponsored team had not lost a match. 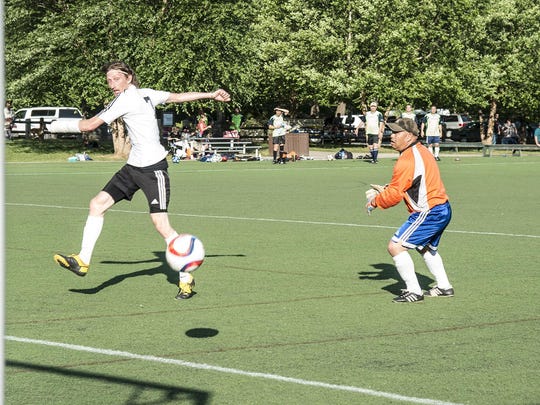 The club was the dominant in the 11-team division this season, going 8-0-2 while playing a stifling brand of defense. As far as the club's luck during the semi-finals tournament last weekend, well, that wasn't so good.

The team entered the tournament as the divisional number one seed, holding onto the top spot in the standings for all but one week this season. The overall turnaround of the team has been the result of a careful balancing act, according to Dark City captain Paul Shockley.

"The key is to try to hold on to your talent and the players that you think can take you forward and produce results," he said. "But you still have to keep in mind that it is a recreational league and everybody that plays pays their dues. You have to try to divide the playing time as equally as possible."

Shockley began playing soccer in middle school at Asheville Christian Academy. He went on to play for nearby Reynolds High School and spent a season on the Montreat College team. He grew to admire strategies that revolved around strong defense.

Shockley's approach to the game led to Dark City giving up only seven goals the entire regular season. The team finished with a scoring differential of 22 on its way to the regular season title.

"Our back line has been our secret weapon all season long," Shockley said. "That line has helped us with our strategy of wearing down the other team until we get an opportunity to score."

Dark City has relied heavily on the leadership of Whit Lammons, who functions as the de facto captain of the defense, according to Shockley. Lammons' presence on the team has been a key to the team's turnaround.

"Whit brings a sense of leadership, but he's also very humble," Shockley said. "He's the one that's calling plays as things happen, and he's giving guidance to the midfield and the rest of the defense."

Shockley describes the transformation that has taken place on the team over the last two seasons as a "beautiful evolution."

An opening round loss to the Oppenheimer Football Club in last weekend's championship tournament means that Dark City will have to wait another year for a shot at the league's double cup - a phrase used to describe winning both the regular season and postseason titles.

Oppenheimer went on to lose to Manchester Football Club in the championship match.

Ironically, it was an Oppenheimer win over Manchester, which finished in second place in the Open 4th, on May 17 that clinched the regular season title for Dark City.