Nov. 8 Letters to the editor

Letters to the editor

Nov. 8 Letters to the editor 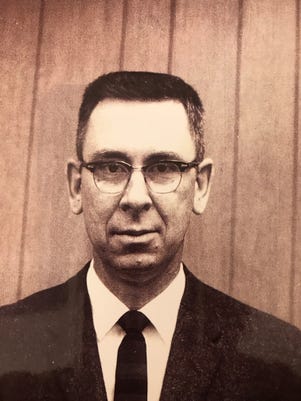 It was a very interesting article on the “Apron Lady” in the Oct. 25 paper and brought back many memories both good and bad. Back in the day every women had one or more of her aprons and they have been handed down thru the years so the memories live on.

The bad was when the article written by Fred McCormick wrote about McGraw closing the coffee shop, Dr. Sam Cooley opened his medical office. He failed to mention that in December of 1953 Dr. Cooley was joined by Dr. H Rankin Miller, who practiced there with Dr. Cooley until Cooley’s death in 1958.

Dr. Miller saw patients there until September 1965, when he closed his practice to join Olin Mathieson in Saltville, Virginia as their medical director. Dr Miller worked tirelessly for the people in Black Mountain and surrounding areas often getting up in the middle of the night to help a sick person or deliver a baby.

He traveled every morning to Mission and St Joseph’s hospital to see about his patients before opening his office for the day. He was assisted in his office by Faye Massey as his receptionist, A.J. Kerley, lab technician and Lillian Russell his nurse.

Dr. Miller was a graduate of University of VA with both a B.S. and M.D. degrees. Taking his internship in Kings County Hospital, Brooklyn, NY and residency at Martha Jefferson Hospital in Charlottesville, Virginia, he came to the valley in 1947 opening his office for general practice in the Buckner Building in Swannanoa. In WW II he served in the US Navy as lieutenant, senior grade and also served in the Korean Conflict.

Dr. Miller died July 29, 1970 from cancer and is buried in Brevard, NC. His 4 daughters 3 of which still live in WNC are: Bobbi, Nancy, Judy and Kathy.

Celebrating 100 years of the Chamber of Commerce building 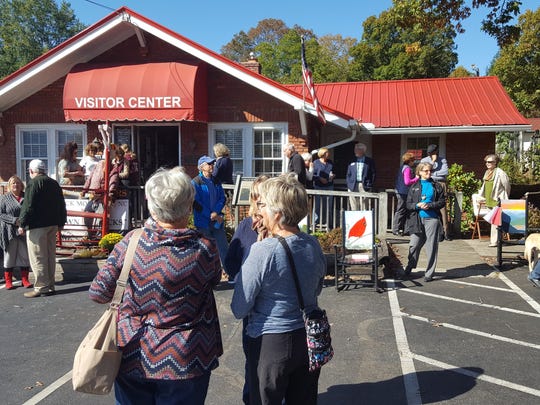 Over 300 Swannanoa Valley residents showed up to the Black Mountain-Swannanoa Chamber of Commerce on Oct. 28 to celebrate the 100th anniversary of the building that is now home to its visitor center. (Photo: SPECIAL TO BMN/Joe Standaert)

Built in 1918 as the McGraw Coffee House, the current Visitor Center  was also the home of the medical practices of  Dr,  Cooley and Dr. Miller before becoming in 1970 the first and the very controversial, ABC store in Black Mountain. In 1983, under the leadership of Andy Andrews it was purchased by the Black Mountain-Swannanoa Chamber of Commerce. Founded in 1923, the Chamber had been in 4 other locations before the little red brick building, at 201 East State Street in Black Mountain, became its permanent home.

The Black Mountain Bistro, next door to the Chamber was the family home of Claudia Crawford McGraw, Black Mountain's "Apron Lady".  Her pound cake recipe is below.

Her pound cake along with refreshments provided by the Black Mountain Bistro were served in her former home on Sunday. Many members of the McGraw family traveled to be part of the celebration.

Rocking chairs painted by artists from the Swannanoa Valley Fine Arts League which were enjoyed last year by shoppers in the historic Black Mountain district, were auctioned off during the event… with none remaining!

It was a wonderful October day of fellowship, community, and celebration. Over $200 was raised in the raffle for local photographs and history books.  This will be donated to Hurricane Relief.

Thanks to all that came and to all those that made it happen, with a special thanks to the article by Fred McCormick which appeared in both the Black Mountain News and the Asheville Citizen-Times

What a wonderful place to live and visit!

(from the handwritten files of Claudia. McGraw, provided by her granddaughter, Lynda McGraw Martin)

I always take about one scant tablespoon of butter off the two sticks. Cream butter and sugar until very light.  Add one egg at a time, beating well after each time.

Sift flour, salt and nutmeg and add a little at a time to the sugar butter and eggs.  NO baking powder.  Bake in tube pan 325 degrees about an hour.

Last week's letter regarding an attempt to extend terms for some of the aldermen was totally an overreach by the letter writer.

If you read the same letter I did,  Alderman Harris was presenting to the public an explanation of what the NC Legislature has presented our Board of Elections regarding Asheville's elections and how it will affect the many municipalities who hold odd year elections. We, along with the other municipalities, will have to foot the bill for elections held on odd years than when other elections take place.

Someone, if we elect to stay with even year elections, will have a one year extended term. I do not think the town will fall into evil hands if three aldermen stay an extra year one time.

If the voters had a fear of that, I don't think they would have voted said persons into office the first time and re-elected them. Black Mountain needs to balance the cost of paying for separate elections if we decide to go it alone on odd years when the rest of county is not holding elections.

Alderman Harris was simply stating our choices and the consequences of our decision. That cost could be half of someone's salary if we choose to insist on staying with odd years and have to pay for that election rather than going with even years and the Board of Elections paying for the whole election process.

That choice bears much thought and Alderman Harris was putting the information out there for everyone's thoughtful consideration. I can't see finding accusations in that.