Deploying beetles to save Montreat's hemlocks

Mount Mitchell’s 100th year as a state park is a time of celebration.

Deploying beetles to save Montreat's hemlocks

Mount Mitchell’s 100th year as a state park is a time of celebration. But it’s also a time of deep concern for the large swathes of dead hemlocks, so-called “gray ghosts” killed by the woolly adelgid, an invasive aphid-like species accidently imported to the eastern U.S. in the 1950s.

The hemlocks on Mount Mitchell and in the Great Smoky Mountains National Park aren’t the only ones being devastated. The hemlocks in Montreat are under attack too.

Residents there have banded together to fight the tiny bugs. Some three dozen households and entities have contributed $15,000 toward attacking the adelgid chemically and with Laricobius beetles that fed on the smaller insects.

The beetles, native to the western U.S. (where they’re doing a great job of protecting the hemlock forests), eat up to 90 percent of the adelgids and, unlike chemical treatment, may turn out to be an inexpensive and sustainable way of stopping the hemlock devastation (by reproducing prodigiously, the beetles can spread more than two miles each year). The Grandfather Golf & Country Club in Linville used them to stabilize their trees and has now abandoned chemical treatment.

Montreat, set in a cove surrounded by hemlocks, has been treating its trees chemically for years. In 2015, with money raised by and from residents, it released about 2,400 beetles in the largest hemlocks along Flat Creek, from Montreat Gate to the Lake Susan dam. The town expects to receive and release another batch of beetles this month.

Heading up the program for the town are residents Rusty Frank, Joe Standaert and John Johnson. On Sept. 28 in Montreat’s Upper Anderson Auditorium, they and other members of the Montreat Landcare Committee were lauded for efforts to preserve the town’s greenery. Johnson and Montreat College outdoor and environmental education professor Dottie Shuman were given leadership awards for their work during the past year. 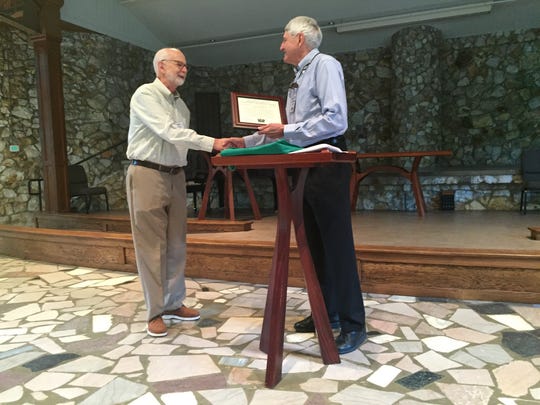 Johnson estimates that Montreat has lost a third of its stately hemlocks, most visibly around the town’s campground. He and others have encouraged homeowners to treat the hemlocks on their properties chemically, in part because the beetles are expensive ($5 each; shaking them out of trees out west takes time) and they’re hard to get. Seaman noted that N.C. Agricultural Commission Steve Troxler was recently in Montreat, which attained the eighth Community Wildlife Habitat status in the nation 11 years ago, to give the town $5,000 toward its hemlock restoration efforts.

The Montreat Landcare Committee is composed of eight organizations and entities that work together to protect, preserve and present the natural features on Montreat Cove. “The Laricobius (beetle) should be a good friend of all of us,” committee chair Bill Seaman said before the award presentations in Anderson Auditorium’s upstairs assembly room.

The hemlocks, shrubs and understory shade are what some of what attract people to Montreat, Seaman said. It’s in the town’s interest to protect one of its greatest assets, he said, noting that Johnson galvanized the town’s actions to save the hemlocks by first becoming concerned about the trees on his own property.

“If we do nothing, we lose all our trees,” Johnson said.