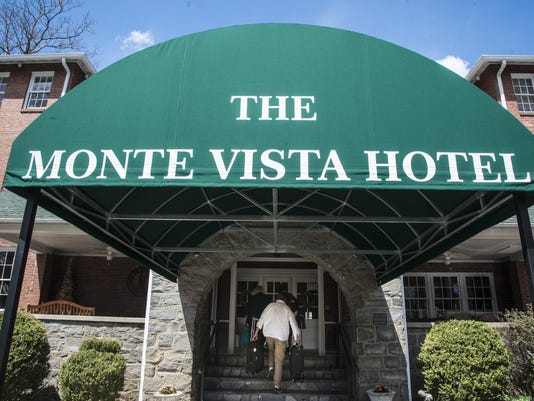 What old is new again at the historic Monte Vista Hotel, managed once again by its owners.(Photo: Paul Clark)

The historic Monte Vista Hotel, the grand dame of Black Mountain’s buildings, is back under the management of owners Sue Conlon and Barney Fitzpatrick.

Caroline Fisher and Anthony Peele announced April 4 that they would be stepping down as a management team.

“We have another business based in Tanzania, and due to some new partnerships, we have experienced explosive growth in the past few months. And it is now necessary for us to manage the project full time,” Fisher and Peele said in a press release. “We are truly excited about what the future has in store for us for our work in East Africa, but we are sad to move on from the Monte Vista, which we have been proud to call home for the past year.”

Operating out of a former school building, the forerunner of the historic hotel was opened in 1919 by Lucien and Rosalie Phillips. The brick building of today’s hotel was constructed in 1937.

Conlon said she and Fitzpatrick were happy to be returning to full-time management of the hotel. They last ran the hotel about a year ago.

“We have had a year of good rest and relative relaxation which we sorely needed,” Conlon said via e-mail. “We were able to actually leave the property at the same time, spend some time together and with family and friends who have all been patient with us for the last six years.

“(The break) also enabled us to step back, take a look at where we are and where we want to go with the business in the future. When you are totally immersed in daily details, it is sometimes difficult to think in terms of ‘the big picture.’”

Conlon and Fitzpatrick arrived in Black Mountain in 2010, purchasing the hotel that year in what they hoped would be part of a fun and interesting retirement. Once in, they realized how much work lay ahead.

“We also became aware of just how central and important the Monte Vista was in the memories and lives of all the folks here,” Conlon said. “Our fun historic project took on new meaning by virtue of the responsibility we felt to Black Mountain and everyone here. As we completed renovations and opened more and more of the hotel for business, we realized that the potential was that of a large and active business, not the sleepy retirement we envisioned.”

Fisher and Peele’s departure did not come as a surprise, Conlon said.

“Tony and Caroline’s tenure here was always of a temporary nature,” she said. “During their time here they used their expertise to expand the business through a better Internet presence, the hiring of additional staff and improvements in daily operations that will enable us to grow more efficiently. We have been with them all the way on these changes, and we return to a management system which will enable us to grow further and realize our potential.”

Conlon said if she and Barney had continued to do everything themselves, the growth would not have been possible. She emphasized that success in today’s hospitality business requires development of multiple and integrated streams of revenue - something she said has been done at the Monte Vista. Revenue is generated from guest room occupancy and event bookings with food and beverage service.

During the year Conlon and Fitzpatrick were absent, Ashley Barger took over the responsibilities of the front desk, the heart of the hotel. The new reservation system enables the hotel to take bookings day and night, as well as accommodate the needs of a full hotel. Travis Eberhart, the new executive chef, has responsibility for kitchen operations at the hotel’s restaurant, The Palate Restaurant.

“With Eberhart’s expertise, we can serve the needs of our restaurant patrons as well as the 50-150 guests which we typically have at events,” Conlon said. “So far for 2016 we will be hosting seven weddings, 20 rehearsal dinners and numerous meetings and conferences, most accompanied with full hotel occupancy. None of this would be possible without a fully integrated operation. The scope of business development is what is required to keep the Monte Vista financially viable and successful.”

Although the Monte Vista Hotel is growing, Conlon said it is still the place where you can come for a quiet dinner, a birthday party or a drink. It is still the place for community activities and events like the upcoming annual Garden Show and Sale on Saturday, May 21 and Deck the Trees, the annual fundraiser for Swannanoa Valley Christian Ministry.

“The Monte Vista still belongs to Black Mountain,” Conlon said. “Barney and I will be here, as we always were, and (will) continue to improve and grow the hotel. We have recently added a cozier dining area to the bar (Fitz’s Taproom), re-renovated some rooms and are in the process of expanding the parking area in front, as well as constructing an event gazebo on the front lawn. We look forward to a spectacular year and a secure future for The Monte Vista.”