Fitness pro wrestles with the present

Inside the ring, she’s the bad girl

Fitness pro wrestles with the present 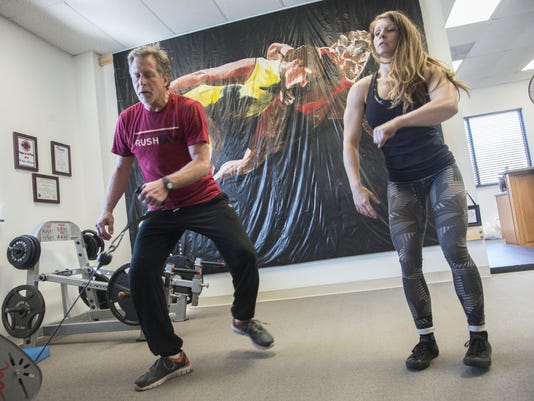 In the Black Mountain fitness community, Sarah Worley is known as a passionate personal trainer who works with clients at Ascending Fitness. What people might not know is that Worley has an alter ego, a character that plays the bad girl in the professional wrestling world.

Who knew? Good-natured and funny, Worley is a fitness fanatic who is positive and encouraging. At Ascending Fitness, she leads small group fitness classes and works one on one with clients to help them progress toward their health and personal fitness goals. Owner Jim Frith said she is doing wonderful things with clients there.

Passionate and knowledgeable about fitness, Worley is gratified to hear that a client feels stronger and healthier through his or her work outs with her. Worley, who grew up in the area, was a student-athlete at Enka High School.

Others, though, know another side of her that took her far from small-town life to arenas with large crowds.

As a child, Worley was fascinated by the professional wrestlers on TV. She spent hours imagining what it would be like to do what they were doing.

Like many people, her childhood dreams and choices foretold the path she would follow as an adult. She was a gymnast from age 5 until middle school. She won a girls push-up contest in school as a sixth-grader. As a teen, she excelled in school sports. She took up weight-lifting and in 2008 earned her Certified Personal Fitness certification from the National Academy of Sports Medicine. She liked being strong; physical challenges excited her. She became a personal trainer in 2008.

As an adult, she recalled her childhood fascination with professional wrestling and was motivated to give it a try. Watching it on TV, she often told herself she could do that.

Her path to professional wrestling was long, one that involved a lot of determination. She turned to Twitter to learn about wrestling company promotions that trained people to wrestle. She piqued the interest of one company that lined up her up with a Charlotte wrestler who had a lot of success in the ring. For six months she traveling to Charlotte several days a week to train all day.

Her training paid off. A month later, she appeared in her first professional wrestling match, using the stage name D’Arcy Dixon. Her name and her new stage personality portrayed a woman quite different from herself, a mean, insulting, violent character meant to antagonize a subset of viewers. She chose her stage name because she thought it sounded evil.

Her first match was hard, and she felt she performed poorly. But as she got more experience, her love for wrestling deepened.

“It took me a long time to get the courage to chase my professional wrestling dream, and I’m so glad I did,” she said in a recent interview.

A star for Impact Wrestling and an extra for World Wrestling Entertainment the last four years, she was been appeared in Chicago, Philadelphia, Kentucky, Iowa and places all over the Southeast. Her gigs as the “heel,” or the bad guy, are for one match only and involve 5-30 minutes total. She played the role of Donald Trump’s daughter in a wrestling match in Iowa last year that was watched by Bernie Sanders. She has suffered a concussion and chipped a tooth.

The task of professional wrestlers is to make fans to suspend disbelief through athletic movement and role playing. Trying to make the “baby face,” the good guy, look good, the “heel” engages the crowd and controls much of the match. From a business standpoint, the goal is to excite and entertain the audience, thereby increasing TV ratings and sales of ticket and merchandise.

“I love the creative outlet and artistic process of becoming the performer in matches,” Worley said. As an observer of people and their mannerisms and reactions, she likes the challenge of incorporating what she observes into D’Arcy Dixon’s character. “If I’m not wrestling, my mind can get bored,” she said.

Though she hasn’t reached her dream of becoming a superstar, she has had good exposure and has been able to meet many of her wrestling idols. She still wrestles, but not as much as before. She feels a need for a more consistent home schedule, primarily for her two sons and also for the local clients she loves training.

At ages 8 and 14, her boys think it’s cool that mom’s a pro wrestler. “But they are not really into watching it,” she said. “My hope is that because of the example I am setting for my boys, they too may one day have the courage to chase an outside-the-box dream.”

“When you really love something, it’s hard to let it go,” she said of wrestling. “My wrestling community is good for me to be around because we share a common passion.”