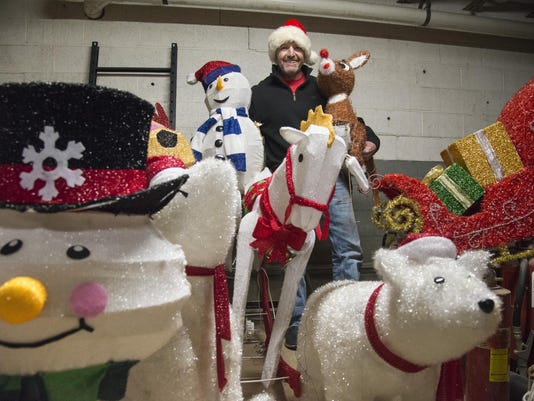 A babe in toyland, Kenny Ford practices suiting up for his post-retirement role as grand marshall of the Black Mountain Christmas Parade.(Photo: Paul Clark)

Kenny Ford, grand marshal of the Black Mountain Christmas Parade, will probably get a little nostalgic when the parade passes Hey Hey Cupcake on Saturday.

The building on State Street was home to his father’s barber shop for nearly 50 years. It was also the site of a little mischief, Kenny Ford-style.

Owen High School’s legendary football coach until his retirement this year was the “obvious” choice for grand marshal this year, said Bob McMurray, executive director of the Black Mountain-Swannanoa Chamber of Commerce.

Grand marshals are “usually former mayors or community leaders, people that grew up in the Valley and made a difference,” he said. “Some years we have four or five (candidates). ... I don’t think we considered anybody but Kenny (Ford) since his retirement.”

McMurray said the parade, which steps off Saturday at 4 p.m., has a history that goes back to the 1940s or 1950s and has included many faces familiar to the Swannanoa Valley.

Ford’s learning that he had been selected to lead the parade left the normally loquacious coach uncharacteristically at a loss for words.

“The feeling was just, wow,” he said. “I really didn’t know what to say. But it’s a tremendous honor.”

Ford’s familiarity with the parade dates to times when he and his brothers watched from the building that housed his dad’s shop for so many years. One of Ford’s fondest memories watching the parade as a child involves a year when snow fell in the days prior. A hidden spot atop his father’s storefront provided him and his brother David with the cover to toss a few snowballs.

“Joy to the World” is the theme of this year’s parade, which fits Ford, whose 29 years as the head coach of the Warhorses were certainly a joy to many Owen fans. A Swannanoa Valley native who dreamed of coaching Owen, Ford remains humble despite 230 wins and 14 conference titles.

“I never felt like I did anything special,” he said. “I used to just tell my guys, ‘do your job and do it well,’ and all that I was doing was just doing my job.”

Ford’s dedication was born in the 1970s on the field as an Owen High football player under the tutelage of coaches who taught him to strive for success.

“Don McKenzie, who was over at the Presbyterian Home when I first got the job at Owen, told me, ‘You know what, Kenny? You got to get those boys to play for you,’” Ford said. “And you know what? I always played my hardest because I wanted to please that guy that was coaching me, and Don McKenzie was one of those guys.

Being selected as the grand marshal validates Ford’s commitment to the generations of Warhorses that he coached.

Like so many other things in Ford’s life, Christmas has collided with football in the past. As a child he found an electronic football game under the tree. It helped spark his passion for coaching.

“I can remember getting to the tree and seeing that game in the back, and I was jacked up,” he said. “I mean, I wrote plays in a book and I’d set those guys up in formations and turn it on. I’d draw different formations on pieces of paper. It started snowing that Christmas morning, and by that night there was 8 or 9 inches on the ground. It was a beautiful snow, and that’s one of those memories that just locked in with me as a kid.”

Ford’s passion for the game has not waned, even in retirement. He provided color commentary for four televised Western North Carolina high school football games this season, allowing him to remain in the game he loves. He hopes to return to TV next season.

Ford plans on being joined by his mother Dorcie in Saturday’s parade.

Former Owen football players are encouraged to wear Owen jerseys and march along with Ford.

The Black Mountain Christmas Parade through downtown kicks off at 4 p.m.