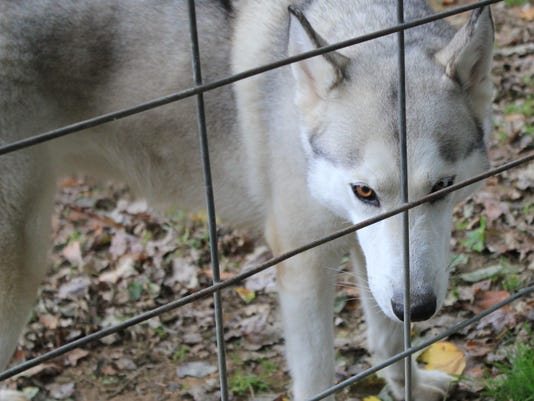 Karma must remain in her enclosure at all times to be in compliance with the agreement that Nancy Brown signed in order to take her into custody.(Photo: Fred McCormick)

The story of Karma played out over the course of months in Orange County, Calif., but the next chapter of the dog’s life will be written locally in the Broad River community.

Full Moon Farm is the new home of the dog following several, drama-filled weeks that included a fight to save the animal’s life.

Karma was removed from a California family’s home in the wake of a domestic dispute, unrelated to the animal.

She was designated a vicious animal after a DNA test revealed traces of wolf. A superior court judge ordered that Karma be euthanized when a county agency reported that a neighbor alleged that the dog had killed a cat in 2012.

Nancy Brown, owner of Full Moon, learned about the situation through her connection to the wolfdog community. According to her, DNA tests can be misleading when it comes to determining a dog’s wolf content.

“This dog is not a wolfdog,” Brown said. “She’s a husky-malamute mix. I managed to get a picture of the dog’s father. The registration papers supplied to the court were for a husky and that’s not this dog’s parents.”

Brown said that the paperwork supplied to the court claiming that the dog was a husky did not account for the physical signs of the dog’s malamute lineage.

“She has malamute ears and malamute head structure and a Siberian (husky) body,” she said. “This dog is a northern breed mutt, in my professional opinion.”

Brown points out that northern breeds, which consist of dogs bred to flourish in the Arctic, are likely to have some traces of wolf in their DNA.

Through her research on Karma’s history Brown has developed doubts about the claims that the dog killed a cat.

“The witnesses said that the dog that killed the cat was white. Karma clearly has a gray coat,” she said. “There may have been some sort of neighborly dispute that contributed to the allegation.”

Residents in Orange County and from around the world became involved in Karma’s case after she was ordered to be euthanized on Sept. 9. That decision was reversed after an outpouring of support that included an online petition that reportedly garnered nearly 400,000 signatures.

“It was a human interest story,” Brown said. “Orange County is huge. Many of the shelters in California are under the eye of animal advocates.”

Ultimately, while Karma’s life was spared, Orange County decided that the designation of the dog as a vicious animal should remain.

But in the week that Karma has been at the sanctuary Brown believes that the dog displays the most advanced social skills of any of the seven dogs at Full Moon that do not meet the wolfdog classification.

“I’ve handled at least 500 dogs, and probably more,” Brown said. “She just doesn’t have it (aggression) in her. She’s bonded to humans. This dog is add collar, instant pet. Ninety percent of my animals are not.”

Brown believes that she will be ready to ask Orange County to remove the vicious animal designation from Karma in about six months.

“I will have a behaviorist work with her and write a report,” she said. “I will have my veterinarian issue a certification when she goes in there and eventually have animal control come out to work with the dog and write a statement that she is not a danger to society.”

George Stapleton, a member the Full Moon board, transported Karma from California to the Broad River sanctuary. According to Brown, Stapleton’s reports about the dog’s behavior on the cross-country trip were overwhelmingly positive.

Karma was placed in one of the sanctuary’s enclosures, measuring 40 feet by 40 feet. Brown said she is adjusting well to her new environment even as the clean up from a storm system that came through in recent weeks continues.

“We had an enclosure decimated by the storm,” Brown said. “So that’s something that we’re taking care of right now. And of course, we always need support from the community.”

The Full Moon Farm is hosting a fence rebuilding and clean up party on Oct. 17 and 18 and Brown encourages the community to support the sanctuary.

“Cases like this one with Karma happen all of the time,” she said. “That’s one of the things that makes the work we do here so important.”