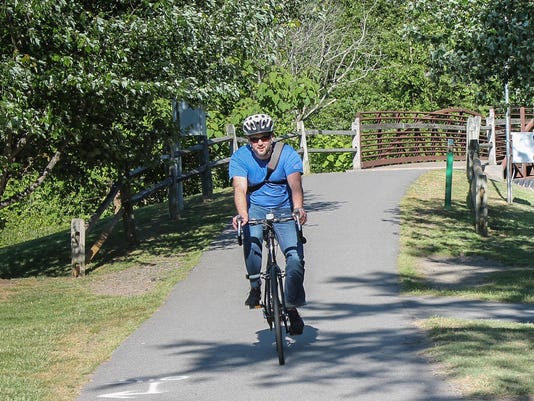 There are plenty of safe places to ride in Black Mountain, but there are other places where it’s not so safe.(Photo: SPECIAL TO THE BLACK MOUNTAIN NEWS)

Organizers of a community ride on Saturday are hoping to get suggestions of how Black Mountain can improve riding for bicyclists.

Input from the ride, which begins at 10 a.m. at town square, will help formulate the town bike plan, one meant not only to make riding safer and better for residents but also meant to make Black Mountain a travel destination for people who want to ride their bikes.

The plan is targeted toward the bike enthusiast and the rider who merely wantes to bike to work, to the park or to downtown. It is meant to enable cyclists of all ages and abilities to bike around Black Mountain safely. There are currently no on-road bicycle facilities, such as bike lanes and paved shoulders, in Black Mountain.

The plan is about “making sure, on and off the road, that bicycling is an option for people,” said Brian Taylor, an urban planner at Chipley Consulting in Asheville, one of four consulting firms working on the plan.

Organizers are hoping to learn more about barriers to riding in town, as well as opportunities that may exist that they haven’t noticed already. They hope to get suggestions of where bike lanes and road shoulders could go. Some people at the community ride may show up with ideas; others may have them as they participate in the ride, Taylor said.

Leading the ride will be Don Kostelec, the plan’s project leader. Depending on the number of stops the ride makes – for discussions and suggestions – the route the community ride will be three to five miles long and take about two hours.

There are many streets in Black Mountain that are safe for bicyclists, but there are many, including U.S. 70, Old 70 and Montreat Road that are not. Even the most dedicated cyclist is vigilant riding along N.C. 9 from The Villages of Cheshire to downtown Black Mountain. Certain intersections and curves are especially difficult, riders have already told the plan consultants.

“There are a lot of roads where it is dangerous to ride,” Taylor said. “If there are places where you wouldn’t want a 12-year-old to ride, we want to look at that.”

The consultants are halfway through their work and hope to have a plan for the public to review by the end of October. More than 250 people have taken the bike survey, many at blackmountainbikeplan.wordpress.com and others at the June and July Park Rhythms events at Lake Tomahawk. On Bike to School Day this year, consultants reached out to parents, asking them at the head of the Flat Creek Greenway near Black Mountain Primary what their concerns were.

A quarter of those surveyed so far have said they ride their bikes three or more days a week.

The plan will let the town know where to spend “that first dollar” on bike planning, Taylor said.