Swannanoa Swamp create habitat for aquatic wildlife in the mountains 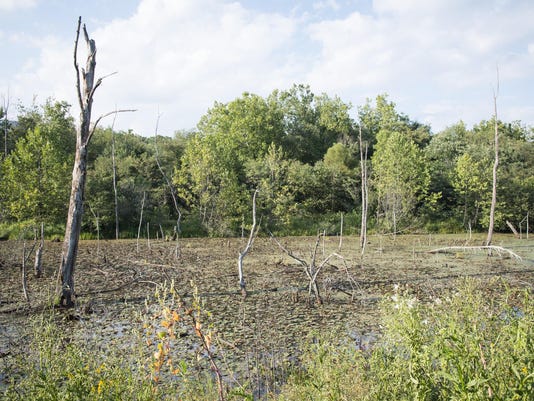 As dismal as it seems, the Swannanoa Swamp is probably home sweet home to lots of forest and wetland creatures.(Photo: Paul Clark)

As summer turns to fall, a rare body of wetland is poised to take on interesting colors and textures.

The Swannanoa Swamp, as it’s colloquially known, on U.S. 70 between Swannanoa and Black Mountain, is a unique body of water that sustains aquatic and wildlife while providing a unique beauty unusual to the mountains.

The swamp, especially attractive when hundreds of pink water lilies are in bloom, intrigued two eagles this spring. But after a few days, they were on their way.

Bill Alexander, a Swannanoa Valley historian, said the Alexander family used to own what is now the Asheville East KOA campground pond and extensive property on the north side of U.S. 70. The family did not own what is known as the Swannanoa Swamp.

“In the early 1950s, Grove Stone & Sand, under the management of a man named Northcott, wanted to dig out granite and whatever they could get out of it,” Alexander said. “They were getting something for nothing, so they said they would make a lake where they had dug. The lake that was created is the same one that is at the KOA campground today.”

Alexander thinks the lake leaked and created the swamps.

“I think the lily pads are beautiful, but I don’t care what happens to the swamp land,” he said. “I grew up with it there. Mosquitoes are drawn to any body of water.”

Sue Ellen Morrison, lead communicable disease nurse with Buncombe County Health and Human Services, did not know of any issues related to the Swannanoa Swamp. But noting that mosquitoes can lay eggs in a teaspoon of water, she advised wearing repellent or protective clothing when outdoors around water and mosquitoes.

James Clark, owner of Eye For Detail at the west end of the swamps, said he has never been bothered by mosquitoes from the swamps. Mike Carraway, N.C. Wildlifes Resource Commission biologist, said he thinks the swamps should be left alone.

“I think the positives far outweigh the negatives for having the swamps,” he said. “We don’t have many wetlands in the mountains. The swamps sustain a lot of aquatic life and attract wildlife.”