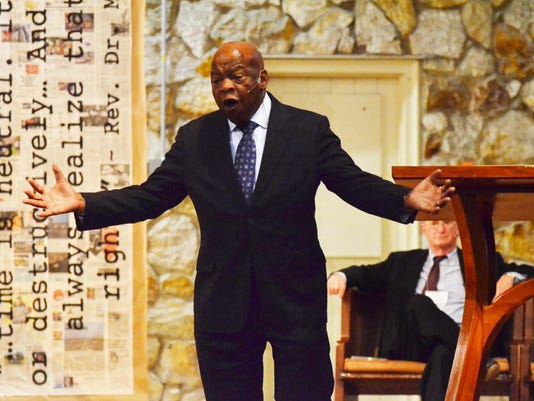 “We need to make some noise, we need to speak up and speak out,” U.S. Rep. John Lewis told the crowd at Montreat Conference Center.(Photo: SPECIAL TO THE BLACK MOUNTAIN NEWS)

(Editor’s note: This story appeared in The Asheville Citizen-Times on Aug. 24.)

Even when he thought he would die after being beaten bloody on Edmund Pettus Bridge in Selma, Alabama, the Civil Rights leader and democratic congressman from Georgia had no fear.

“Step out there with grace, faith and love and do not be afraid,” Lewis said at the Montreat Conference Center, 50 years after Martin Luther King Jr. spoke on the same stage with his message of love and nonviolence.

“We need to make some noise, we need to speak up and speak out and find a way to get in trouble, good trouble, necessary trouble,” Lewis preached, pacing back and forth on the stage. “The American church is too quiet.”

“We have to build a coalition of consciousness like we had in another period,” said Lewis, the only member of the “Big Six” Civil Rights leadership still alive.

“I am happy because I’ve seen change,” Lewis continued. “The signs that I saw that said ‘white men’ ‘colored men,’ ‘white woman,’ ‘colored woman,’ those signs are gone, and they will not return. The only place you will see those signs is in a book, in a museum or a video ... but there’s still a lot of work to do.”

Lewis called on the crowd to use compassion, respect, kindness and humanity to bring about change. He told stories of the Civil Rights era, about his days as a Freedom Rider, about being spit on and having cigarettes put out on his back or burned with hot coffee trying to desegregate lunch counters.

He talked about being denied a library card and being beaten over and over again. He discussed his ongoing commitment to civil disobedience.

“When I got arrested, I felt free,” he said. “I felt liberated. I felt like I crossed over, and I have not turned back since.”

To much applause, Lewis encouraged the crowd to protect voting rights.

“All of us must get out there and see that all of our people all across America are registered and then turn out on Election Day and vote like you have never voted before,” he bellowed. “The vote is precious, in a democracy it’s almost sacred, and we have to use it for good.”

Retired Presbyterian minister Rob Williamson, of Seymour, Tennessee, was one of several in the audience who had heard King speak in Montreat five decades ago. He was 19 at the time, and his family was in Western North Carolina on vacation.

“I remember being caught up in the awesomeness of Dr. King’s personality and message,” he said. “I was very deeply, spiritually moved. It wasn’t like I hadn’t heard him before on TV, but to be in the presence of him was something else.

“There are almost as many people here tonight as there were then,” Williamson added “With this group of people and their response to the speakers, there is no doubt in my mind that they will leave here with the feeling of, ‘Let’s get going.’”

Maya Whaley, 17, was one of several teenagers from St. James Presbyterian Church in Charleston, South Carolina, to come to the conference. She said the mood in her hometown after a white gunmen killed worshipers at a traditionally African-American church in June has remained somber.

“Charleston is stronger because of that, it pushed us together,” she said, adding that Lewis and others inspired her to go back and mobilize her peers. “We have come far, but we still have a way to go. I definitely got some encouragement here.”