Race To The Taps concludes with beer

Pisgah Brewing hosts the next race in the series

Race To The Taps concludes with beer 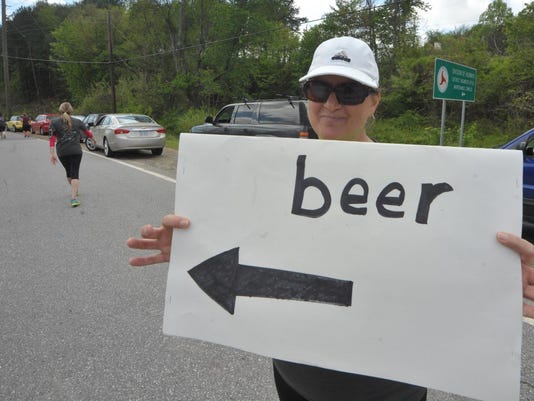 Anna Flowers holds an inspirational message for runners during Race to the Taps at the inaugural Run to the Taps at Highland Brewing in April.(Photo: The Asheville Citizen-Times)

A unique six-race series known as Race To The Taps will make a stop in the Swannanoa Valley this weekend when Pisgah Brewing Co. hosts the 4-mile event.

On June 12 the brewery will be the site for the second race in the series, with a portion of the proceeds going to benefit the local greenways.

The brewery hosted the Black Mountain Greenway Challenge 5K and 10K in April, which raised over $4,000 for the popular trails, according to greenway commission vice chair Becki Janes.

That money will be combined with what is generated from the race this weekend. Those funds, in addition to what was raised by the commission in a recent fundraising campaign, go toward the Riverwalk Trail section of the greenway system.

The section of trail, located behind Bi-Lo, has not yet entered the design process and will require a review by railroad company Norfolk Southern before it can cross under a rail trestle in its path.

“That’s the push right now,” Janes said. “We’ve been focused on that section of the greenway.”

Other organizations in the area have already contributed to the project. Friends of Connect Buncombe donated $2,000 at the beginning of the campaign, and Blue Ridge Bicycle Club would match up to $4,000 raised by the commission.

Runners will leave from the parking lot of Pisgah Brewing and return toCarver Community Center and return to Pisgah. There is still time for runners to register.

Following the race, runners and spectators can enjoy music from Pigeons Playing Ping Pong in the tap room. Runners 21 and older who finish the race will receive a free beer.

Craft beer-related prizes will be awarded to the top three male and female finishers in each age group.