Streaming shows have been on Bob Hinkle’s wish list for some time, he said, but something else would eventually take precedent of those plans. 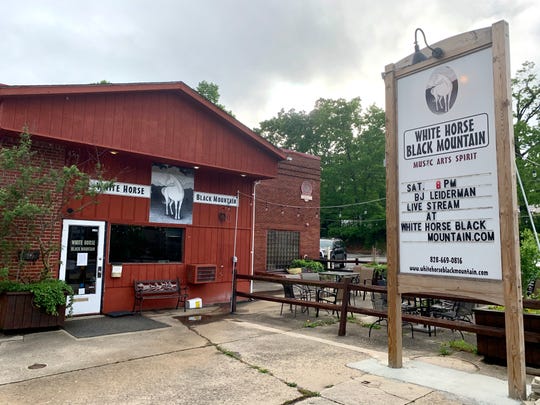 A sign outside of White Horse Black Mountain advertises a livestream event while the venue remains closed amid the coronavirus on May 21. (Photo: Casey Blake)

BLACK MOUNTAIN - Live concerts in front of a live audience haven't been possible for months due to the impact of the COVID-19 pandemic.

That has meant a fight for the future of his business for Bob Hinkle.

As owner of White Horse Black Mountain, the music venue in downtown Black Mountain, Hinkle needed a way to keep his business going. With live concerts not possible, Hinkle has shifted courses.

For seven weeks now, White Horse Black Mountain has hosted a streaming concert, "White Horse Live," which has been posted on its website on Saturday night.

“The survival of White Horse Black Mountain is nearly totally dependent on proceeds from ticket sales and bar revenue. Since, under the current restrictions as of today, neither are available to us, so donations from livestream viewers, who are moved to help us, are all we have to create a bridge between where we are and some sort of live show resumption,” Hinkle said in an email interview. “We've applied for several grants/loans and are hopeful about the help that might bring, but for now we're hanging on with the help of our patrons' generosity.”

The next show is set for 8 p.m. on Saturday, June 13, with the singer-songwriting duo of Sandy and Richard Riccardi, who perform progressive parodies and comedy cabaret. This will be the couple’s first streaming concert of the year.

Hinkle said he and his staff take every precaution possible, from thorough cleanings to social distancing, to make the event happen.

Streaming shows have been on Hinkle’s wish list for some time, he said, but something else would eventually take precedent of those plans. Because of the virus, he has worked with Asheville’s RadHaus Studios, which is headed by Rebekkah Hilgraves, to create the current series. RadHaus Studios is a unique mobile recording studio and audiophile label.

“It was a wonderful coming together of forces which, when combined, provided a total value which is indeed greater than the sum of its parts,” Hinkle said.

“We're very aware that many artists and companies are creating livestream programming. It only makes sense that creators, and indeed businesses, would wish to do whatever they can to maintain contact with their fans and try to increase those numbers,” he continued. “What we've seen from looking around is that the majority of these efforts provide some good artistry and enthusiasm and are often worth seeing on that basis alone.”

Hinkle said that “White Horse Live” is “an effort to up the ante a bit” in terms of production value. There are five cameras, professional lighting and a professional crew to produce the show.

To choose which artists perform on “White Horse Live,” Hinkle said there are several factors: Are they available and willing to perform? Can the artist fill an hour with first-rate content? Does the camera like the performer and vice versa?

“Since most of these streams present a much more intimate version of the artist, it's important they give cameras close-up to medium shots that help their cause with viewers,” Hinkle said. “I don't want to give the impression that artists need to be all sweetness and light. They don't. On the other hand, humor is a positive tool in livestreams. If well presented, it's a great communicator in this medium. Something about humor well presented in a live context, it feels more off-the-cuff.”

It can be difficult for artists, though, who are accustomed to live audiences reacting to the presented music. There’s no applause sign for livestreams and no way to hear people singing along from their couches.

Brodsky said that he has to trust his abilities and not let the lack of feedback throw him off during these types of shows. As the pandemic continues, artists have become more accustomed to streaming shows. Brodsky, in fact, recently launched a weekly series that has been viewed more than 2,500 times and from fans in 11 countries.

“It’s odd at the end of a song, when the guitar is still ringing and there’s no applause to cut it off, which ordinarily would create a little buffer before I'd speak again,” he said. “That’s been the trickiest aspect for me, having to adjust my sense of timing, and develop a feel for that precise moment when I should start introducing the next song, without allowing for any awkward dead air.

“I also really like making eye contact with everyone in my audience, connecting with them, feeding off of their energy, and reading their reactions. I don’t get that now with streaming, so I have to draw on my 40 years of experience performing to remember what that’s like, and I just have to trust that my songs are having the affect I hope they’re having, even if I can’t see for myself whether they are or not.”