Valley Rewind: Stripes but no Stars

In 1875, in an effort to cut costs, the Western North Carolina Railroad began leasing convicts to help lay track from Old Fort to Asheville.

Valley Rewind: Stripes but no Stars 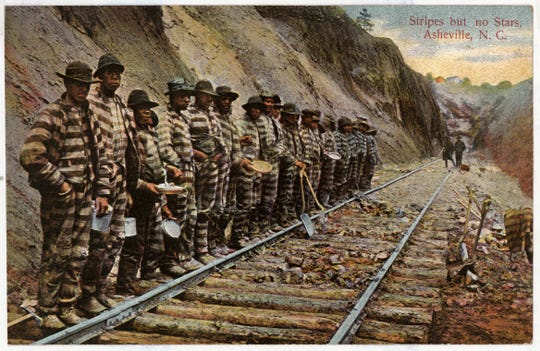 In 1875, in an effort to cut costs, the Western North Carolina Railroad began leasing convicts to help lay track from Old Fort to Asheville. Some of the convicts are seen in this historic postcard. (Photo: Courtesy of Swannanoa Valley Museum)

In 1855, the North Carolina legislature issued a charter to the Western North Carolina Railroad to begin laying track from Salisbury to “beyond the Blue Ridge.” The outbreak of the Civil War delayed construction and it wasn’t until 1869 that track was laid into Old Fort. The steep grade and corruption among those granted money to complete the line delayed the continuation of track into Asheville. Finally, in 1875, in an effort to cut costs, the railroad corporation began leasing convicts, a few of whom are pictured in this historic postcard from the Swannanoa Valley Museum & History Center's extensive archive. The convicts were primarily African Americans imprisoned for petty crimes, who were forced to perform the brutal work required to cut embankments, culverts, arches and tunnels into the mountain. Because the railroad could simply lease another convict if one died while working, there was little incentive to keep the men healthy, and during the course of construction 125 workers died in tunnel cave-ins and other accidents. Leased convict labor was officially abolished in the United States 1941, however, penal labor is explicitly allowed by the 13th Amendment of the U.S. Constitution. Prison labor today takes different forms depending on state and federal programs. The effort to make prison labor safe, voluntary, and humane is an ongoing issue in the United States.