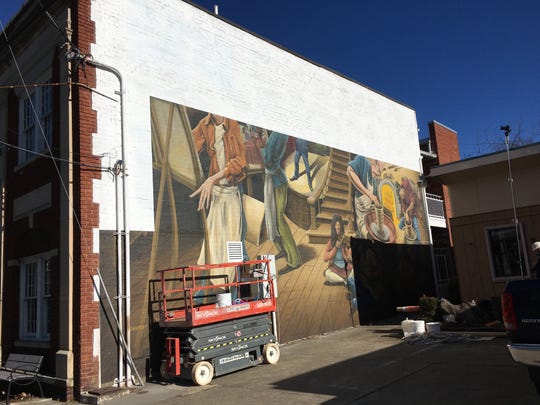 A mural by Scott Allred and Jeremy Russell of Brushcan Custom Murals and Design is installed on the western wall of the Black Mountain Center for the Arts. (Photo: SPECIAL TO BMN/BMCA)

Drivers heading east into town on U.S. 70, just past the intersection at North Dougherty Street and check out the new mural being applied to the exterior brick wall of the Black Mountain Center for the Arts.

A dream many years in the making, the mural is a stylized representation of all the activities that take place inside the historic building. Asheville artists Scott Allred and Jeremy Russell of Brushcan Custom Murals and Design worked with leaders of the Center for the Arts to create a big impact on the aging west wall of the building.

Former BMCA Executive Director Gale Jackson led the team making this dream a reality. She worked with Brushcan through the various iterations of the design.

“Jeremy and Scott were inspirationally creative and attentive to our requests,” Jackson said.

Now a new generation of leadership has stepped in to finish the job.

“This has been an amazing process,” said Lori Cozzi, the art center's current executive director. “I was a part of the brainstorming for this project as a BMCA board member, but to have it come to fruition in my first months as director has been an honor. Aside from the artistry evident in the mural, the process of applying the mural to the building is an art in itself.”

The very detailed and laborious process began with a series of draft versions that were commented on and refined by the BMCA mural committee. Once a final image was agreed upon, the Brushcan artists painted the mural on the floor inside a large warehouse.

BMCA is extremely grateful to the Town of Black Mountain for providing this space. The work was then cut into sections. The west wall of the Arts Center was pressure washed, primed, and with the help of a mechanical lift, the sections were painstakingly applied one section at a time. A final clear coat will complete the project.

“I’m thrilled to see a long time vision finally being realized through the mastery of The Brushcan Muralists,” said artist Libba Tracy, one of the BMCA board members involved in the process.

“The composition will be a view inside the historic building showing all of the arts supported by BMCA including fine art, drawing, painting, ceramics, dance, theater and music,” says Allred. “It was designed in a traditional 1930s Works Progress Administration mural style. A public mural on the side of BMCA is a great way to continue their tradition of ‘Bringing Arts to the People.’"

While the mural has been partially funded by a grant from the Asheville Area Arts Council, the N.C. Arts Council and many generous individual donors, BMCA continues to solicit the remaining funding for this project.

To support the BMCA mural, vist blackmountainarts.org/mural, or stop in from 10 a.m. - 5 p.m., Monday through Friday, to donate and see what’s going on for yourself.