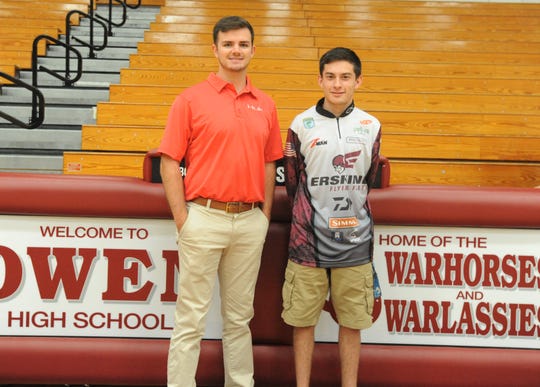 Owen senior Hunter White, right, became the first scholarship angler for the Erskine College fishing team, Oct. 17. The program was founded, as a club sport by Ryan Teems, left, when he attended the Due West, S.C. college. The Flying Fleet will open their inaugural season as an official Erskine Athletics program in the spring. (Photo: Fred McCormick)

There figures to be plenty of monumental firsts in store for the fishing program at Erskine College as it enters its inaugural season as a competitive sport. A team, led by alumnus and head coach Ryan Teems, will represent the Due West, S.C. college in a fall invitational tournament before kicking off the 2020 season in the spring.

One of those key moments for the Flying Fleet came Oct. 17, with the signing of Owen High School senior Hunter White.

“He’s our first official team member on an athletic scholarship,” Teems said moments before White, who has been fishing since the age of 2, signed his name. “We have an incoming class of 12 for (2021), and he’s the first.”

White was an angler for seven years when he began his competitive bass fishing career at the age of 9. He wasted little time making a name for himself in junior tournaments for The Bass Federation and Junior B.A.S.S.

A five-time state championship in The Bass Federation, White has twice been recognized by the Town of Black Mountain for his accomplishments as an angler. He is currently in his senior season in the TBF Student Angler Federation.

“This is a dream come true,” White said of signing to fish for Erskine. “It feels like all of the hard work has paid off. It’s been many years of waking up early, staying up late, fishing in the rain, fishing in the snow, fishing when it’s 100 degrees. You can’t take days off.”

White’s work ethic was one of several qualities that stood out to Teems, who started the Erskine fishing program as a club sport as a student at the college. The college added fishing to its roster of competitive sports in May of this year.

“I had the chance to meet him at a national tournament in Alabama,” the coach said. “He was there competing among some of the best in the world, so it was very obvious that he could fish. But I had a chance to go out in the boat with him and it was one of the most fun days I’ve had, watching someone fish. It was like being in a boat with a pro.”

White’s success on the youth and high school levels hasn’t gone to his head, Teems continued.

“He’s so young, but has so much experience and he’s incredibly humble about it all,” he said of White. “It’s really exciting for me as a coach.”

While Owen does not offer fishing as a sport, athletic director Anthony Lee hosted the signing, which included White’s parents and friends. 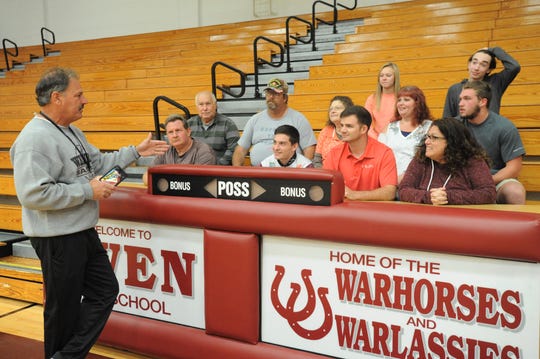 “We’re very proud of you, Hunter,” Lee said. “You’ve had this passion for a long time, and this passion has turned into something you could possibly make a career out of. We wish you the best of luck, and as we say to all of our athletes, Owen is always your home.”

White hopes his signing will inspire young aspiring anglers in his hometown.

“Around here there aren’t a lot of lakes, so you have to sacrifice a lot if you want to fish competitively,” he said. “But hopefully kids can see that fishing can lead to opportunities like this, and that can bring more of them into the sport.”

Teems believes White will have an immediate impact on the Flying Fleet program.

“I see him being in contention to win every tournament we go to,” he said. “I know that he has a desire to fish professionally, and that’s something I will try to work with him on. I feel like he has a bright future ahead of him.”

Fishing at the collegiate level will be challenging, White said, but he’s eager to embrace the opportunity to sharpen his angling skills.

“I’ll have to learn new lakes, new ideas and techniques and a whole new style of competitive fishing while going to college,” he said. “I’m really looking forward to it.”