An Oct. 5 event at the Swannanoa Valley Museum will celebrate Beacon Manufacturing and the return of the designs that helped make it successful 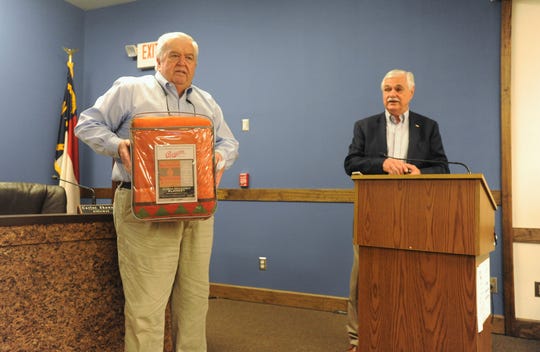 Tedd Smith, left, holds up a blanket from Beacon Linens & More, which he founded with Steve Hutcherson (right) in 2014. The company features blankets using vintage designs from Beacon Manufacturing, where Smith worked before it closed in 2002. (Photo: Fred McCormick)

Few things bring about the warm feeling of nostalgia in the Valley like the mere mention of Beacon Manufacturing. Until its closing in 2002, the 1-million-square-foot factory in Swannanoa produced 500 million blankets, employing thousands at its peak.

That history and more will be shared at the Swannanoa Valley Museum & History Center, which will host Beacon Blankets Make Warm Friends Day, from 10 a.m. - 3 p.m. on Saturday, Oct. 5, and the celebration will feature a pair of textile industry veterans who are bringing the name, and many of the iconic designs, back.

Tedd Smith and Steve Hutcherson launched Beacon Linens & More in 2014 in an effort to revive the brand and its heritage by creating unique products to fit the modern market. A year later, after patenting a design for a bacteria-killing, silver-infused fitted sheet, they knew they were onto something.

“We sold five solid-color sheet programs pretty immediately after we formed the company,” said Hutcherson, the CEO of Beacon Linens. “We sold it to a kevlar company that’s biggest consumer complaint was due to their sheets not fitting, or not staying on during use. Once they switched to our sheets, those problems went away and that gave us empirical evidence that the design worked.” 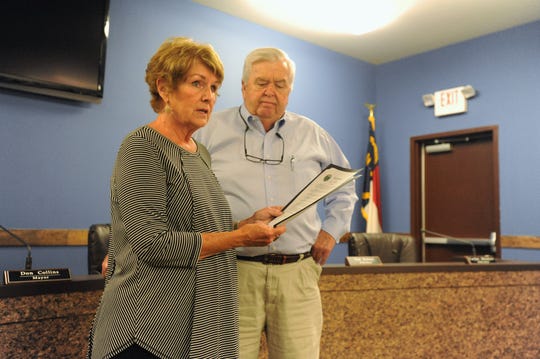 “It’s my privilege to give this proclamation, because Beacon is a place that’s near and dear to my heart,” she said before introducing Smith and Hutcherson. “I know it is for many of you who are here tonight.”

The proclamation stated it is “fitting and proper to honor and pay tribute to Beacon, who provided livelihoods for thousands of employees and families in the Swannanoa Valley for over four generations,” and cited the company’s production of 7 million blankets used in World War II.

“Beacon was the largest manufacturing facility in America, and in the world, for a number of years between 1925 and 2002,” the statement continued.

Smith, a native of Swannanoa and the president of Beacon Linens, had a longstanding relationship with the company. As an employee he was featured in a popular advertising campaign for the manufacturer. The print and television ads centered around Smith showcasing the quality of the blankets by using them for a variety of things, like hanging from a helicopter.

“That was so much fun,” Smith said of the Adventures of Teddy campaign. “Giving credit where credit is due, the ads were the idea of Randall Chestnut, who is still a good friend of mine. He wanted to involve the company, the employees, the retail customers in an entertaining way.”

Smith was one of the managing partners of Beacon Manufacturing when it shut its doors for good.

“I grew up in Grovemont and both of my parents worked at Beacon,” he said. “It hit me really hard to see people walk out of that building for the final time. It's a feeling that never really leaves you” 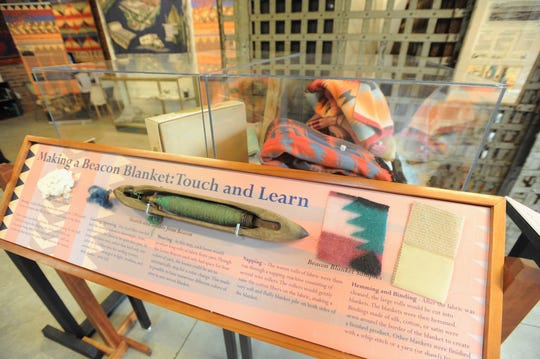 A display in the Beacon Blankets: The Mill exhibit in the Swannanoa Valley Museum & History Center, provides an opportunity to touch materials used by the manufacturer to make blankets. The museum will host Beacon Blankets Make Warm Friends Day on Oct. 5. (Photo: Fred McCormick)

The building, which Charles D. Owen II had moved by railroad from its original New Bedford, Massachusetts site, was destroyed by a massive fire in 2003. The blaze originated, the investigation found, when a teenager ignited a pipe bomb in the shuttered facility.

In the years since, the blankets sporting the Native American-inspired designs have become collector’s items, fetching as much as $2,000 among traders.

"When we were getting ready to retire we had several conversations about why we shouldn't retire," said Hutcherson, whose professional background is largely in top-of-the-bed products like sheets, comforters and bed spreads. "We decided that we should take our combined experience and create something special, which is what we've done."

Beacon Linens focuses on making quality products at affordable prices, according to Hutcherson.

"As far as our blankets go, we sell imported blankets and some that are made at Manual Weavers and Woodworkers in Hendersonville," Hutcherson said. "People were interested in them from the very first day."

The blankets are made from a unique blend of cotton and acrylic, Hutcherson continued.

"We blend it so when you're touching our blanket, you're touching mostly cotton with a little synthetic wool mixed in," he said. "Our blanket feels good, you can put it next to the skin on your back and it will feel better than anything you've worn. Also, caring for our blankets costs less because they're machine washable."

The partners hope the success of their products will bring the Beacon name back to the Swannanoa Valley.

"Eventually, our goal is to bring some jobs back to the area," Hutcherson said. "We need to be in a position to support it financially first, but I'd be willing to bet that we'll start being able to provide jobs in the next three to five years."

Smith and Hutcherson will show samples of their blankets featuring the vintage patterns during the event at the museum, which will continue featuring its Beacon Blankets: The Mill exhibit until Nov. 8. 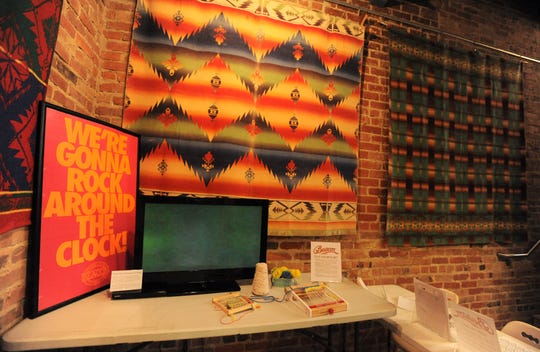 "Before we started brainstorming about the exhibit we were in touch with Tedd," said SVM Director Anne Chesky Smith. "We have quite a few Beacon catalogs in our archives featuring some of those vintage patterns and he would frequently come look through those."

Smith proved to be a valuable resource for the exhibit.

"He's featured in so many of the ads that we're featuring in the exhibit," Chesky Smith said. "Those ad campaigns are not only wonderful, but they contain some of the only footage we have from inside the mill."

It was Smith's idea to celebrate Beacon with a special day, she added.

"One of the best parts of this exhibit has been the former Beacon employees who have visited," Chesky Smith said. "We're hoping this event will bring in more, because so many of them have stories from their days working there."

"They literally wrote the book on Beacon," Chesky Smith said. "We're happy to have them as part of this event."

DeeAnn Carpenter, of Adore Designs, which repurposes vintage Beacon blankets and reproductions to create wearable coats, hats, vests and more, will be in attendance as well.

Part of the proceeds from purchases made during the celebration will benefit the museum.

Nearly two decades after the closing of Beacon, its name still carries a special significance in the Swannanoa Valley.

"It wasn't just a job to the people who worked there," Chesky Smith said. "That's a big part of the reason people still speak fondly of Beacon, because in a lot of ways it was their whole life. For better or worse the mill was involved in almost every aspect of the lives of the people who worked there and their families. Not only did they pay them, they provided housing, recreation and credit at the stores in the community."

More than 600 people worked at Beacon Manufacturing for 25 years or more. Former employees of the mill will be among those to attend Beacon Blankets Make Warm Friends Day at the Swannanoa Valley Museum & History Center on Oct. 5. (Photo: Fred McCormick)

The role the factory played in the lives left a void for area residents after its closing, and the subsequent fire that destroyed the massive building,

"Even though it only employed around 300 people when it closed, it was a huge loss for the entire community," Chesky Smith said. "When it burned, people compared it to seeing their own house burn down."

The idea that the Beacon name could one day return sparks hope for those who still remember their time working there fondly.

"Just knowing that Beacon is back, and may one day be in a position to start producing around here is a huge deal," Chesky Smith said.