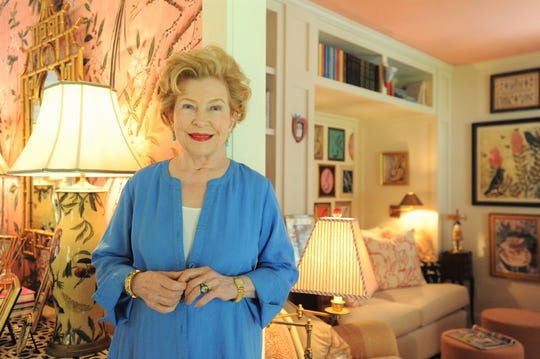 “The human mind is in itself a world with huge mountains, deep valleys and forests of the unknown,” writes John O’Donohue, in his book, “Beauty.” It is fitting, then, that a popular novelist would come to roost in Black Mountain, where the terrain matches that of O’Donohue’s imagination of the mind.

In fact, it is among the first reasons best-selling author Jan Karon mentions when asked why she is spending more time here.

“These mountains have a particular enchantment for me,” Karon said, from her Black Mountain cottage. “While some mountains further north roll and are low and serene, our mountains stand right up in our faces and you can have conversations with them.”

The beloved author, with her undeniable charm, is most famous for a series of 14 novels set in the fictional town of Mitford, now one of the most memorable towns in contemporary fiction. The 1994 inaugural book, "At Home in Mitford," has been reprinted more than 80 times and was nominated three times for an American Booksellers Book of the Year Award.

The Mitford series quickly garnered millions of fans across the globe. In 2014, Mitford fans packed the Ridgecrest auditorium at Karon’s first public appearance in Black Mountain for the First International Mitford Homecoming. In addition to the Mitford novels, which have topped the best-seller lists of The New York Times and The Wall Street Journal, Karon has authored 12 other books, including some for children and a cookbook spun from dishes served in Mitford.

The small-town girl born on a humble farm outside Hudson has quietly bought, renovated and meticulously decorated a small home in Black Mountain. But she has strong ties to Virginia, particularly the Charlottesville area.

Virginia bestowed upon her one of its most prestigious literary honors, a Lifetime Achievement Award from the Library of Virginia. Other authors receiving the award have been Tom Wolfe, Rita Dove, and Edgar Allan Poe. Hundreds of boxes of Karon’s business and personal papers, videocassettes and audiocassettes are archived at the University of Virginia in its Special Collections.

The primary reason Karon landed here is to enjoy time with her daughter and only child, Candace Freeland, who relocated from Hawaii to Black Mountain several years ago. Freeland is a musician, composer and award-winning photographer who took the cover photos for three of her mother’s novels, "Somewhere Safe With Somebody Good," "Come Rain or Come Shine," and "To Be Where You Are."

It wasn’t long before Karon began to experience the small town charm that Black Mountain is known for. One of the defining characteristics of a community is a sense of connection, and that is precisely what the novelist-at-rest finds nourishing about her new neighborhood.

Neighbors who will let you know when a bear is loping down the street, who smile and wave as they stroll by, this is Black Mountain.

Initially, some of the New York City literary critics complained that the town Karon created was unrealistic, that the people were too good, too nice. But she stood firm and kept writing about the people of Mitford. Her answer to naysayers is simply: “That’s because you haven’t lived in small town.”

“In many ways, Black Mountain exceeds some of the ambitions I had for Mitford," Karon said. "I have been welcomed with affection, love and the kind of friendliness that I wasn’t sure still existed.”

Karon event to benefit the library

She learned to read when she was 5, and although the local library was too far to walk to, Karon later developed a healthy dependency on libraries. We can thank one of our nation’s founders, Ben Franklin, for our library system, initiated in concept when he proposed to his friends that they pool their books all in the same place and come together to read them “which would be nearly as beneficial as if each owned the whole.”

When Karon was approached by folks at the Black Mountain Library to give a talk as a fundraiser, she accepted enthusiastically.

Tickets are sold out for her upcoming event in Blue Ridge Assembly, fittingly called “At Home in Black Mountain.” Proceeds from the Sunday, Oct. 6 event will help the library achieve a larger vision, said Gwyn Ridenhour, the head of Friends of The Library.

“We are in a new era with the library, which is such a literary and cultural cornerstone of our town,” Ridenhour said. She credits branch manager Melisa Pressley with expanding programming, improving the collection, and enhancing the facility. “The October event not only raises supplemental funds for our branch, it also ties the library to a unique and meaningful community program,” Ridenhour said.

Aging with balance and Grace

Now in her 80s, relaxing in Black Mountain is part of a well-deserved break in Karon’s constant production of novels. She still travels frequently, for business and pleasure, but is increasingly spending more time here.

Karon’s millions of fans pay rapt attention to her Facebook page, where recent posts from her iPad include photos of her office and a musing about being “raised on livermush.”

She is an unapologetic Southerner and woman of great faith. Online, and in public speaking events here and there, Karon remains a font of unbounded encouragement and a wisdom borne from a lifetime of keenly observing the people and places around her.

Time will tell if the village-like nature of Black Mountain can romance the mind of this novelist for the long term.

“I am exploring how to live out my life with balance and grace,” Karon said.